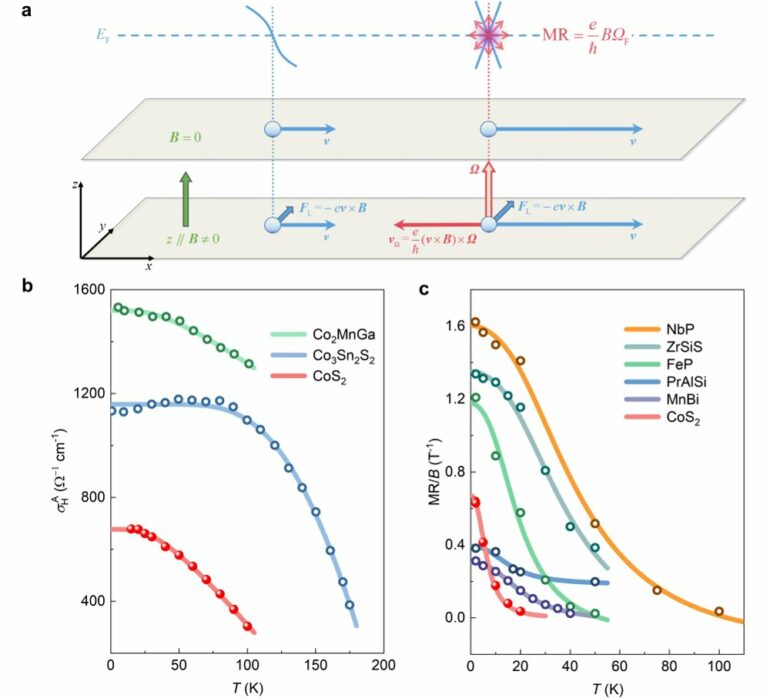 A research group lead by Prof. Liu Enke from the Institute of Physics of the Chinese Academy of Sciences (CAS) has established a physical model of Berry-curvature-dominated linear positive magnetoresistance (LPMR), providing experimental evidence for this mechanism.

Relevant results were published in PNAS on Nov. 2.

In view of this, researchers in Liu’s group and their collaborators investigated the relation between Berry curvature and LPMR based on a topological material candidate, cobalt disulfide (CoS2).

Their study showed that, in theory, the slope of LPMR is proportional to the average of the Berry curvature around the Fermi surface.

They proposed temperature-dependent anomalous Hall conductivity and LPMR equations based on a 3D-Weyl-node model. The experimental data of CoS2 and other topological materials reported previously can be fitted to the theoretical temperature-dependent equations, which is evidence for Berry-curvature-dominated LPMR.

This study unveils the relationship between Berry curvature and LPMR, thus facilitating the understanding and functional design of LPMR materials for magnetic sensing or information storage.