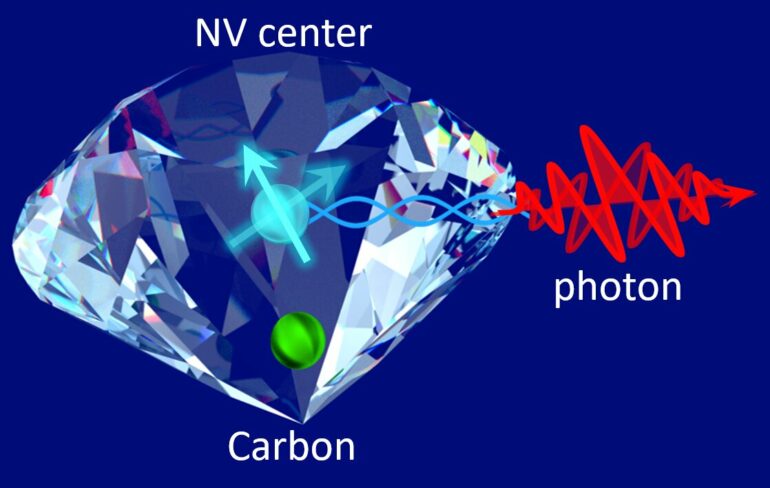 Flaws in diamonds—atomic defects where carbon is replaced by nitrogen or another element—may offer a close-to-perfect interface for quantum computing, a proposed communications exchange that promises to be faster and more secure than current methods. There’s one major problem, though: These flaws, known as diamond nitrogen-vacancy centers, are controlled via magnetic field, which is incompatible with existing quantum devices. Imagine trying to connect an Altair, an early personal computer developed in 1974, to the internet via WiFi. It’s a difficult, but not impossible task. The two technologies speak different languages, so the first step is to help translate.

Researchers at Yokohama National University have developed an interface approach to control the diamond nitrogen-vacancy centers in a way that allows direct translation to quantum devices. They published their method on December 15 in Communications Physics.

“To realize the quantum internet, a quantum interface is required to generate remote quantum entanglement by photons, which are a quantum communication medium,” said corresponding author Hideo Kosaka, professor in the Quantum Information Research Center, Institute of Advanced Sciences and in the Department of Physics, Graduate School of Engineering, both at Yokohama National University. “

The promised quantum internet is rooted in more than a century’s worth of work in which researchers determined that photons are both particles and waves of light simultaneously—and that their wave state can reveal information about their particle state and vice versa. More than that, the two states could influence each other: pinching the wave could bruise the particle, so to speak. Their very nature is entangled, even across vast distances. The aim is to control the entanglement to communicate discrete data instantaneously and securely.

Previous research has demonstrated this controlled entanglement can be achieved by applying a magnetic field to the nitrogen-vacancy centers, Kosaka said, but a non-magnetic field approach is needed to move closer to realizing the quantum internet.

His team successfully used microwave and light polarized waves to entangle an emitted photon and left spin qubits, the quantum equivalent of information bits in classical systems. These polarizations are waves that move perpendicular to the originating source, like seismic waves radiating out horizontally from a vertical fault shift. In quantum mechanics, the spin property—either right- or left-handed—of the photon determines how the polarization moves, meaning it is predictable and controllable. Critically, according to Kosaka, when inducing entanglement via this property under a non-magnetic field, the connection appears steadfast against other variables.

“The geometric nature of polarizations allows us to generate remote quantum entanglement that is resilient to noise and timing errors,” Kosaka said.

According to Kosaka, his team will combine this approach with a previously demonstrated quantum information transfer via teleportation to generate quantum entanglement, and the resulting exchange of information, between remote locations. The eventual goal, Kosaka said, is to facilitate a connected network of quantum computers to establish a quantum internet.

“The realization of a quantum internet will enable quantum cryptography, distributed quantum computation and quantum sensing over long distances of more than 1,000 kilometers,” Kosaka said.