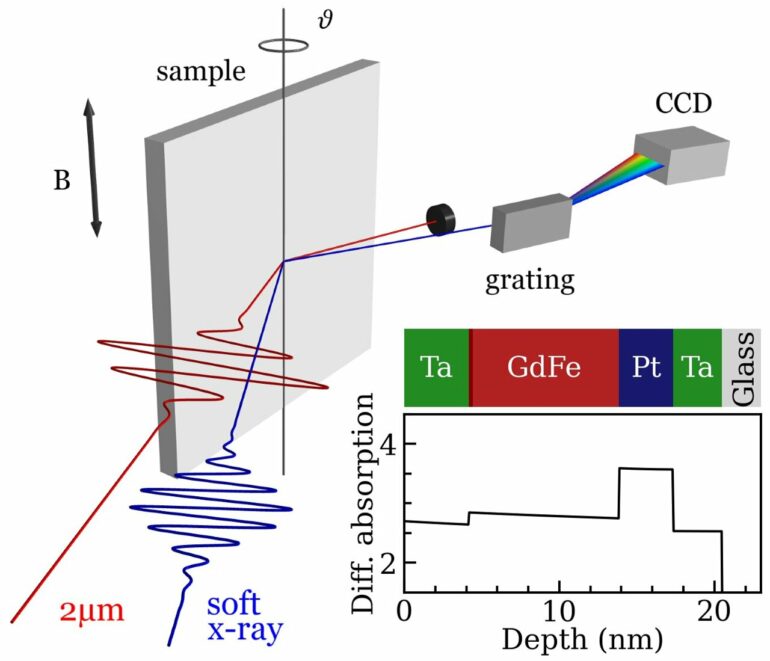 The future development of functional magnetic devices based on ultrafast optical manipulation of spins requires an understanding of the depth-dependent spin dynamics across the interfaces of complex magnetic heterostructures. A novel technique to obtain such an “in depth” and time-resolved view on the magnetization has now been demonstrated at the Max Born Institute in Berlin, employing broadband femtosecond soft X-ray pulses to study the transient evolution of magnetization depth profiles within a magnetic thin film system.

In current information technology, functional magnetic devices typically consist of stacks of thin layers of magnetic and nonmagnetic materials, each only about one nanometer thick. The stacking, choice of atomic species, and the resulting interfaces between the layers are key to the particular function, for example as realized in the giant magnetoresistance read heads in all magnetic hard drives. Over the last few years, it was shown that ultrashort laser pulses down to the femtosecond range (1 femtosecond = 10-15 s) can effectively and very fast manipulate the magnetization in a material, allowing a transient change or even permanent reversal of the magnetization state. While these effects have been predominantly studied in simple model systems, future applications will require an understanding of magnetization dynamics in more complex structures with nanometer-scale heterogeneity.

Researchers from Max Born Institute in Berlin together with their colleagues from Leibniz-Institut für Kristallzüchtung, Leibniz-Institut für Analytische Wissenschaften and Helmholtz-Zentrum Berlin have now demonstrated a novel technique that allows resolving the spatiotemporal evolution of laser-induced spin dynamics within a complex magnetic heterostructure on the femto- and picosecond timescale. Using ultrashort soft X-ray pulses of about 8 nanometer wavelength generated by a broadband laboratory-scale source based on High-Harmonic-Generation (HHG), they were able to follow the magnetization depth profile evolving within a 10-nanometer thin ferrimagnetic iron-gadolinium (FeGd) layer after it was hit by a femtosecond infrared (IR) laser pulse. The basic sensitivity to the magnetization stems from the transverse magneto-optical Kerr effect (T-MOKE) which leads to a magnetization-dependent reflectivity in combination with being element-specific. To obtain depth information within the structure, the team developed the following approach: When the wavelength of the radiation is close to an atomic resonance, its penetration depth into the material strongly changes. How far certain spectral components of the broadband soft X-ray pulse can “look” into the material thus depends on their exact wavelength. Consequently, this depth-information can be