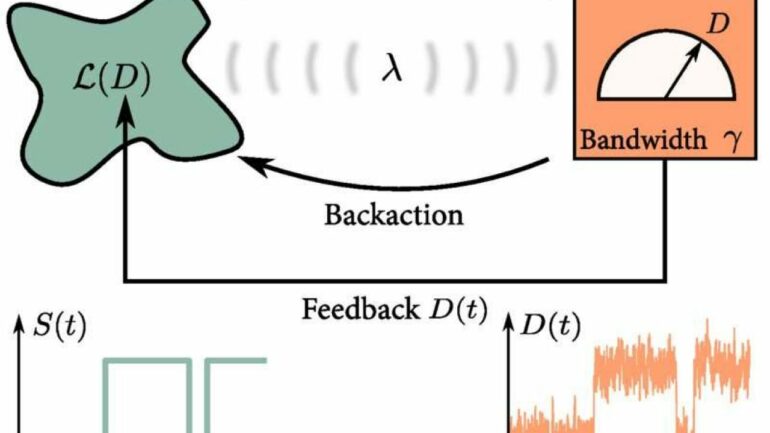 As the size of modern technology shrinks down to the nanoscale, weird quantum effects—such as quantum tunneling, superposition, and entanglement—become prominent. This opens the door to a new era of quantum technologies, where quantum effects can be exploited. Many everyday technologies make use of feedback control routinely; an important example is the pacemaker, which must monitor the user’s heartbeat and apply electrical signals to control it, only when needed. But physicists do not yet have an equivalent understanding of feedback control at the quantum level. Now, physicists have developed a “master equation” that will help engineers understand feedback at the quantum scale. Their results are published in the journal Physical Review Letters.

“It is vital to investigate how feedback control can be used in quantum technologies in order to develop efficient and fast methods for controlling quantum systems, so that they can be steered in real time and with high precision,” says co-author Björn Annby-Andersson, a quantum physicist at Lund University, in Sweden.

An example of a crucial feedback-control process in quantum computing is quantum error correction. A quantum computer encodes information on physical qubits, which could be photons of light, or atoms, for instance. But the quantum properties of the qubits are fragile, so it is likely that the encoded information will be lost if the qubits are disturbed by vibrations or fluctuating electromagnetic fields. That means that physicists need to be able to detect and correct such errors, for instance by using feedback control. This error correction can be implemented by measuring the state of the qubits and, if a deviation from what is expected is detected, applying feedback to correct it.

But feedback control at the quantum level presents unique challenges, precisely because of the fragility physicists are trying to mitigate against. That delicate nature means that even the feedback process itself could destroy the system. “It is necessary to only interact weakly with the measured system, preserving the properties we want to exploit,” says Annby-Andersson.

It is thus important to develop a full theoretical understanding of quantum feedback control, to establish its fundamental limits. But most existing theoretical models of quantum feedback control require computer simulations, which typically only provide quantitative results for specific systems. “It is difficult to draw general, qualitative conclusions,” Annby-Andersson says. “The few models that can provide qualitative understanding are only applicable on a narrow class of feedback controlled systems—this type of feedback is typically referred to as linear feedback.”

Annby-Andersson and his colleagues have now developed a master equation, called a “Quantum Fokker-Planck equation,” that enables physicists to track the evolution of any quantum system with feedback control over time. “The equation can describe scenarios that go beyond linear feedback,” says Annby-Andersson. “In particular, the equation can be solved with pen and paper, rather than having to rely on computer simulations.”

The team tested their equation by applying it to a simple feedback model. This confirmed that the equation provides physically sensible results and also demonstrated how energy can be harvested in microscopic systems, using feedback control. “The equation is a promising starting point for future studies of how energy may be manipulated with the help of information on a microscopic level,” says Annby-Andersson.

The team is now investigating a system that makes use of feedback to manipulate energy in “quantum dots”—tiny semiconducting crystals just billionths of a meter across. “An important future direction is to use the equation as a tool for inventing novel feedback protocols that can be used for quantum technologies,” says Annby-Andersson.

Toward achieving megatesla magnetic fields in the laboratory