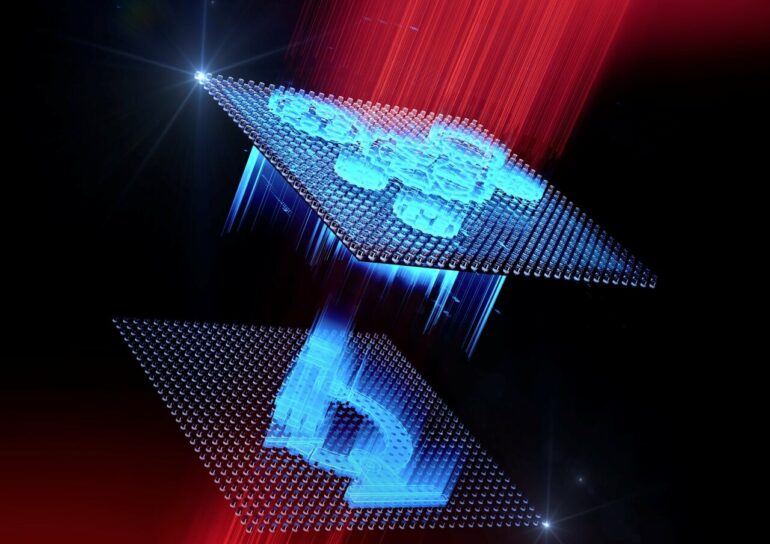 Physicists at The Australian National University (ANU) have developed tiny translucent slides capable of producing two very different images by manipulating the direction in which light travels through them.

As light passes through the slide, an image of Australia can be seen, but when you flip the slide and look again, an image of the Sydney Opera House is visible. The pair of images created is just one example of an untapped number of possibilities.

The ability to produce two distinctly different images is possible thanks to the ANU scientists’ ability to control the direction in which light can and can’t travel at the nanoscale. The development could pave the way for new light-based devices that could lead to faster, cheaper and more reliable Internet. It could also serve as the foundation for many of the technologies of tomorrow.

Developed in collaboration with colleagues from China, Germany and Singapore, the new technology uses nanoparticles, so small that about 12,000 of them can fit within a cross-section of a human hair. These tiny particles are arranged into unique patterns on the slides.

“The particles control the flow of light like road signs control traffic on a busy road by manipulating the direction in which light can, or can’t, travel,” project leader Dr. Sergey Kruk said.

“Some particles allow light to flow from left to right only, others from right to left or the pathway might be blocked in either direction.”

Dr. Lei Wang, from Southeast University in China says that “while the purpose of these images is mainly artistic, they demonstrate the potential for this new technology.”

“In real-world applications these nanoparticles can be assembled into complex systems that would control the flow of light in a useful manner—such as in next-generation communications infrastructure.”

According to Dr. Kruk, the ability to control the flow of light at the nanoscale ensures light “goes where it’s supposed to go and doesn’t go where it’s not supposed to.”

“We exchange enormous amounts of information with the help of light. When you make a video call, say, from Australia to Europe, your voice and image get converted into short pulses of light that travel thousands of kilometers through an optical fiber over the continents and oceans,” Dr. Kruk, from the ANU Nonlinear Physics Centre, said.

“Unfortunately, when we use current light-based technologies to exchange information a lot of parasitic effects might occur. Light might get scattered or reflected, which compromises your communication.”

“By ensuring light flows exactly where it needs to flow, we would resolve many issues with current technologies.”

According to Dr. Kruk, the development of many technologies of tomorrow will rely heavily on our ability to control light at a tiny scale.

Speed of sound used to measure elasticity of materials

“Control over the flow of electricity at the nanoscale is what ultimately brought us modern computers and smartphones. It is therefore exciting to envision the potential of our emerging technology for controlling flow of light.”

The research is published in Nature Photonics.