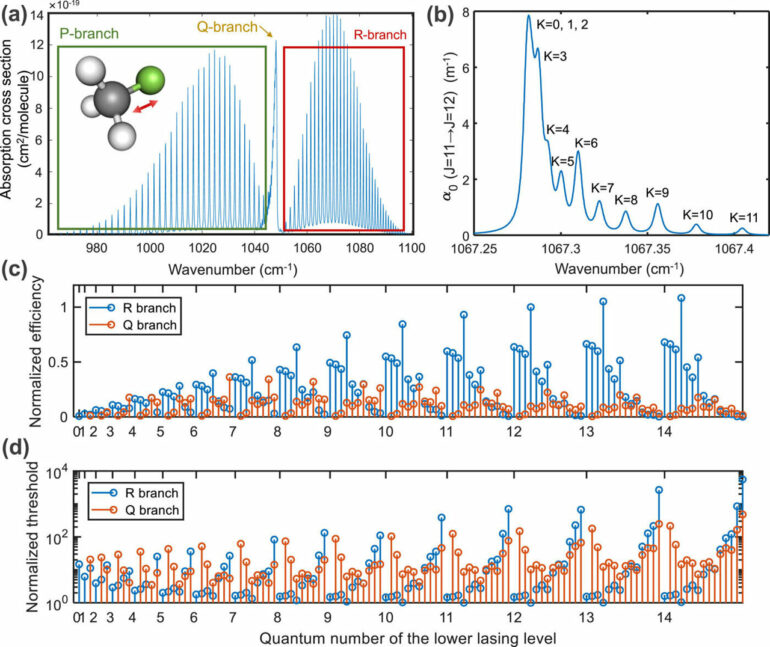 Researchers have taken a major step towards bringing terahertz frequencies out of their hard-to-reach region of the electromagnetic spectrum and into everyday applications. In a new paper, the researchers demonstrate a first-of-its-kind terahertz laser that is compact, operates at room temperature and can produce 120 individual frequencies spanning the 0.25–1.3 THz, far more range than previous terahertz sources.

The laser could be used in a range of applications, such as skin and breast cancer imaging, drug detection, airport security and ultrahigh-capacity optical wireless links.

The research, conducted by a team from at theHarvard John A. Paulson School of Engineering and Applied Sciences(SEAS), in collaboration with the DEVCOM Army Research Lab and DRS Daylight Solutions, is published inAPL Photonics.

“This is a leap-ahead technology for generating terahertz radiation,” saidFederico Capasso, the Robert L. Wallace Professor of Applied Physics and Vinton Hayes Senior Research Fellow in Electrical Engineering at SEAS and senior author of the paper. “Thanks to its compactness, efficiency, wide tuning range, and room temperature operation, this laser has the potential to become a key technology to bridge the terahertz gap for applications in imaging, security, or communications.”

The terahertz frequency range—which sits in the middle of the electromagnetic spectrum between microwaves and infrared light—has remained difficult to reach for applications because most terahertz sources are either very bulky, inefficient, or rely on low-temperature devices to produce these elusive frequencies with limited tuning.

In 2019, the Capasso Group, in collaboration with MIT and the U.S. Army, developed a prototype that proved terahertz frequency sources could be compact, room temperature and widely tunable by combing a quantum cascade laser pump with a nitrous oxide molecular laser.

The new research more than triples the tuning range of that prototype. Among other advances, the new laser replaces nitrous oxide with methyl fluoride, a molecule that reacts strongly with optical fields.

“This compound is really good at absorbing infrared and emitting terahertz,” said Arman Amirzhan, a graduate student at SEAS and first author of the paper. “By using methyl fluoride, which is non-toxic, we increased the efficiency and tuning range of laser.”

“Methyl fluoride has been used as a terahertz laser for almost 50 years, but it only generates a couple of laser frequencies when pumped by a bulky carbon dioxide laser,” said Henry Everitt, the U.S. Army’s senior technologist for optical sciences, and co-author of the paper. “The two innovations we report, a compact laser cavity pumped by a quantum cascade laser, combine to give methyl fluoride the ability to lase on hundreds of lines.”

This laser already has the potential to be one of the most compact terahertz lasers ever designed and the researchers aim to make it even more compact.

“A less than a cubic foot device will enable us to target this frequency range for even more applications in short-range communications, short-range radar, biomedicine and imaging,” said Paul Chevalier, a research associate at SEAS and lead researcher of the team.

“The combination of mature, compact, quantum cascade lasers with molecular laser gain media has resulted in a very robust THz laser platform with a wide range of applications from fundamental research, to THz molecular detection and imaging, THz communications and security and beyond,” said Timothy Day, Senior Vice President and General Manager of DRS Daylight Solutions and co-author of the paper.