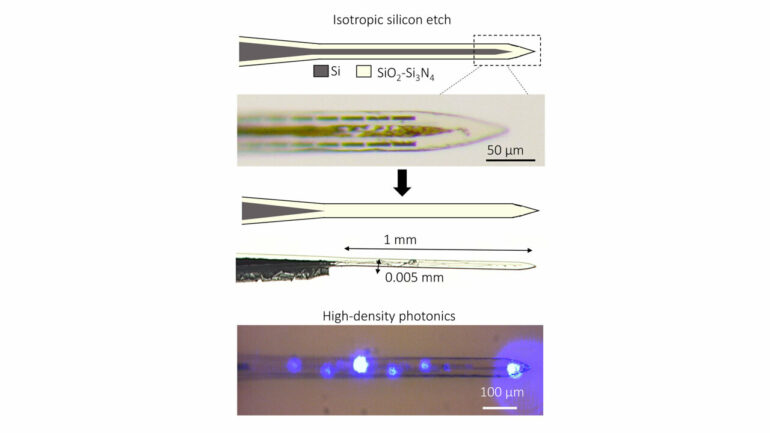 The use of electrodes placed inside the brains of laboratory specimens has pushed the field of neuroscience to new findings for decades. Common silicon-based electrodes rely on established production methods but are stiff and prone to injuring the brain. More pliable polymer-based electrodes avoid these issues but are difficult to scale, especially when integrating light emitters for neuron stimulation.

Researchers at Lawrence Berkeley National Laboratory developed a technique for assembling optoelectrodes that looks to offer the best of both worlds. In Journal of Vacuum Science & Technology B, the scientists demonstrated it is possible to efficiently create a semiflexible light-emitting electrode by removing the stiff silicon material from underneath the tip of the probe.

The resulting device, called an optoelectrode, can study deep brain tissues with high resolution to record signals from individual nerve cells and stimulate small groups of neurons with state-of-the-art techniques such as optical waveguides.

“It is challenging to implant polymer probes in the brain, but we’ve developed a very simple fabrication technique to address this,” said author Vittorino Lanzio. “They’re less challenging to insert, because they don’t need to be glued to a silicon or tungsten shuttle, which increases the footprint of the device during insertion.”

Optoelectrodes are currently reserved for short-term use in laboratory animals. Despite the new electrode being an important step toward better biocompatibility, much more needs to be developed to bring long-term electrode use to humans.

The minute movements of breathing and pulses of blood flow subtly joggle the brain, even at rest. Microscopic shifts can disrupt an electrode’s performance and damage brain structures. These injuries can alert immune cells that hamper electrode function.

“The consistency of the brain is even more floppy than jelly,” said author Stefano Cabrini.

The optoelectrode is made of oxide glass and nitride initially bound to silicon. The group uses a nanoscale etching technique to remove the silicon underneath the device insertion area.

The team tested the device through experiments in rats and found that the semiflexible device, which packs 64 individual electrodes and high-density photonics into a significantly smaller cross-sectional area, could be inserted into a rat brain without using a silicon or tungsten shuttle.

The researchers hope neuroscientists put the new device to work and integrate more functionality into the electrodes, such as microfluidics to deliver chemicals into the brain, as the field progresses.

Resolving the puzzles of graphene superconductivity