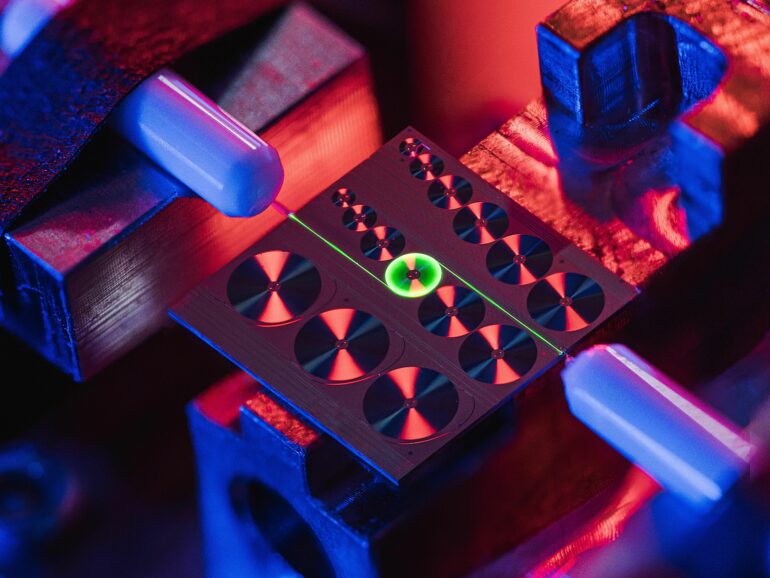 The ability to achieve quantum-limited amplification of optical signals contained in optical fibers is arguably among the most important technological advances that are underlying our modern information society. In optical telecommunications, the choice of 1550 nm wavelength band is motivated not only by loss minima of silica optical fibers (a development recognized with the 2008 Nobel Prize in Physics), but equally by the existence of ways to amplify these signals, crucial to achieve trans-oceanic fiber optical communication.

Optical amplification plays a key role in virtually all laser-based technologies such as optical communication, used for instance in data-centers to communicate between servers and between continents through trans-oceanic fiber links, to ranging applications like coherent Frequency Modulated Continuous Wave (FMCW) LiDAR—an emerging technology that can detect and track objects farther, faster, and with greater precision than ever before.

Today, optical amplifiers based on rare-earth ions like erbium, as well as III-V semiconductors, are widely used in real-world applications.

It has been known since the 80’s that the intrinsic nonlinearity of optical fibers can also be harnessed to create traveling-wave optical parametric amplifiers, whose gain is independent of atomic or semiconductor transitions, which means that it can be broad-band and virtually cover any wavelength.

Parametric amplifiers also do not suffer from a minimum input signal, which means that they can be used to amplify both the faintest signals and large input power in a single setting. And finally, the gain spectrum can be tailored by waveguide geometry optimization and dispersion engineering, which offers enormous design flexibility for target wavelengths and applications.

Most intriguingly, parametric gain can be derived in unusual wavelength bands that are out of reach of conventional semiconductors or rare-earth-doped fibers. Parametric amplification is inherently quantum-limited, and can even achieve noiseless amplification.

Despite their attractive features, optical parametric amplifiers in fibers are compounded by their very high pump power requirements resulting from the weak Kerr nonlinearity of silica. Over the past two decades, the advances in integrated photonic platforms have enabled significantly enhanced effective Kerr nonlinearity that cannot be achieved in silica fibers, but have not achieved continuous-wave-operated amplifiers.

“Operating in the continuous-wave regime is not a mere ‘academic achievement’,” says Professor Tobias Kippenberg, head of EPFL’s Laboratory of Photonics and Quantum Measurements at EPFL.

“In fact, it is crucial to the practical operation of any amplifier, as it implies that any input signals can be amplified—for example, optically encoded information, signals from LiDAR, sensors, etc. Time- and spectrum-continuous, traveling-wave amplification is pivotal for successful implementation of amplifier technologies in modern optical communication systems and emerging applications for optical sensing and ranging.”

A new study led by Dr. Johann Riemensberger in Kippenberg’s group has now addressed the challenge by developing a traveling-wave amplifier based on a photonic integrated circuit operating in the continuous regime. “Our results are a culmination of more than a decade of research effort in integrated nonlinear photonics and the pursuit of ever lower waveguide losses,” says Riemensberger.

The researchers used an ultralow-loss silicon nitride photonic integrated circuit more than two meters long to build the first traveling-wave amplifier on a photonic chip 3×5 mm2 in size. The chip operates in the continuous regime and provides 7 dB net gain on-chip and 2 dB net gain fiber-to-fiber in the telecommunication bands. On-chip net-gain parametric amplification in silicon nitride was also recently achieved by the groups of Victor Torres-Company and Peter Andrekson at Chalmers University.

In the future, the team can use precise lithographic control to optimize the waveguide dispersion for parametric gain bandwidth of more than 200 nm. And since the fundamental absorption loss of silicon nitride is very low (around 0.15 dB/meter), further fabrication optimizations can push the chip’s maximum parametric gain beyond 70 dB with only 750 mW of pump power, exceeding the performance of the best fiber-based amplifiers.

“The application areas of such amplifiers are unlimited,” says Kippenberg. “From optical communications where one could extend signals beyond the typical telecommunication bands, to mid-infrared or visible laser and signal amplification, to LiDAR or other applications where lasers are used to probe, sense and interrogate classical or quantum signals.”

The paper is published in the journal Nature.