Research places new limits on the bizarre behavior of neutrinos 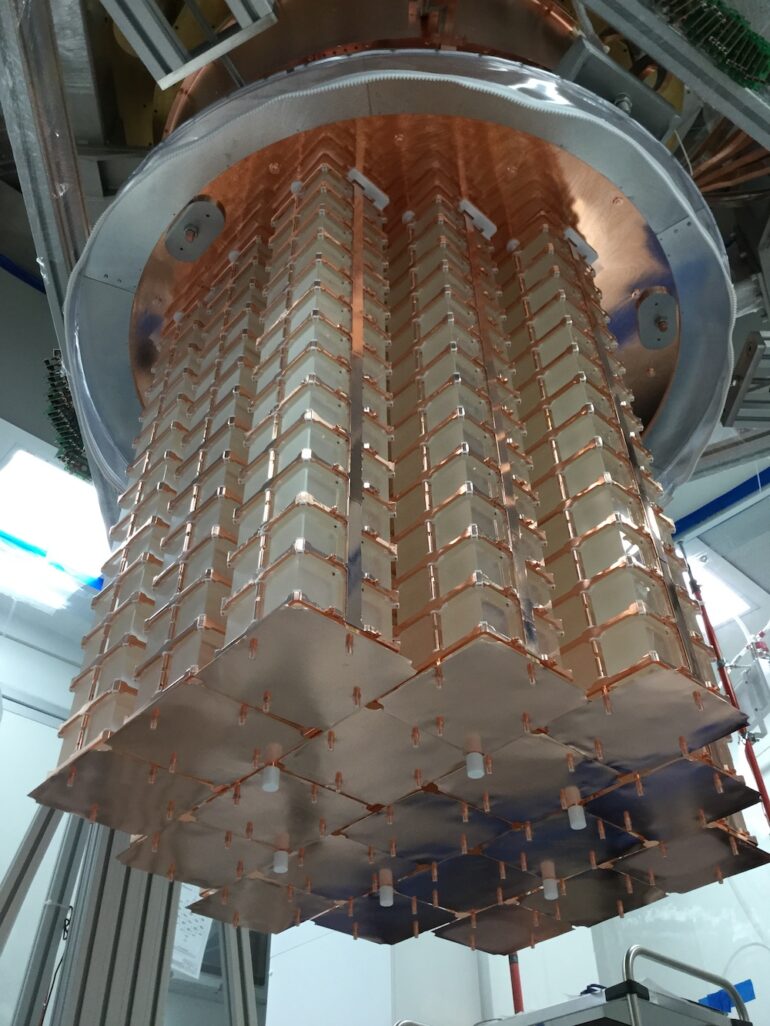 In a laboratory under a mountain, physicists are using crystals far colder than frozen air to study ghostly particles, hoping to learn secrets from the beginning of the universe. Researchers at the Cryogenic Underground Observatory for Rare Events (CUORE) announced this week that they had placed some of the most stringent limits yet on the strange possibility that the neutrino is its own antiparticle. Neutrinos are deeply unusual particles, so ethereal and so ubiquitous that they regularly pass through our bodies without us noticing. CUORE has spent the last three years patiently waiting to see evidence of a distinctive nuclear decay process, only possible if neutrinos and antineutrinos are the same particle. CUORE’s new data shows that this decay doesn’t happen for trillions of trillions of years, if it happens at all. CUORE’s limits on the behavior of these tiny phantoms are a crucial part of the search for the next breakthrough in particle and nuclear physics—and the search for our own origins.

“Ultimately, we are trying to understand matter creation,” said Carlo Bucci, researcher at the Laboratori Nazionali del Gran Sasso (LNGS) in Italy and the spokesperson for CUORE. “We’re looking for a process that violates a fundamental symmetry of nature,” added Roger Huang, a postdoctoral researcher at the Department of Energy’s Lawrence Berkeley National Laboratory (Berkeley Lab) and one of the lead authors of the new study.

CUORE—Italian for “heart”—is among the most sensitive neutrino experiments in the world. The new results from CUORE are based on a data set ten times larger than any other high-resolution search, collected over the last three years. CUORE is operated by an international research collaboration, led by the Istituto Nazionale di Fisica Nucleare (INFN) in Italy and Berkeley Lab in the US. The CUORE detector itself is located under nearly a mile of solid rock at LNGS, a facility of the INFN. U.S. Department of Energy-supported nuclear physicists play a leading scientific and technical role in this experiment. CUORE’s new results were published today in Nature.

Neutrinos are everywhere—there are trillions of neutrinos passing through your thumbnail alone as you read this sentence. They are invisible to the two strongest forces in the universe, electromagnetism and the strong nuclear force, which allows them to pass right through you, the Earth, and nearly anything else without interacting. Despite their vast numbers, their enigmatic nature makes them very difficult to study, and has left physicists scratching their heads ever since they were first postulated over 90 years ago. It wasn’t even known whether neutrinos had any mass at all until the late 1990s—as it turns out, they do, albeit not very much.

If neutrinos are Majorana fermions, that could explain a deep question at the root of our own existence: why there’s so much more matter than antimatter in the universe. Neutrinos and electrons are both leptons, a kind of fundamental particle. One of the fundamental laws of nature appears to be that the number of leptons is always conserved—if a process creates a lepton, it must also create an anti-lepton to balance it out. Similarly, particles like protons and neutrons are known as baryons, and baryon number also appears to be conserved. Yet if baryon and lepton numbers were always conserved, then there would be exactly as much matter in the universe as antimatter—and in the early universe, the matter and antimatter would have met and annihilated, and we wouldn’t exist. Something must violate the exact conservation of baryons and leptons. Enter the neutrino: if neutrinos are their own antiparticles, then lepton number wouldn’t have to be conserved, and our existence becomes much less mysterious.

“The matter-antimatter asymmetry in the universe is still unexplained,” said Huang. “If neutrinos are their own antiparticles, that could help explain it.”

Nor is this the only question that could be answered by a Majorana neutrino. The extreme lightness of neutrinos, about a million times lighter than the electron, has long been puzzling to particle physicists. But if neutrinos are their own antiparticles, then an existing solution known as the “seesaw mechanism” could explain the lightness of neutrinos in an elegant and natural way.

A rare device for rare decays

But determining whether neutrinos are their own antiparticles is difficult, precisely because they don’t interact very often at all. Physicists’ best tool for looking for Majorana neutrinos is a hypothetical kind of radioactive decay called neutrinoless double beta decay. Beta decay is a fairly common form of decay in some atoms, turning a neutron in the atom’s nucleus into a proton, changing the chemical element of the atom and emitting an electron and an anti-neutrino in the process. Double beta decay is more rare: instead of one neutron turning into a proton, two of them do, emitting two electrons and two anti-neutrinos in the process. But if the neutrino is a Majorana fermion, then theoretically, that would allow a single “virtual” neutrino, acting as its own antiparticle, to take the place of both anti-neutrinos in double beta decay. Only the two electrons would make it out of the atomic nucleus. Neutrinoless double-beta decay has been theorized for decades, but it’s never been seen.

The CUORE experiment has gone to great lengths to catch tellurium atoms in the act of this decay. The experiment uses nearly a thousand highly pure crystals of tellurium oxide, collectively weighing over 700 kg. This much tellurium is necessary because on average, it takes billions of times longer than the current age of the universe for a single unstable atom of tellurium to undergo ordinary double beta decay. But there are trillions of trillions of atoms of tellurium in each one of the crystals CUORE uses, meaning that ordinary double beta decay happens fairly regularly in the detector, around a few times a day in each crystal. Neutrinoless double beta decay, if it happens at all, is even more rare, and thus the CUORE team must work hard to remove as many sources of background radiation as possible. To shield the detector from cosmic rays, the entire system is located underneath the mountain of Gran Sasso, the largest mountain on the Italian peninsula. Further shielding is provided by several tons of lead. But freshly mined lead is slightly radioactive due to contamination by uranium and other elements, with that radioactivity decreasing over time—so the lead used to surround the most sensitive part of CUORE is mostly lead recovered from a sunken ancient Roman ship, nearly 2000 years old.

Perhaps the most impressive piece of machinery used at CUORE is the cryostat, which keeps the detector cold. To detect neutrinoless double beta decay, the temperature of each crystal in the CUORE detector is carefully monitored with sensors capable of detecting a change in temperature as small as one ten-thousandth of a Celsius degree. Neutrinoless double beta decay has a specific energy signature and would raise the temperature of a single crystal by a well-defined and recognizable amount. But in order to maintain that sensitivity, the detector must be kept very cold—specifically, it’s kept around 10 mK, a hundredth of a degree above absolute zero. “This is the coldest cubic meter in the known universe,” said Laura Marini, a research fellow at Gran Sasso Science Institute and CUORE’s Run Coordinator. The resulting sensitivity of the detector is truly phenomenal. “When there were large earthquakes in Chile and New Zealand, we actually saw glimpses of it in our detector,” said Marini. “We can also see waves crashing on the seashore on the Adriatic Sea, 60 kilometers away. That signal gets bigger in the winter, when there are storms.”

A neutrino through the heart

Despite that phenomenal sensitivity, CUORE hasn’t yet seen evidence of neutrinoless double beta decay. Instead, CUORE has established that, on average, this decay happens in a single tellurium atom no more often than once every 22 trillion trillion years. “Neutrinoless double beta decay, if observed, will be the rarest process ever observed in nature, with a half-life more than a million billion times longer than the age of the universe,” said Danielle Speller, Assistant Professor at Johns Hopkins University and a member of the CUORE Physics Board. “CUORE may not be sensitive enough to detect this decay even if it does occur, but it’s important to check. Sometimes physics yields surprising results, and that’s when we learn the most.” Even if CUORE doesn’t find evidence of neutrinoless double-beta decay, it is paving the way for the next generation of experiments. CUORE’s successor, the CUORE Upgrade with Particle Identification (CUPID) is already in the works. CUPID will be over 10 times more sensitive than CUORE, potentially allowing it to glimpse evidence of a Majorana neutrino.

But regardless of anything else, CUORE is a scientific and technological triumph—not only for its new bounds on the rate of neutrinoless double beta decay, but also for its demonstration of its cryostat technology. “It’s the largest refrigerator of its kind in the world,” said Paolo Gorla, a staff scientist at LNGS and CUORE’s Technical Coordinator. “And it’s been kept at 10 mK continuously for about three years now.” Such technology has applications well beyond fundamental particle physics. Specifically, it may find use in quantum computing, where keeping large amounts of machinery cold enough and shielded from environmental radiation to manipulate on a quantum level is one of the major engineering challenges in the field.