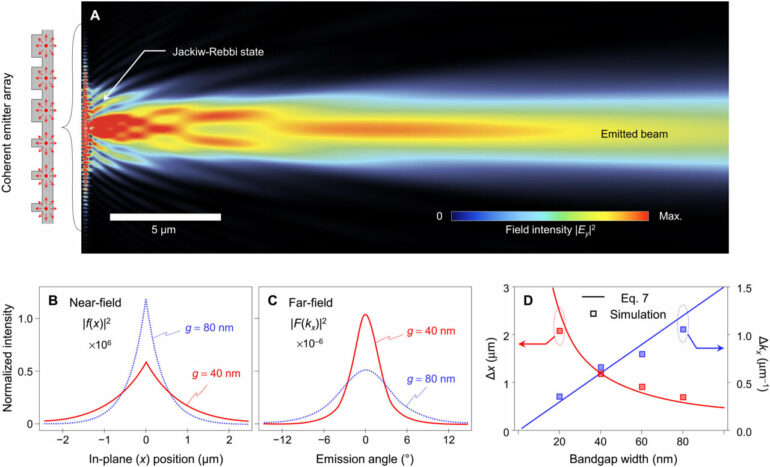 Scientists are increasingly studying quantum entanglement, which occurs when two or more systems are created or interact in such a manner that the quantum states of some cannot be described independently of the quantum states of the others. The systems are correlated, even when they are separated by a large distance. The significant potential for applications in encryption, communications and quantum computing spurs research. The difficulty is that when the systems interact with their surroundings, they almost immediately become disentangled.

In the latest study by the Laboratory for Coherent Manipulation of Atoms and Light (LMCAL) at the University of São Paulo’s Physics Institute (IF-USP) in Brazil, the researchers succeeded in developing a light source that produced two entangled light beams. Their work is published in Physical Review Letters.

“This light source was an optical parametric oscillator, or OPO, which is typically made up of a non-linear optical response crystal between two mirrors forming an optical cavity. When a bright green beam shines on the apparatus, the crystal-mirror dynamics produces two light beams with quantum correlations,” said physicist Hans Marin Florez, last author of the article.

The problem is that light emitted by crystal-based OPOs cannot interact with other systems of interest in the context of quantum information, such as cold atoms, ions or chips, since its wavelength is not the same as those of the systems in question. “Our group showed in previous work that atoms themselves could be used as a medium instead of a crystal. We therefore produced the first OPO based on rubidium atoms, in which two beams were intensely quantum-correlated, and obtained a source that could interact with other systems with the potential to serve as quantum memory, such as cold atoms,” Florez said.

However, this was not sufficient to show the beams were entangled. In addition to the intensity, the beams’ phases, which have to do with light wave synchronization, also needed to display quantum correlations. “That’s precisely what we achieved in the new study reported in Physical Review Letters,” he said.

“We repeated the same experiment but added new detection steps that enabled us to measure the quantum correlations in the amplitudes and phases of the fields generated. As a result, we were able to show they were entangled. Furthermore, the detection technique enabled us to observe that the entanglement structure was richer than would typically be characterized. Instead of two adjacent bands of the spectrum being entangled, what we had actually produced was a system comprising four entangled spectral bands.”

In this case, the amplitudes and phases of the waves were entangled. This is fundamental in many protocols to process and transmit quantum-coded information. Besides these possible applications, this kind of light source could also be used in metrology. “Quantum correlations of intensity result in a considerable reduction of intensity fluctuations, which can enhance the sensitivity of optical sensors,” Florez said. “Imagine a party where everyone is talking and you can’t hear someone on the other side of the room. If the noise decreases sufficiently, if everyone stops talking, you can hear what someone says from a good distance away.”

Enhancing the sensitivity of atomic magnetometers used to measure the alpha waves emitted by the human brain is one of the potential applications, he added.

The article also notes an additional advantage of rubidium OPOs over crystal OPOs. “Crystal OPOs have to have mirrors that keep the light inside the cavity for longer, so that the interaction produces quantum correlated beams, whereas the use of an atomic medium in which the two beams are produced more efficiently than with crystals avoids the need for mirrors to imprison the light for such a long time,” Florez said.

Before his group conducted this study, other groups had tried to make OPOs with atoms but failed to demonstrate quantum correlations in the light beams produced. The new experiment showed there was no intrinsic limit in the system to prevent this from happening. “We discovered that the temperature of the atoms is key to observation of quantum correlations. Apparently, the other studies used higher temperatures that prevented the researchers from observing correlations,” he said.