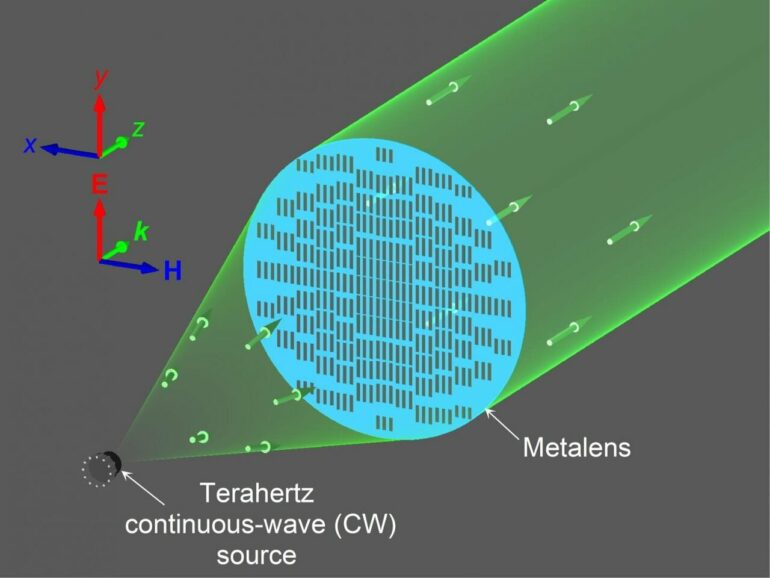 New terahertz devices such as biosensors and antennas in rapid communication systems stand to benefit from an analysis of a terahertz lens with a bull’s-eye structure conducted by an all-RIKEN team.

Terahertz waves are so-called because they typically have frequencies between 0.1 and 10 terahertz (1 terahertz is a trillion cycles per second). They are sandwiched between the microwave and infrared regions on the electromagnetic spectrum. New technologies based on terahertz waves are taking off in areas such as imaging, wireless communication and sensors.

Lenses consisting of concentric grooves are commonly used to focus terahertz waves in applications such as high-resolution imaging and antennas for rapid wireless communication. These bull’s-eye structures funnel propagating terahertz waves into apertures smaller than the wavelength of the terahertz radiation. But so far their focusing performance has been measured only for terahertz waves hitting them square on and not for waves that strike them obliquely.

“These lenses depend strongly on the angle of the impinging terahertz wave,” says Yu Tokizane of the RIKEN Center for Advanced Photonics. “This angle dependence has been ignored in previous studies because measurements at oblique incidence are difficult due to the low signal intensity. However, many practical applications of the terahertz bull’s-eye structure require various incident angles.”

Now, Tokizane, Hiroaki Minamide and three co-workers, all at the RIKEN Center for Advanced Photonics, have measured the response of a bull’s-eye structure lens to terahertz waves hitting it at angles between 0 and 8 degrees.

“Our results will be useful for optimizing the coupling efficiency of bull’s-eye antenna, a type of device that could be used in spectroscopic and ranging applications,” says Tokizane.

The team discovered that the lenses set up two resonances: a main resonance that varies with the incident angle and a side lobe to the main resonance. These results could be well reproduced by a simple model.

“The measured spectra of the bull’s-eye structure look complicated at first sight,” notes Tokizane. “However, our model describes the experimental results including tiny peaks, which makes us confident that the experimental results are not artifacts. In this study, it was interesting to discover that apparently complicated results are correct and only consequences of simple physical phenomena without fancy assumptions.”

The study is published in Physical Review Applied.