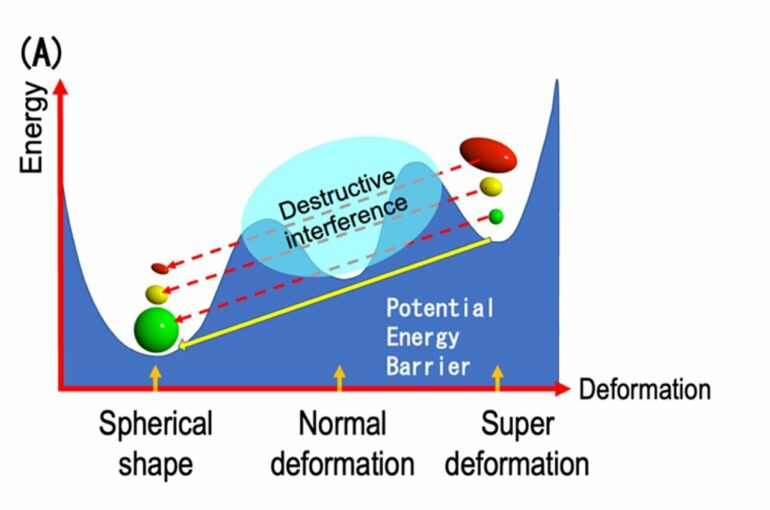 Scientists from the Research Center for Nuclear Physics at Osaka University, in collaboration with the Australian National University, Japan Atomic Energy Agency, the University of Tokyo, and GIT AM University, used measurements from a calcium foil irradiated with protons to infer the transition strength between different nuclear configurations in calcium-40. They found that quantum interference made the transition from the elongated “superdeformed” state to a normal, spherical state much less likely than expected. This work may lead to a better understanding of how elements are formed in supernovae.

In nuclear physics, some isotopes are called “magic” because they contain exactly the right number of protons or neutrons to form a complete shell. The first few magic numbers are 2, 8, 20, 28, and 50. Calcium-40, the most abundant form of calcium, is considered “doubly magic” because it has 20 protons and 20 neutrons in its nucleus. As a result, this isotope is very stable. With magic nuclei, various shapes of the nucleus may have very similar energies, so that coexistence can occur. This represents the quantum superposition of more than one conformation of protons and neutrons at the same time. However, the decay mechanism of a nucleus in the “superdeformed” conformation, shaped like an elongated rugby ball, into the lowest-energy spherical shape has been a major mystery.

Now, the team of researchers has used measurements of electron and positron emission from decay transitions between different states of calcium-40 nuclei to clarify the mechanism. “We observed evidence that the decay from the superdeformed excited state to the spherical ground state is unexpectedly suppressed in a calcium-40 nucleus,” first author Eiji Ideguchi says. The team found that the transition strength between these states is so small because of destructive quantum interference between coexisting shape configurations of similar energies.

To collect experimental data, protons were fired at a calcium target, and the resulting electrons and positrons emitted from excited states were measured. “This work deepens our understanding of coexisting deformation states that are unique to nuclei,” senior author Tibor Kibédi says. Their study will be published in Physical Review Letters, and this research may help scientists better understand the processes that give rise to the different elements in the universe, as well as the remarkable stability of magic nuclei.