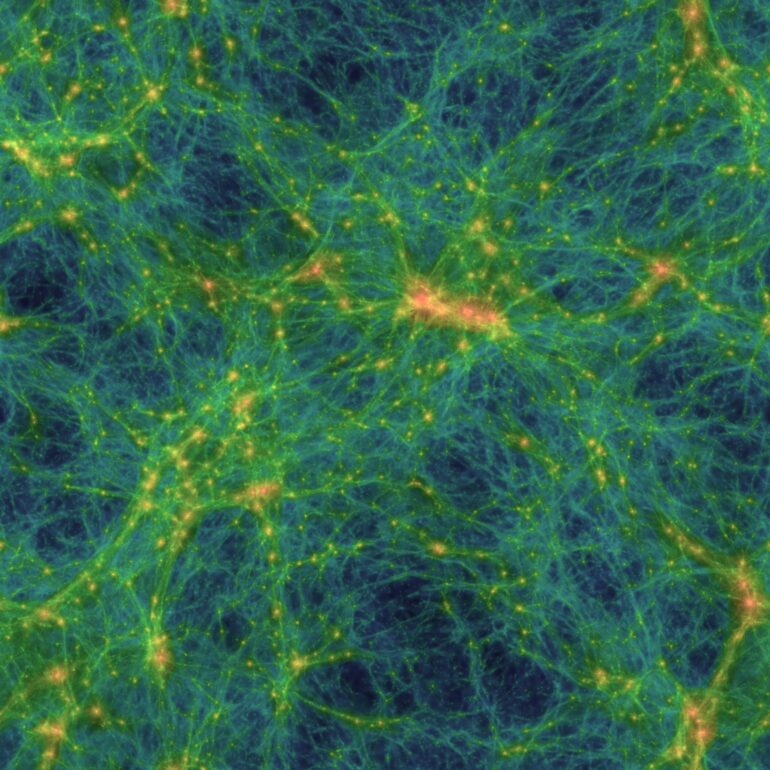 Dark matter could be made up of ultralight dark photons that heated up our universe: this is a new scenario proposed in a study recently published in Physical Review Letters. This hypothesis, the authors say, is in excellent agreement with observations made by the Cosmic Origin Spectrograph (COS) on board the Hubble Space Telescope, which takes measurements of the “cosmic web”, the complex and tenuous network of filaments that fills the space between galaxies.

The data collected by COS suggest that the cosmic intergalactic filaments are hotter than predictions from hydrodynamical simulations of the standard model of structure formation.

“Since dark photons would be able to convert into low-frequency photons and heat up the cosmic structures,” the scientists explain “they could well explain the experimental information.” The study has been carried out by SISSA researchers in collaboration with researchers at Tel Aviv, Nottingham and New York Universities.

“Dark photons are hypothetical new particles that are the force carriers for a new force in the dark sector, much like how the photon is the force carrier for electromagnetism,” the authors James S. Bolton (University of Notitngham), Andrea Caputo (CERN and Tel Aviv University), Hongwan Liu (New York University), and Matteo Viel (SISSA) explain.

“Unlike the photon, however, they can have mass. In particular, the ultralight dark photon—with a mass as small as twenty orders of magnitude less than that of the electron—is a good candidate for dark matter.”

Dark photons and regular photons are also expected to mix like the different types of neutrinos, allowing ultralight dark photon dark matter to convert into low-frequency photons. These photons will heat up the cosmic web but, unlike other heating mechanisms, based on astrophysical processes, such as star formation and galactic winds, this heating process is more diffuse and efficient also in regions that are not very dense.

Matteo Viel explains, “Usually, cosmic filaments have been used to probe small scale properties of dark matter, while in this case we have used for the first time the low redshift intergalactic medium data as a calorimeter, to check whether all the heating processes we are aware of are sufficient to reproduce the data. We found that this is not the case: there is something missing, that we model as a contribution produced by the dark photon”.

The work identified the mass and mixing of the dark photon with the Standard Model photon required to reconcile the discrepancy between observations and simulation; this effort could drive further theoretical and observational investigations in order to explore the exciting possibility that the dark photon could constitute the dark matter.


Citation:
Scientists find new hints that dark matter could be made up of dark photons (2022, December 12)