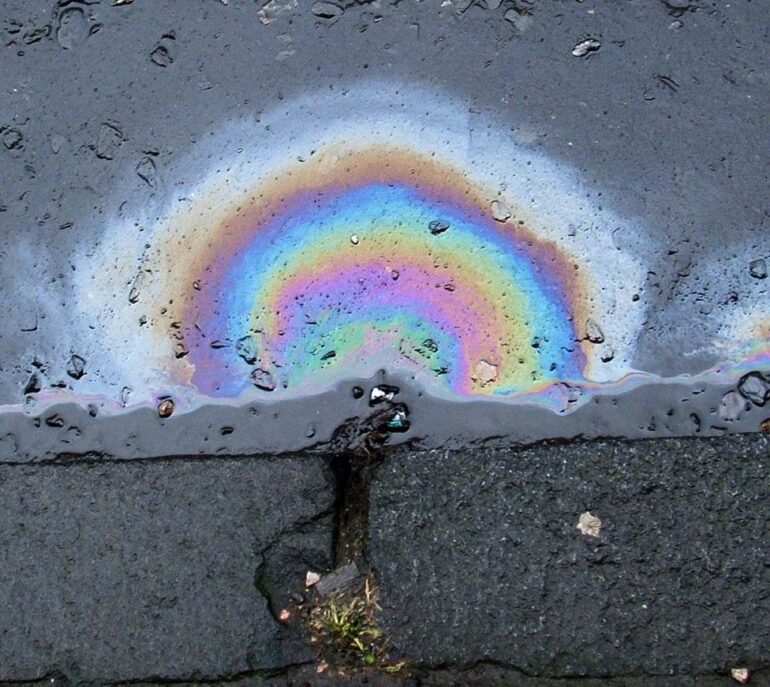 When sunlight reflects on an oily puddle of water in a parking lot, it creates a rainbow of swirling colors. That’s because of the thin film interference principle, which explains how light reflects off of different layers, or films, in a mixture of liquids.

For David Hoffman, an associate scientist at the Department of Energy’s SLAC National Accelerator Laboratory, however, what’s happening in those mixtures is a lot more than just pretty colors. The thin interfaces that produce those colors have major implications across biology, chemistry and the oil and pharmaceutical industries, among others. A key application is in chemical purification, where separating chemicals at their interfaces is at the heart of the process.

Still, getting a hold of the fundamental physics of thin interfaces like those in an oily puddle or in drug interactions has been a challenge. That’s because researchers essentially need to see through stacks and stacks of films to get to the exact point where two different liquids, such as oil and water, meet.

Now, Hoffman and colleagues may have found a solution: By shooting jets of water and oil at each other, they created liquid layers only a few hundreds of atoms thick. As a result, they could see more clearly what happened at the interfaces at which the liquids interact. They recently reported their findings in Langmuir.

“Our method will enable a bunch of new spectroscopic measurements on these interfaces, which are essentially not possible with current techniques,” said Hoffman. These spectroscopic measurements allow scientists to track individual colors of light with detail that provides insight into the fundamental structures of molecules. These techniques can also allow them to watch chemical reactions happen in real-time as materials interact.

For many situations in biology and chemistry, interactions between two things happen at the boundaries, or interfaces, where the two meet. Before a virus enters a cell, for instance, its outer shell must merge with the cell’s membrane. A more everyday example happens in unmixed salad dressing—there, oil and water molecules only interact at the boundaries between pockets of the two liquids.

“The interface is where all the action is for chemistry and biology on a molecular level,” said Jake Koralek, senior author of the paper and a staff scientist at SLAC.

Liquid interfaces, the particular focus of this study, can determine essential variables like rates of reactions or degrees of mixing, but the interfaces themselves are only a few atoms thick. That meant it had been nearly impossible to study the interfaces because of the large bulk of molecules that exist on either side of the interface between two liquids—essentially, that sum of molecules drowned out signals from the interface itself and created a lot of noise in experimental data.

Hoffman and his team reduced the noise by reducing the bulk of the liquids to only a few nanometers thick. To do so, they shot jets of water and oil out of tiny, “microfluidic” nozzles at rates of 1 to 10 meters per second and splashed them together to form a thin sheet of liquid. Then, they beamed infrared light at the sheet and studied the spectrum of light that passed through—a technique called infrared spectroscopy—to understand what was happening at the interface. Next, they hope to use SLAC’s Linac Coherent Light Source (LCLS) to perform X-ray spectroscopy, which will provide insight into the chemistry itself.

“What this work demonstrates is that we can actually make very smooth and flat interfaces that span these entire sheets of liquid, which is a perfect target for spectroscopy,” said Koralek.

For their first tests using the microfluidic nozzles, the team shot just water—no oil—to test the feasibility of spectroscopy on a flowing sheet of liquid. By using water, the team could check their results against the well-known properties of water’s interactions with light.

Still, they were unsure of how the experiment would work with multiple liquids, so for the central experiment, the team fired three jets with two for oil and one for water, and vice versa. The flows were calibrated in such a way that they met right as they exited the nozzles to fan out to form a thin sheet of liquids.

“We had originally thought that the liquids were probably separated laterally so that one side might be one fluid and one side might be the other. But in fact, when we did infrared spectroscopy, which reveals what molecules are in each portion of the sheet, we found to our surprise that in all cases, one fluid is entirely enclosed within the other fluid,” said Koralek. “It’s always a water sheet entirely surrounded by an oil sheet, or vice versa.”

The team could also clearly see an undulating pattern of rainbow colors, demonstrating that they had not created an emulsion of oil and water but rather cleanly separated layers.

“Because we see this pattern of lighter and darker colors, we know that we’re not making an emulsion, but that we’re actually making these layers, which directly contribute to the rainbow patterns in our images. The pretty pictures are a critical part of the science,” said Hoffman.

Now that they’ve established that the method works, the team has already begun steps to help other scientists incorporate microfluidic methods with multiple liquids into their own experiments. The devices researchers need to implement those methods are inexpensive and small—they can fit in the palm of your hand—and only take a couple of hours to set up in X-ray experiments and electron microscopes, making it easy for more researchers to study liquid interfaces, Koralek said. Doing so could advance research in areas such as battery electrochemistry, he said, to improve the amount of energy that can be stored and for how long—a crucial step on the path to a net-zero carbon economy.


Citation:
Shining a new light on oil-slick rainbows and other thin-layer physics (2022, December 1)