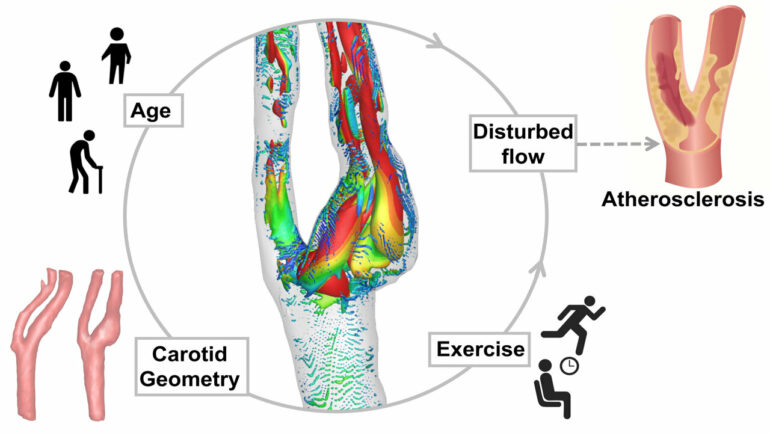 Plaque formation in the arteries carrying blood to the head and neck is a serious medical problem, potentially leading to strokes and heart attacks. In Physics of Fluids, engineers from China use fluid dynamics simulations to study the effect of exercise at various ages on plaque formation.

It has been known for years that exercise and age affect the formation of plaques through a process known as atherosclerosis. What has not been fully understood, however, is how the geometrical features of the arteries affect plaque formation, although a dilated region in the inner carotid branch, the sinus, appears to be a vulnerable site.

To study this, the authors considered two arterial geometries, one with a bulging outer artery and the other without, and modeled the effect of exercise and age on blood flow through the two model arteries.

Just above the bifurcation, the ICA bulges outward, forming a region known as a sinus that is sensitive to blood pressure changes and helps regulate blood flow and heart rate.

“Our work investigated the patterns of disturbed blood flow in two different model carotids, one with high risk geometrical factors and the other without,” co-author Xinyi He said.

To model exercise, the authors digitized blood flow measurements from individuals in three different age groups: 32-34, 54-55, and 62-63. These digitized flowrates were used as input to their computational model.

“Overall, the effects of exercise are different for different people. Particularly, we show that exercising decreases the reversed flow volume for the 62-63 age group with the low-risk carotid, which is probably related to the decrease of systolic time interval,” said Yang.

He said this suggests that evaluating the effect of exercise on atherosclerosis requires consideration of patient-specific geometries and ages.

Twisting Oreos shows creme filling sticks to one side

“For the current findings to become helpful, the analysis should be coupled to physiological and chemical processes occurring at the cellular level,” Yang said, indicating this would be the subject of the group’s future work.