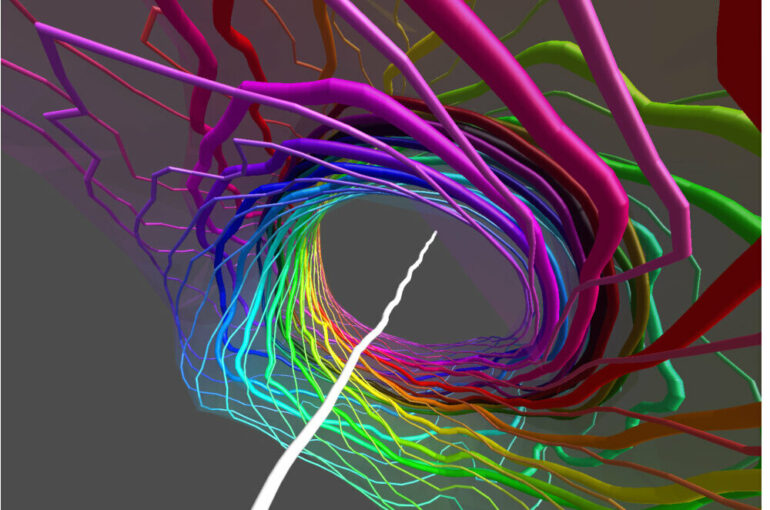 Scientists at the University of Birmingham have succeeded in creating an experimental model of an elusive kind of fundamental particle called a skyrmion in a beam of light.

The breakthrough provides physicists with a real system demonstrating the behavior of skyrmions, first proposed 60 years ago by a University of Birmingham mathematical physicist, Professor Tony Skyrme.

Skyrme’s idea used the structure of spheres in 4-dimensional space to guarantee the indivisible nature of a skyrmion particle in 3 dimensions. 3D particle-like skyrmions are theorized to tell us about the early origins of the Universe, or about the physics of exotic materials or cold atoms. However, despite being investigated for over 50 years, 3D skyrmions have been seen very rarely in experiments. The most current research into skyrmions focuses on 2D analogs, which shows promise for new technologies.

In a new study, published in Nature Communications, the international collaboration between researchers at the University of Birmingham, Lancaster, Münster (Germany) and RIKEN (Japan) has demonstrated for the first time how skyrmions can be measured in three dimensions.

Professor Mark Dennis, who led the research, said: “Skyrmions have intrigued and challenged physicists for many decades. Although we’re making good progress investigating skyrmions in 2D, we live in a 3D world. We need a system that can model a skyrmion in all its possible states in a way that could be measured. We realized that a beam of light could be harnessed for this purpose because we are able to closely control its properties, and so use it as a platform to model our skyrmions. With this approach, we can start to truly understand these objects and realize their scientific potential.”

To create their model, Dr. Danica Sugic and Professor Dennis, in the University’s School of Physics and Astronomy, cast the standard description of light, the polarization (direction the in which the light waves travel) and phase (the position of the light waves’ vibration) in terms of a sphere in 4-dimensional space, crucial to Skyrme’s original vision. This then allowed the Skyrmion field to be designed and engineered into a beam of laser light in an experiment led by Professor Cornelia Denz, University of Münster. The team used cutting-edge measurements to determine the precise structure of the skyrmion.

“These objects are actually quite intricate, from a geometric point of view,” said Dr. Sugic. “They resemble a complex system of interlocking rings, with the whole forming a particle-like structure. What’s particularly interesting is the skyrmion’s topological properties—they can be distorted, stretched or squeezed, but will not come apart. This robustness is one of the properties that scientists are most interested in exploiting.”