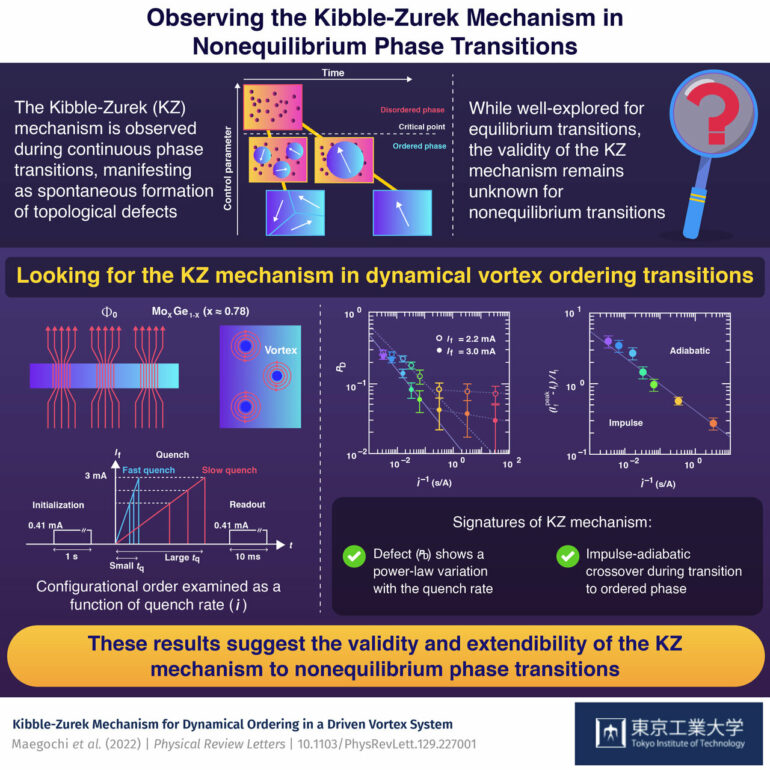 Phase transitions describe various phenomena around us, from water turning into ice to magnetic transitions to the superconducting transition where electrical resistance vanishes. In the cases of superconductivity and magnetism, the phase transition is continuous, characterized by “symmetry breaking” that leads to the formation of an ordered state.

The ordered state is perfect (defect-free) when this transition is very slow, a regime called the adiabatic limit. However, for transitions not satisfying this limit, there appear topological defects, whose generation is described by the Kibble-Zurek (KZ) mechanism. Experimentally, the KZ mechanism manifests as a power-law dependence of the defect density on the cooling rate.

Interestingly, the KZ mechanism, while widely studied for phase transitions at thermal equilibrium, has not yet been demonstrated experimentally for nonequilibrium phase transitions. However, a recent simulation study has suggested that the KZ mechanism can be applied to dynamical ordering transitions between disordered and ordered flow states, a phenomenon that can be experimentally tested in superconducting vortex systems.

To this end, a research group from the Tokyo Institute of Technology (Tokyo Tech), Japan led by Prof. Satoshi Okuma recently showed that the state of motion of a collection of magnetic fluxes (vortices) penetrating a superconductor is in the process of nonequilibrium phase transition from disordered flow to ordered lattice flow, and the lattice defects spontaneously appear in line with the KZ mechanism. Their study was published in Physical Review Letters.

In their work, the team prepared a 330-nm thick strip-shaped film of amorphous MoxGe1−x (x ≈ 0.78) on a silicon substrate and then cooled it down to enable a superconducting transition at 6.3 K. By applying a magnetic field perpendicular to the surface, the vortices were generated and experiments were performed at 4.1 K under a field strength of 3.5 T.

The team drove the vortices using a driving current that was linearly ramped up at various quench rates (dI/dt). On reaching the end-point of quench, the vortex configuration was frozen by turning off the current abruptly.

“In our study, we tested the simulation predictions by experimentally examining the configurational order of vortices after undergoing dynamical ordering as a function of the quench rate,” explains Prof. Okuma.

The team found that the vortex configuration became less ordered with increasing quench rates, signifying a phase transition. “We investigated the lattice defects appearing during this transition and their variation with the quench rate,” says Prof. Okuma.

“We found that the defect density scaled as a power law with the quench rate, consistent with the KZ scenario,” he highlights. The team additionally estimated the power law exponent (≈ 0.4-0.5), which was close to the value predicted by simulation (0.39).

“We also observed an impulse-adiabatic crossover on the ordered side of the transition, another key prediction of the KZ mechanism,” adds Prof. Okuma.