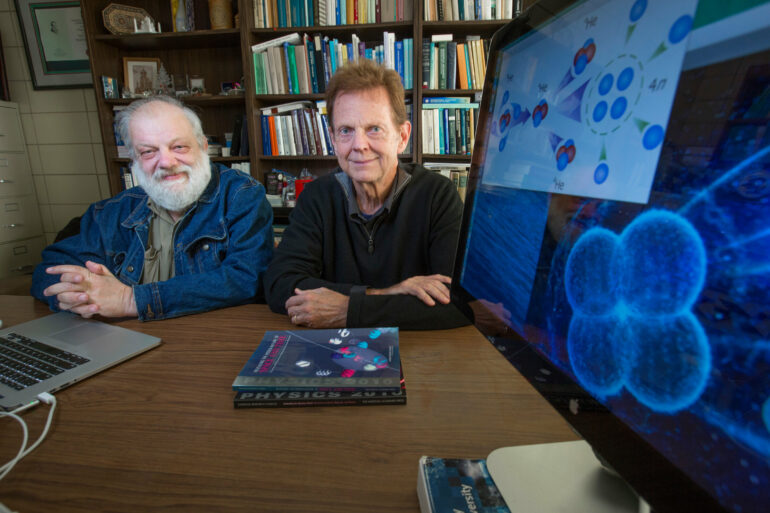 James Vary has been waiting for nuclear physics experiments to confirm the reality of a “tetraneutron” that he and his colleagues theorized, predicted and first announced during a presentation in the summer of 2014, followed by a research paper in the fall of 2016.

“Whenever we present a theory, we always have to say we’re waiting for experimental confirmation,” said Vary, an Iowa State University professor of physics and astronomy.

In the case of four neutrons (very, very) briefly bound together in a temporary quantum state or resonance, that day for Vary and an international team of theorists is now here.

The just-announced experimental discovery of a tetraneutron by an international group led by researchers from Germany’s Technical University of Darmstadt opens doors for new research and could lead to a better understanding of how the universe is put together. This new and exotic state of matter could also have properties that are useful in existing or emerging technologies.

Neutrons, you probably remember from science class, are subatomic particles with no charge that combine with positively charged protons to make up the nucleus of an atom. Individual neutrons aren’t stable and after a few minutes convert into protons. Combinations of double and triple neutrons also don’t form what physicists call a resonance, a state of matter that is temporarily stable before it decays.

Enter the tetraneutron. Using the supercomputing power at the Lawrence Berkeley National Laboratory in California, the theorists calculated that four neutrons could form a resonant state with a lifetime of just 3×10-22 seconds, less than a billionth of a billionth of a second. It’s hard to believe, but that’s long enough for physicists to study.

A just-published paper in the journal Nature reports that experiments at the Radioactive Isotope Beam Factory at the RIKEN research institute in Wako, Japan, found tetraneutron energy and width to be around 2.4 and 1.8 million electron volts respectively. These are both larger than the theory results but Vary said uncertainties in the current theoretical and experimental results could cover these differences.

“A tetraneutron has such a short life it’s a pretty big shock to the nuclear physics world that its properties can be measured before it breaks up,” Vary said. “It’s a very exotic system.”

It is, in fact, “a whole new state of matter,” he said. “It’s short-lived, but points to possibilities. What happens if you put two or three of these together? Could you get more stability?”

Experiments trying to find a tetraneutron started in 2002 when the structure was proposed in certain reactions involving one of the elements, a metal called beryllium. A team at RIKEN found hints of a tetraneutron in experimental results published in 2016.

“The tetraneutron will join the neutron as only the second chargeless element of the nuclear chart,” Vary wrote in a project summary. That “provides a valuable new platform for theories of the strong interactions between neutrons.”

Meytal Duer of the Institute for Nuclear Physics at the Technical University of Darmstadt is the corresponding author of the Nature paper, titled “Observation of a correlated free four-neutron system” and announcing the experimental confirmation of a tetraneutron. The experiment’s results are considered a five-sigma statistical signal, denoting a definitive discovery with a one in 3.5 million chance the finding is a statistical anomaly.

The theoretical prediction was published October 28, 2016, in Physical Review Letters, titled “Prediction for a Four-Neutron Resonance.” Andrey Shirokov of the Skobeltsyn Institute of Nuclear Physics at Moscow State University in Russia, who has been a visiting scientist at Iowa State, is the first author. Vary is one of the corresponding authors.

Discovery of new mechanisms to control the flow of sound

Vary’s personal reaction? “I had pretty much given up on the experiments,” he said. “I had heard nothing about this during the pandemic. This came as a big shock. Oh my God, here we are, we may actually have something new.”