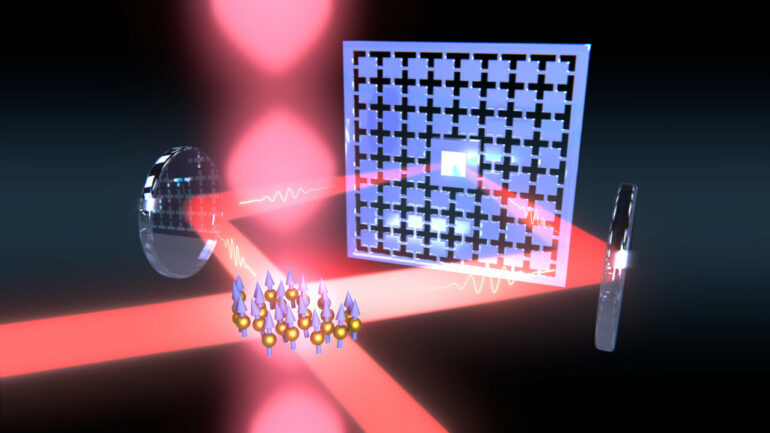 We’ve all experienced the principle of feedback—for example, when we use a thermostat in conjunction with a heating system to regulate indoor temperature. The thermostat measures the current temperature, compares it with the target value and regulates the flow of heat accordingly. Control loops of this kind appear in many areas of everyday life and technology.

They are also useful in the quantum world when it comes to bringing a system into a desired state. For example, it’s often necessary to work at very low temperatures—close to absolute zero—in order to observe the sensitive effects of the quantum world and to apply these effects to new technological applications. Classical feedback requires a measurement to be taken within a control loop and only works to a limited extent in the world of quanta, which differs from the macroscopic world we’re familiar with in many respects.

The reason for these limitations is that in quantum systems, the very act of taking a measurement causes a change in the system and therefore leads to uncontrolled backaction. With this in mind, researchers led by Professor Philipp Treutlein from the Department of Physics and the Swiss Nanoscience Institute of the University of Basel have used the principle of coherent feedback to cool a quantum system for the first time—and they have published their results in the journal Physical Review X.

Coherent feedback describes a situation in which two quantum systems interact with one another. As one of the systems acts as a control unit for the other, no measurement is needed. Instead, the control system is configured to bring the target system into a desired state by means of coherent quantum mechanical interaction.

Specifically, the researchers used atoms as a quantum mechanical control system to control the temperature of a macroscopic but very thin vibrating membrane. This process first involves aligning the intrinsic angular momentum (spin) of the atoms in a well-defined direction, which corresponds to a very cold state close to absolute zero. In contrast, the high temperature of the membrane causes it to vibrate strongly. Quantum mechanical interaction allows the atoms and membrane to swap states, causing the membrane to become cold as its energy is transferred to the atoms. Subsequently, however, the atoms can quickly be returned to their initial state using laser light in preparation for another energy transfer from the membrane.

The researchers successfully used this coherent feedback mechanism to reduce the temperature of the oscillating membrane from room temperature to 200 millikelvins (-272.95°C)—that is, a temperature close to absolute zero—within a fraction of a millisecond.

“We use the interaction between the two systems to transfer the membrane into the cold state,” explains doctoral student Gian-Luca Schmid, who is first author of the study alongside Chun Tat Ngai, another of Treutlein’s doctoral students. “The fascinating thing about these analyses is that we’re able to couple a macroscopic system to an atomic quantum system—and control it—over quite a large distance,” says Philipp Treutlein.

The relatively large distance between the two quantum systems is an important prerequisite for potential applications in quantum technology, but it also results in tiny delays. Although light travels at light speed, these delays have a clear effect on feedback and make the system more unstable. This results in slightly less cooling of the oscillating membrane than would theoretically be possible in the absence of a delay.

The researchers in Basel are studying phenomena like these at quantum interfaces between atoms and solid-state systems, because hybrid systems of this kind will play an important role in the quantum technology of the future. Potential applications include new types of sensors and quantum networks.

“We’re confident that our study will give rise to further practical investigations of coherent feedback in quantum systems,” says Treutlein.


Citation:
Using the principle of coherent feedback to cool a quantum system (2022, February 2)