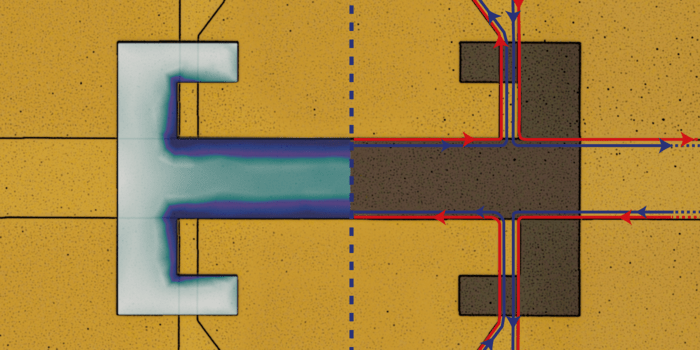 A hallmark of so-called topological quantum states is that they are protected against local perturbations. ETH physicists now demonstrate that in the paradigmatic case of the integer quantum Hall effect, vacuum fluctuations can cause a breakdown of topological protection.

“Up to 1980 nobody expected that there exists an effect like the Quantized Hall Effect, which depends exclusively on fundamental constants and is not affected by irregularities in the semiconductor like impurities or interface effects.” So spoke the German physicist Klaus von Klitzing on receiving the 1985 Nobel Prize in Physics. He was recognized for his discovery, in 1980, of a quantised version of the Hall effect in two-dimensional electron gasses. The unexpected robustness of the ‘integer quantum Hall effect’, as it has become known, in fact enabled von Klitzing’s discovery in the first place. He was working with semiconductors—materials famously plagued by imperfections—yet observed an astonishingly ‘clean’ quantization of the Hall conductivity. The fact that such quantum systems can be so well protected against local perturbations was later explained in the framework of topological properties of electronic many-body states. But that protection can break down in unexpected ways, as the group of Prof. Jérôme Faist at the Institute of Quantum Electronics now reports. Writing in Science, they present experiments in which they established that exposing a quantum Hall system to the strongly enhanced quantum vacuum fluctuations of a tight cavity provides a novel and potentially general route to substantially modify quantum states. Such ‘vacuum-field engineering’ might lead to new experimental capability—but could also cause unwanted interference in experiments combining two-dimensional materials and resonators.

That ’empty’ space is filled with electromagnetic vacuum fluctuations is one of the most captivating aspects of quantum field theories. Manifestations of vacuum fields have long been observed experimentally, for instance in the form spontaneous emission, the Lamb shift and the Casimir effect. But direct sensing of these fields was achieved only in recent years, most notably in 2019 work of the Faist group in which they determined the spectral characteristics of vacuum-field fluctuations. An intriguing questions that emerged from this line of work, in Zurich and elsewhere, was whether vacuum fields could be harnessed to modify, in a controlled manner, the properties of materials. In earlier work, a collaboration of ETH physicists has found indications of just that, when measuring magneto-transport in a semiconductor material coupled to a cavity. However, in these experiments the signatures of the modification depended on the sample itself and different physical samples had to be measured to compare situations in which the properties were modified by vacuum fields to an ‘unmodified’ scenario.

Now doctoral student Felice Appugliese and colleagues in the Faist group turned to a system in the integer quantum Hall regime, where topological protection ensures robustness and therefore removes some dependence on the specific sample used. In their experiments, they positioned Hall-bar samples into the tight confines of an optical nano-cavity, with dimensions well below the wavelength of the light involved. Such cavities mediate very strong coupling between light and matter states, thus providing a highly sensitive optical probe for quantum many-body states. Over the past decade, the team around Faist and Giacomo Scalari, now an adjunct professor in the group, have perfected such cavities (so-called split-ring cavities) to reach record-high light–matter couplings. Importantly, the tight sub-wavelength confinement also enhances vacuum-field fluctuations, enabling both tweaking out their effect on matter and providing a route to ‘vacuum-field engineering’. This was already shown in the previous work, but a solid baseline was missing.

For a direct comparison Appugliese et al. fabricated and tested a reference sample without a cavity and a sample with cavity on the same chip. In the reference sample they measured the beautiful staircase sequence of wide plateaus in resistance first seen by von Klitzing. In the sample with cavity, however, they saw unmistakeable deviations from this integer quantization (see figure above). These can be explained within a framework of their theory collaborator Cristiano Ciuti at the Université de Paris. In essence, the cavity mediates long-range dynamics in which ultimately opposite edge states are coupled, opening up a channel through which an electron can be scattered, thereby breaking the topological protection. By contrast, short-range interaction such as impurities cannot produce scattering.

Appugliese and colleagues went one step further and modified the field inside the resonator with a metallic surface, which they placed at varying distances from the sample. Not only did they demonstrate in this way vacuum-field-induced modification of the quantum Hall state without any reference sample, they also provide a hint how topological quantum many-body effects can be controllably modified. These results are also a reminder that platforms combining two-dimensional materials and resonator structures—these are increasingly used in various areas of physics—could be prone to unwanted interference effects. This warning might extend as well to situations without cavities. Quantum Hall samples serve, thanks to the exact quantization they offer, as a standard for electrical resistance (with the resistance quantum being known as the von Klitzing constant) and as a high-precision probe of fundamental constants. As free space is permeated by vacuum fluctuations, it is thinkable that these fields ultimately limit the precision of such benchmarks.

New quantum whirlpools with tetrahedral symmetries discovered in a superfluid