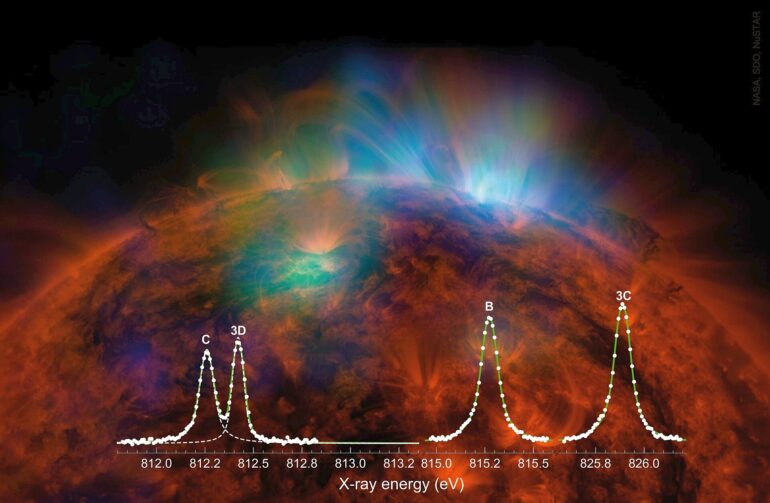 An international team led by the Heidelberg MPl for Nuclear Physics has solved a decades-long problem in astrophysics with a high-precision experiment.

The intensity ratios of important radiation lines of iron measured in the laboratory previously deviated from those calculated, and thus there was uncertainty about the states of very hot gases derived from the X-ray spectra, such as in the solar corona or the vicinity of black holes.

With the new experimental data, agreement with the theory has now been achieved. This means that X-ray data from space telescopes can be analyzed in the future with a high degree of confidence in the atomic models behind them.

Very hot gas, such as that existing in the corona of the sun or the close vicinity of black holes, emits intense X-ray radiation. It reveals which physical conditions, such as temperature and density, are present there. But for decades, researchers have been struggling with the problem of disagreement between the measured and the calculated ratios, and therefore the parameters of the gas derived from the X-ray spectra. An international team led by the Max Planck Institute for Nuclear Physics in Heidelberg has now solved the problem with an extraordinarily precise experiment.

Almost everything we know about distant stars, gas nebulae and galaxies is based on the analysis of the light we receive from them. More precisely, of the electromagnetic waves, because astronomers now have their entire spectrum at hand. The spectral range in which a solid or a gas radiates most brightly depends mainly on its temperature: the hotter, the more energetic the radiation.

In space, more than 99% of all visible matter is in the plasma state; it is so hot that the atoms have lost one or more electrons and occur in the form of positively charged ions. For example, extremely hot plasmas with temperatures of more than one million degrees are present in the solar corona visible during a total solar eclipse. Furthermore, they are found in the vicinity of black holes or as intergalactic gas between galaxies.

The X-rays emitted by such plasmas exhibit the fingerprints of the chemical elements within them. Very prominent are spectral lines (emission lines) from multiply ionized iron, in particular Fe XVII, which has lost 16 of its original 26 electrons. The reason: Iron is common among the heavy elements and Fe XVII is present over a wide temperature range.

When analyzing an X-ray spectrum, one compares not only the energies of the emission lines, but also the intensity ratios of characteristic lines. In order to be able to draw conclusions about the properties of the cosmic plasma, these intensity ratios must be well known. It is possible to do this by calculating them theoretically and verifying them experimentally in the laboratory.

And that was just the problem so far: quantum mechanical calculations and laboratory results of the intensity ratios of two strong lines called 3C and 3D deviated from each other by about 20% and called into question our understanding of atomic structure as well as the confidence in the models used.

This was not only a headache for the astronomers, but also for the physicists, because where did the error lie, in the theory or the experiment? Two years ago, the team led by doctoral student Steffen Kühn at the Max Planck Institute for Nuclear Physics (MPIK) in Heidelberg had conducted the most accurate experiment to that date, and even then an inexplicable discrepancy remained.

The MPIK theory team led by Natalia Oreshkina and Zoltan Harman, plus Marianna Safronova and Charles Cheung in the U.S. and Julian Berengut in Australia had run supercomputers at full blast to recalculate the emission lines 3C and 3D of Fe-XVII with the highest precision: The discrepancy as well as the question remained: Who was right?

“We were convinced to have all systematic effects known at that time under control,” Kühn remembers. However, in a final attempt, he and the research team led by José Crespo sought to get to the bottom of the matter: Instead of measuring the intensity ratio of the two lines, they tried to measure the absolute strength of the individual transitions, also called oscillator strength. But in order to measure these individual line strengths and identify the villain of the two lines in the theoretical observation, the quality of the measurement data had to be improved considerably.

For this tricky measurement, as part of his doctoral thesis Kühn used an Electron Beam Ion Trap apparatus (PolarX-EBIT) that had been built within the scope of a project by postdoc Sonja Bernitt at the MPIK. Inside it, iron ions are produced by an electron beam and trapped in a magnetic field. Thereby, the electron beam removes the outer electrons of the iron ions until the desired Fe XVII is present. Next, the trapped iron ions are irradiated with X-ray light of suitable energy such that they fluoresce. For this purpose, the incident energy of the X-ray photons has to be varied until the desired lines are exactly hit.

Since commercially available sources cannot produce the X-ray radiation required, the PolarX-EBIT had to be transported to DESY in Hamburg. There, the PETRA III synchrotron generates an X-ray beam whose energy can be tuned over a specific energy range. This way, the iron ions are excited to emit X-rays, which were then spectrally analyzed depending on the incident photon energy.

With clever improvements to the apparatus and the measurement scheme, Kühn and his colleagues Moto Togawa, René Steinbrügge and Chintan Shah succeeded during long days and short nights at the PETRAIII beamline in doubling the resolution of the spectra once more compared to their previous measurement and suppressing the interfering background, as it occurring in every measurement, by a factor of a thousand.

The enormously improved data quality led to the breakthrough: for the first time, the emission lines to be investigated could be completely separated from neighboring lines. Furthermore, lines 3C and 3D could now be measured right to their very edge.

“In the previous measurements, the wings of these lines were hidden in the background, leading to an erroneous interpretation of the intensities,” explains Kühn. Maurice Leutenegger from NASA Goddard Space Flight Center, who was involved in the experiment as an expert in X-ray astrophysics, is also highly satisfied with the result: “The final outcome is now in excellent agreement with the theoretical predictions. That also pleases the theorists.

“This strengthens the confidence in the quantum mechanical calculations used to analyze astrophysical spectra. This applies particularly to lines for which there are no experimental reference values,” Kühn emphasizes the significance of the new result. Moreover, the spectra of the space telescopes can now be evaluated with greater accuracy.

This also applies to two large X-ray observatories that are soon to be launched into space: The Japanese-led X-Ray Imaging Spectroscopy Mission (XRISM, launch in May 2023) and the Athena X-Ray Observatory of the European Space Agency ESA (launch in the early 2030s).

The paper is published in the journal Physical Review Letters.