Radiative cooling and solar heating from one system, no electricity needed 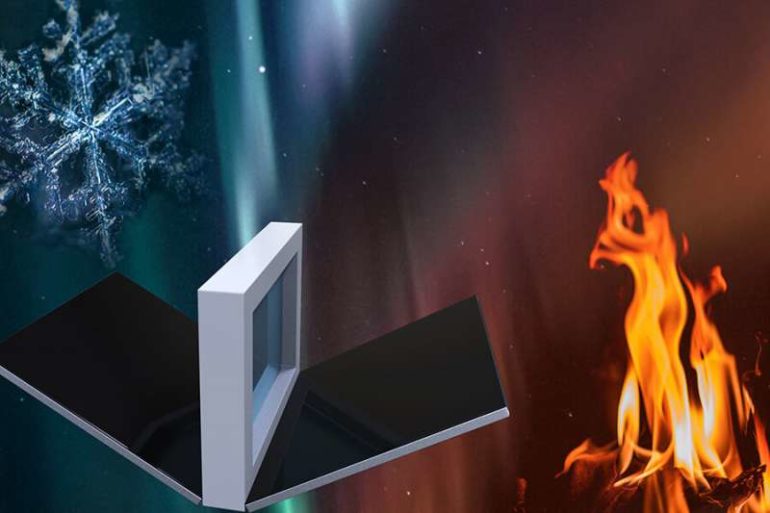 Passive cooling, like the shade a tree provides, has been around forever.

Recently, researchers have been exploring how to turbo charge a passive cooling technique—known as radiative or sky cooling—with sun-blocking, nanomaterials that emit heat away from building rooftops. While progress has been made, this eco-friendly technology isn’t commonplace because researchers have struggled to maximize the materials’ cooling capabilities.

While the system tested was only 70 centimeters (27.5 inches) squared, it could eventually be scaled up to cover rooftops, engineers say, with the goal of reducing society’s reliance on fossil fuels for cooling and heating. It also could aid communities with limited access to electricity.

“There is a great need for heating and cooling in our daily life, especially cooling in the warming world,” says the study’s lead author Qiaoqiang Gan, Ph.D., professor of electrical engineering in the UB School of Engineering and Applied Sciences.

The system consists of what are essentially two mirrors, made of 10 extremely thin layers of silver and silicon dioxide, which are placed in a V-shape.

These mirrors absorb incoming sunlight, turning solar power from visible and near-infrared waves into heat. The mirrors also reflect mid-infrared waves from an “emitter” (a vertical box in between the two mirrors), which then bounces the heat they carry into the sky.

“Since the thermal emission from both surfaces of the central thermal emitter is reflected to the sky, the local cooling power density on this emitter is doubled, resulting in a record high temperature reduction,” says Gan.

“Most radiative cooling systems scatter the solar energy, which limits the system’s cooling capabilities,” Gan says. “Even with a perfect spectral selection, the upper limit for the cooling power with an ambient temperature of 25 degrees Celsius is about 160 watts per square meter. In contrast, the solar energy of about 1000 watts per square meter on top of those systems was simply wasted.”

“One of the key innovations of our system is the ability to separate and retain the solar heating and radiative cooling at different components in a single system,” says co-first author Lyu Zhou, a Ph.D. candidate in electrical engineering in the School of Engineering and Applied Sciences. “During the night, radiative cooling is easy because we don’t have solar input, so thermal emissions just go out and we realize radiative cooling easily. But daytime cooling is a challenge because the sun is shining. In this situation, you need to find strategies to separate solar heating from the cooling area.”

The work builds upon previous research Gan’s lab led that involved creating a cone-shaped system for electricity-free cooling in crowded cities to adapt to climate change.

“The new double-sided architecture realized a record local cooling power density beyond 280 watts per square meter. Under standard atmospheric pressure with no vacuum thermal isolation, we realized a temperature reduction of 14.5 degrees Celsius below the ambient temperature in a laboratory environment, and over 12 degrees Celsius in an outdoor test using a simple experimental system,” says the other co-first author, Haomin Song, Ph.D., a research assistant professor of electrical engineering in the School of Engineering and Applied Sciences.

“Importantly, our system does not simply waste the solar input energy. Instead, the solar energy is absorbed by the solar spectral selective mirrors, and it can be used for solar water heating, which is widely used as an energy efficient device in developing countries,” says Gan. “It can retain both the solar heating and radiative cooling effects in a single system with no need of electricity. It’s really sort of a ‘magic’ system of ice and fir.”

The research team will continue to investigate ways to improve the technology, including examining how to capture enough solar power to boil water, making it suitable for drinking.

Radiative cooler that cools down even under sunlight