Scientists in Antarctica discover a vast, salty groundwater system under the ice sheet – with implications for sea level rise 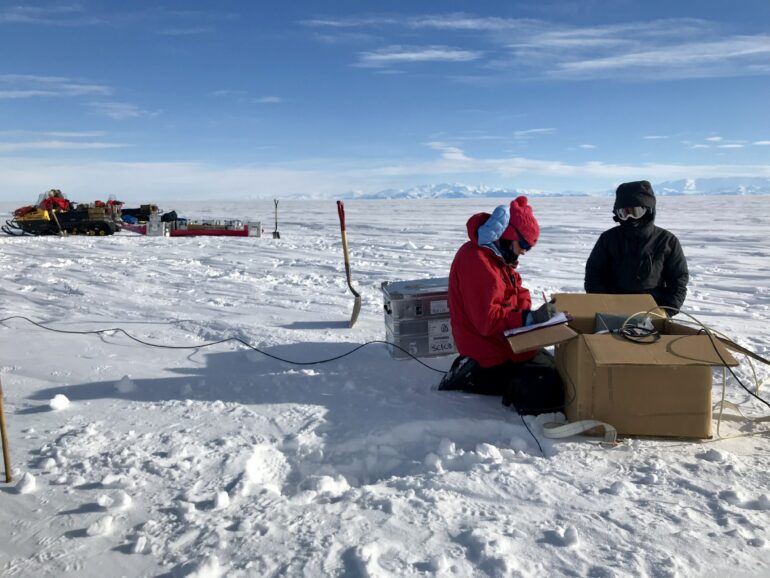 A new discovery deep beneath one of Antarctica’s rivers of ice could change scientists’ understanding of how the ice flows, with important implications for estimating future sea level rise.

Glacier scientists Matthew Siegfried from Colorado School of Mines, Chloe Gustafson from Scripps Institution of Oceanography and their colleagues spent 61 days living in tents on an Antarctic ice stream to collect data about the land under half a mile of ice beneath their feet. They explain what the team discovered and what it says about the behavior of ice sheets in a warming world.

What was the big takeaway from your research?

First, it helps to understand that West Antarctic was an ocean before it was an ice sheet. If it disappeared today, it would be an ocean again with a bunch of islands. So, we know that the bedrock below the ice sheet is covered with a thick layer of sediments – the particles that accumulate onto ocean floors.

What we didn’t know was what was in the tiny pore spaces among those sediments below the ice.

We expected to find meltwater coming from the ice stream above, a fast-moving channel of ice that flows from the center of the ice sheet toward the ocean. What we didn’t expect, but we found in this thick layer of sediments, was a huge amount of groundwater – including saltwater from the ocean.

Our findings suggest that this salty groundwater is the largest reservoir of liquid water below the ice stream we studied, and likely others, and it may be affecting how the ice flows on Antarctica.

Liquid water is incredibly important to how fast an ice stream moves. If there’s liquid water at the base of an ice stream, it flows fast. If that water freezes or the base dries out, the ice screeches to a stop.

Models of ice streams typically consider only whether ice at the base has reached the melting point or if water has flowed from upstream along the base of the ice. Scientists had never considered that more water was available under the ice sheet, let alone water that is much saltier, which keeps water from freezing at lower temperatures. (Think about why communities put salt on roads in winter.)

Bitcoin plunges by nearly $3,000 after closing in on its all-time record

This water can move through the pores in the subglacial groundwater system, just like groundwater elsewhere, but in Antarctica, there is a…