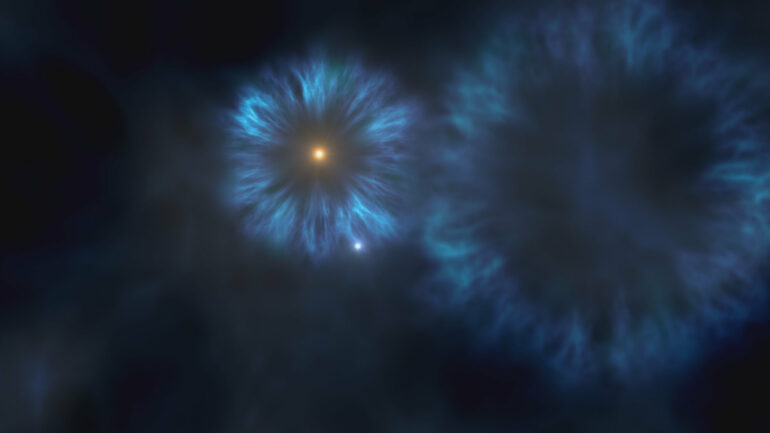 An international team of researchers, among them scientists from the Instituto de Astrofísica de Canarias (IAC), has confirmed the primitive origin of an old star in the Milky Way using the ESPRESSO instrument.

The stars with the least content of metals are considered to be the oldest in the Milky Way, formed only a few hundred million years after the Big Bang, which is a small fraction of the age of the universe. These stars are “living fossils” whose chemical composition gives clues about the first stages of the evolution of the universe.

The star SMSS1605-1443 was discovered in 2018 and identified as one of the oldest in the galaxy by its chemical composition, but its underlying nature was not known. Now, thanks to the combined efforts of several European research groups and the use of the ESPRESSO spectrograph, the origin of this jewel of stellar archaeology has been deduced. The results of this research are published today in the journal Astronomy & Astrophysics.

“It was surprising to find, thanks to ESPRESSO on the VLT, that this object is really a double star (a binary). This was thought not to occur in the majority of these very old stars,” says David Aguado, the first author on the paper, now a researcher at the University of Florence.

The research team used the ESPRESSO instrument, whose high precision has revealed the small variations in the velocity of the object, which confirms that it is a binary, but leaves open the nature of its companion. It is thought that this type of star was formed from material processed in the interior of the first, very massive, stars, and ejected in supernova explosions during the first stages of formation of the Milky Way. In consequence, these stars have low iron content but high carbon content, generated in the interiors of the first massive stars.

The high resolution of the ESPRESSO spectrograph has permitted the detailed analysis of the proportions of the isotopes of carbon, which throws new light on the origin of this object.

IAC researcher Jonay González Hernández, a co-author of the article, explains, “We found the key in the ratio of carbon-12 to carbon-13, which we measured in the atmosphere of this star. The relative proportions of these two isotopes show that the internal processes of the star have not changed its primordial composition. It is like having a pristine sample of the medium in which this star formed over ten thousand million years ago.”

“This discovery should be understood in the context of a project that started more than 10 years ago, in which we studied in detail all the stars which are known in this rare category until we have come across this marvelous finding, which gives us a better chance to understand the chemical evolution of the universe,” says Carlos Allende Prieto, an IAC researcher and a coauthor of the article.

Rafael Rebolo, the director of the IAC an another of the authors of the article, says, “The multidisciplinary team, of researchers from Spain, Italy, France, Portugal and Switzerland has shown that the ESPRESSO spectrograph is one of the best and most modern instruments for studying the formation of the first stars. We at the IAC are very proud to have participated in its construction.”

First-ever detection of gas in a circumplanetary disk


Citation:
Astronomers find the origin of one of the oldest stars in the Milky Way (2023, January 10)