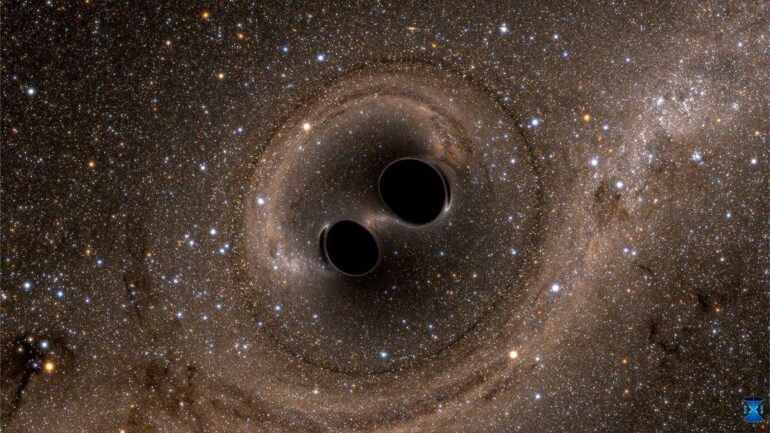 A black hole is usually where information goes to disappear—but scientists may have found a trick to use its last moments to tell us about the history of the universe.

In a new study published in Physical Review Letters, two University of Chicago astrophysicists laid out a method for how to use pairs of colliding black holes to measure how fast our universe is expanding—and thus understand how the universe evolved, what it is made out of, and where it’s going.

In particular, the scientists think the new technique, which they call a “spectral siren,” may be able to tell us about the otherwise elusive “teenage” years of the universe.

A major ongoing scientific debate is exactly how fast the universe is expanding—a number called the Hubble constant. The different methods available so far yield slightly different answers, and scientists are eager to find alternate ways to measure this rate. Checking the accuracy of this number is especially important because it affects our understanding of fundamental questions like the age, history and makeup of the universe.

The new study offers a way to make this calculation, using special detectors that pick up the cosmic echoes of black hole collisions.

Occasionally, two black holes will slam into each other—an event so powerful that it literally creates a ripple in space-time that travels across the universe. Here on Earth, the U.S. Laser Interferometer Gravitational-Wave Observatory (LIGO) and the Italian observatory Virgo can pick up those ripples, which are called gravitational waves.

Over the past few years, LIGO and Virgo have collected the readings from almost 100 pairs of black holes colliding.

The signal from each collision contains information about how massive the black holes were. But the signal has been traveling across space, and during that time the universe has expanded, which changes the properties of the signal. “For example, if you took a black hole and put it earlier in the universe, the signal would change and it would look like a bigger black hole than it really is,” explained UChicago astrophysicist Daniel Holz, one of the two authors on the paper.

If scientists can figure out a way to measure how that signal changed, they can calculate the expansion rate of the universe. The problem is calibration: How do they know how much it changed from the original?

In their new paper, Holz and first author Jose María Ezquiaga suggest that they can use our newfound knowledge about the whole population of black holes as a calibration tool. For example, current evidence suggests that most of the detected black holes have between five and 40 times the mass of our sun. “So we measure the masses of the nearby black holes and understand their features, and then we look further away and see how much those further ones appear to have shifted,” said Ezquiaga, a NASA Einstein Postdoctoral Fellow and Kavli Institute for Cosmological Physics Fellow working with Holz at UChicago. “And this gives you a measure of the expansion of the universe.”

The authors dub it the “spectral siren” method, a new approach to the ‘standard siren’ method which Holz and collaborators have been pioneering. (The name is a reference to the ‘standard candle’ methods also used in astronomy.)

The scientists are excited because in the future, as LIGO’s capabilities expand, the method may provide a unique window into the “teenage” years of the universe—about 10 billion years ago—that are hard to study with other methods.

Researchers can use the cosmic microwave background to look at the very earliest moments of the universe, and they can look around at galaxies near our own galaxy to study the universe’s more recent history. But the in-between period is harder to reach, and it’s an area of special scientific interest.

“It’s around that time that we switched from dark matter being the predominant force in the universe to dark energy taking over, and we are very interested in studying this critical transition,” said Ezquiaga.

The other advantage of this method, the authors said, is that there are fewer uncertainties created by gaps in our scientific knowledge. “By using the entire population of black holes, the method can calibrate itself, directly identifying and correcting for errors,” Holz said. The other methods used to calculate the Hubble constant rely on our current understanding of the physics of stars and galaxies, which involves a lot of complicated physics and astrophysics. This means the measurements might be thrown off quite a bit if there’s something we don’t yet know.

By contrast, this new black hole method relies almost purely on Einstein’s theory of gravity, which is well-studied and has stood up against all the ways scientists have tried to test it so far.

The more readings they have from all black holes, the more accurate this calibration will be. “We need preferably thousands of these signals, which we should have in a few years, and even more in the next decade or two,” said Holz. “At that point it would be an incredibly powerful method to learn about the universe.”


Citation:
Black hole collisions could help us measure how fast the universe is expanding (2022, August 16)