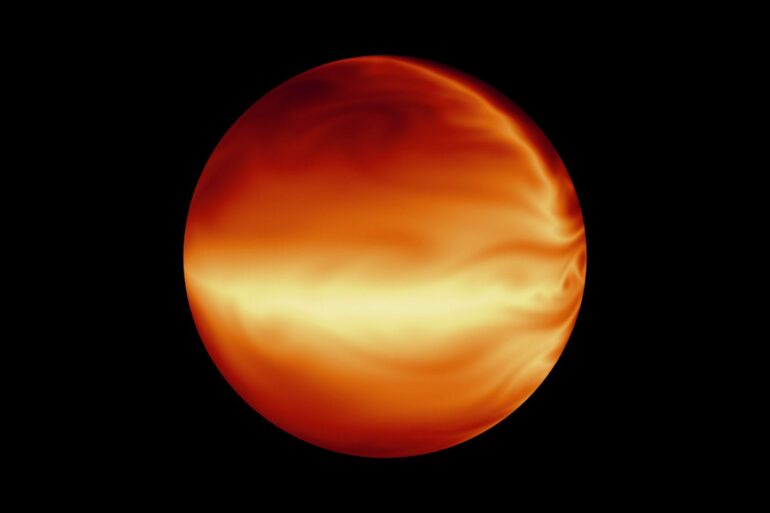 Led by the University of Bern, an international research team has discovered a sub-Neptune exoplanet orbiting a red dwarf star. The discovery was also made thanks to observations performed by the SAINT-EX observatory in Mexico. SAINT-EX is run by a consortium including the Center for Space and Habitability (CSH) at the University of Bern and the National Center of Competence in Research NCCR PlanetS.

“Red dwarfs” are small stars and thus much cooler than our Sun. Around stars like these, liquid water is possible on planets much closer to the star than in our solar system. The distance between an exoplanet and its star is a crucial factor in its detection: the closer a planet is to its host star, the higher the probability that it can be detected.

A special telescope is part of the solution

Exoplanets that are very far from our solar system cannot be observed directly with a telescope—they are too small and reflect too little light. However, one way to detect such planets is the transit method. This involves using telescopes to look for dips in the star’s brightness that occur when planets pass in front of the star. Repeated observations of the dips in the star’s brightness give precise measurements of the planet’s orbital period around the star, and the depth of the transit allows researchers to determine the planet’s diameter. When combined with planet mass estimates from other methods, such as using radial velocity measurements, the planet density can be calculated.

Planet TOI-2257 b was initially identified by data from NASA’s Transiting Exoplanet Survey Satellite TESS space telescope. The small star was observed for a total of four months, but the gaps between observations meant that it was not clear whether the decrease in brightness could be explained by the transit of a planet with an orbit of 176, 88, 59, 44 or 35 days.

Observation of the star with the Las Cumbres Observatory Global Telescope subsequently ruled out the possibility that a planet with a 59-day orbital period was causing the drop in brightness. “Next, we wanted to find out if the 35-day orbital period could be possible,” explains Nicole Schanche.

The Mexico-based SAINT-EX telescope, co-operated by the CSH and the NCCR PlanetS, is purpose-built to study red dwarfs and their planets in more detail. SAINT-EX is an acronym that stands for Search And characterIsatioN of Transiting EXoplanets. The project was named in honor of Antoine de Saint-Exupéry (Saint-Ex), the famous writer, poet and aviator. SAINT-EX observed a partial transit of TOI-2257 b and was able to confirm the exoplanet’s exact orbital period around its star, 35 days. “Another 35 days later, SAINT-EX was able to observe the entire transit, which gave us even more information about the properties of the system,” says co-author Robert Wells from the CSH, who was involved in the data processing.

A temperate planet with an irregular orbit

With its 35-day orbital period, TOI-2257 b orbits the host star at a distance where liquid water is possible on the planet, and therefore conditions favorable for the emergence of life could exist. Planets in this so-called “habitable zone” near a small red dwarf star are easier to study because they have shorter orbital periods and can therefore be observed more often. The radius of TOI-2257 b (2.2 times larger than Earth’s) suggests that the planet is rather gaseous, with high atmospheric pressure not conducive to life.

“We found that TOI-2257 b does not have a circular, concentric orbit,” explains Nicole Schanche. In fact, it is the most eccentric planet orbiting a cool star ever discovered. “In terms of potential habitability, this is bad news,” Nicole Schanche continues. “While the planet’s average temperature is comfortable, it varies from -80°C to about 100°C depending on where in its orbit the planet is, far from or close to the star.” A possible explanation for this surprising orbit is that further out in the system a giant planet is lurking and disturbing the orbit of TOI 2257 b. Further observations measuring the radial velocity of the star will help confirm the eccentricity and search for possible additional planets that could not be observed in transit.

Candidate for observation with JWST

The James Webb Space Telescope (JWST), which successfully launched on December 25, will revolutionize research into exoplanet atmospheres. In order to prioritize good candidates for observations with the JWST, a transmission spectroscopy metric (TSM) was developed that rates different system properties. TOI-2257 b is well positioned with respect to TSM and is one of the most attractive sub-Neptune targets for further observations. “In particular, the planet could be studied for signs of features such as water vapor in the atmosphere,” Nicole Schanche concludes.