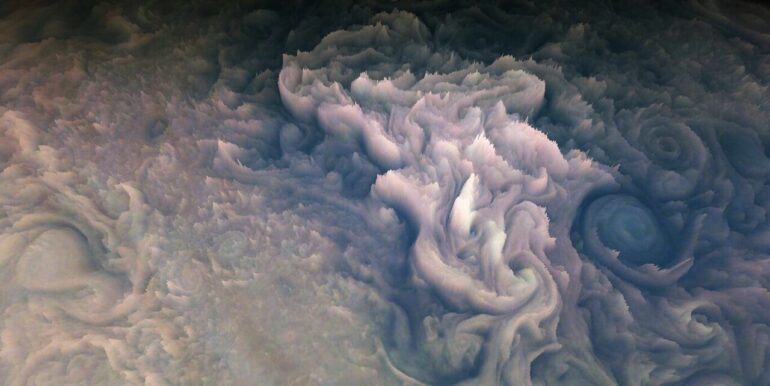 Animations of the relative heights of the cloud tops of Jupiter reveal delicately textured swirls and peaks that resemble the frosting on top of a cupcake. The results have been presented today by citizen scientist and professional mathematician and software developer, Gerald Eichstädt, at the Europlanet Science Congress (EPSC) 2022 in Granada.

The animation uses data from JunoCam, the visible-light camera onboard NASA’s Juno spacecraft, which has been orbiting Jupiter since 2016. Put on board initially to increase public engagement around the exploration of Jupiter and its moons, a worldwide team of citizen scientists, working in collaboration with professional astronomers and the Juno team, have demonstrated that JunoCam can also provide valuable science.

“The Juno mission provides us with an opportunity to observe Jupiter in a way which is essentially inaccessible by Earth-based telescopic observations. We can look at the same cloud features from very different angles within only a few minutes,” said Dr. Eichstätd. “This has opened up a new opportunity to derive 3D elevation models of Jupiter’s cloud-tops. The images of the wonderful chaotic storms on Jupiter seem to come to life, showing clouds rising at different altitudes.”

Using the different ways in which sunlight is reflected and scattered by clouds, the team has succeeded in pinpointing the elevation of the cloud-tops observed. Solar illumination is most intense for clouds in the upper atmosphere. Deeper in the atmosphere, more light is absorbed—particularly by methane—before being scattered back up to the camera by the cloud tops.

Understanding the relative heights of the spiky pillars within the swirls will help scientists to unveil in more detail the elements that compose them.

“From theoretical models, the clouds are expected to be composed of different chemical species, ammonia, ammonium hydrosulphide, and water ice from top to bottom,” added Dr. Eichstädt. “Once we calibrate our data thanks to other measurements of the same cloud tops, we will test and refine the theoretical predictions and have a better 3D picture of the chemical composition.”