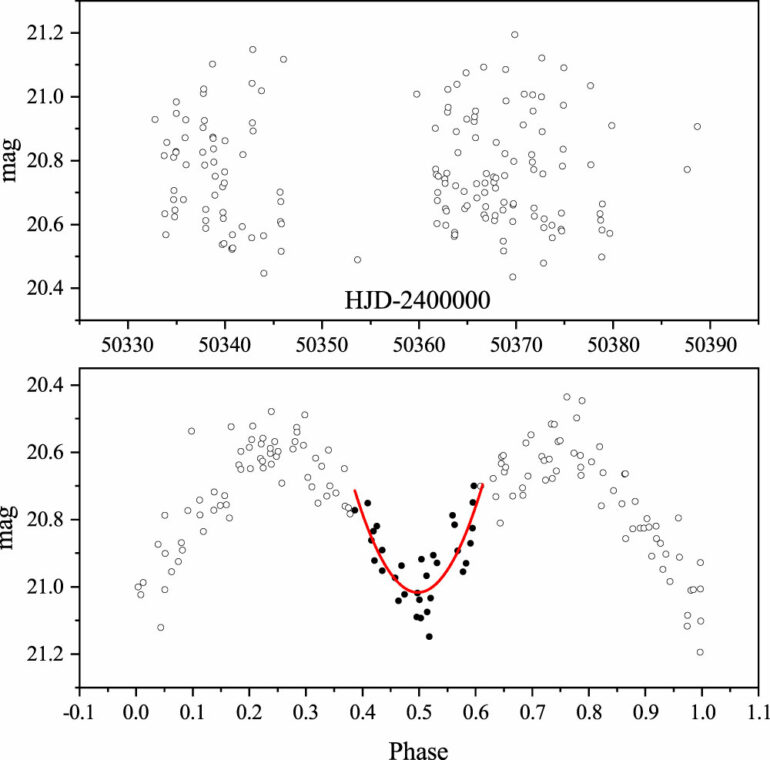 A research team led by Prof. Qian Shengbang and Ph.D. student Li Fuxing from the Yunnan Observatories of the Chinese Academy of Sciences has found that the formation and evolution of the massive binaries in the Milky Way and Andromeda Galaxy (M31) may share the same mechanism.

Their findings were published in Monthly Notices of the Royal Astronomical Society and The Astrophysical Journal.

Massive binaries contain at least an early-type star whose spectral type is O, B-type. These binaries have high-energy radiation such as X-rays, and can create neutron stars or black holes. The progenitors of these semidetached binaries are the detached binaries where the original, more massive components evolve faster and fill their critical Roche lobes first, and then transfer mass to their companions with the case A evolution.

During this process, the orbital period of the system will be decreased and the mass ratio will be increased. When the system evolves to the critical state where the mass ratio equals one (twin binaries), this binary has the shortest orbital period. Then the mass ratio of the binary will be reversed with mass transfer from the less-massive component to the more-massive one after this special stage.

In the study published in Monthly Notices of the Royal Astronomical Society, the researchers studied the evolution stage of V375 Cassiopeia (V375 Cas), a massive binary and contains two components of B-type.

They analyzed the light curves of V375 Cas and found that V375 Cas should undergo a late case A mass transfer from the less-massive component to the more-massive one.

Meanwhile, according to the statistics, those massive semidetached binaries have a third body with different periods. From the H-R diagram, the components of the massive binaries almost are the main-sequence stars, and the evolutionary age of the secondary component is larger than that of the primary for V375 Cas. “V375 Cas is a hierarchical triple system where a massive main-sequence star accompanies a massive semidetached mass-transfer binary based on the estimation of the third light,” said Li.

The researchers also discovered two massive close binaries with twin components in M31. M31 is the closest spiral galaxy to the Milky Way and the largest galaxy in the Local Group, and its structure and metallicity are very close to that of the Milky Way.

Based on the study of the orbital period changes by the O-C diagrams and configurations of binaries, the researchers found that these two massive twin binaries are at different evolutionary stages with similar mass ratios (close to unity). The twin contact binary is about to enter the critical evolutionary stage of the shortest period with rapid mass transfer. The semidetached binary has experienced that evolution stage and fails to form a contact binary during the orbit decreasing phase with case A mass transfer.

These findings were published in The Astrophysical Journal.

Russian rocket blasts off carrying Japanese billionaire to the ISS


Citation:
Formation and evolution of massive binaries may share the same mechanism in Milky Way and Andromeda galaxies (2022, June 17)