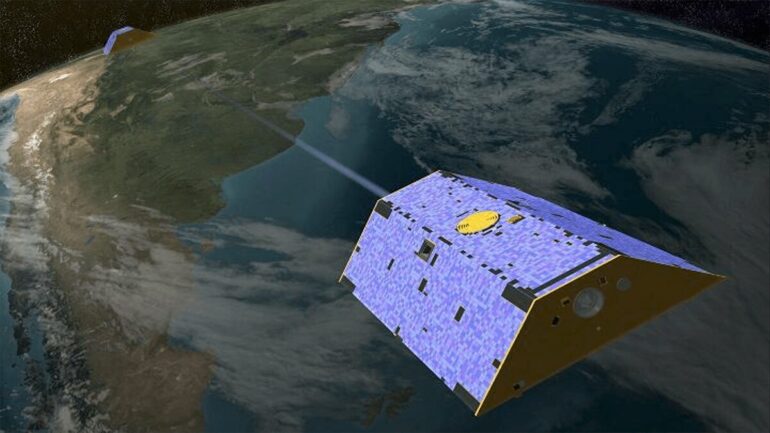 To document large-scale transformations on Earth, such as waning ice sheets and shifting coastlines, geoscientists often use views from space to track mass changes on daily to decadal timescales.

Data from NASA’s Gravity Recovery and Climate Experiment (GRACE), which operated from 2002 to 2017, has helped immensely in these efforts. For 15 years, GRACE’s twin satellites chased each other in orbit around the planet, separated by 200 kilometers. Their mission was to measure changes in Earth’s gravitational pull that directly relate to shifting masses of land, water, and ice at the surface. GRACE also measured changes related to mantle processes and deformation caused by very large earthquakes.

While the satellites orbited the planet, however, one issue kept cropping up in the data: Scientists discovered a north–south striped error pattern in estimates of the planet’s gravity field. This was particularly problematic in polar regions, where ice sheets are losing mass.

Different filtering techniques have been used to mitigate the stripes in data, but these methods can result in unwanted land signal “leakage” into ocean regions. An example of this effect was observed around Greenland’s ice sheet—a regular approach using gridded mascons (mass concentration elements) to study data from 2016 indicated roughly 5% less mass loss compared with an approach using mascons that followed the coastlines.

Two new papers, by Allgeyer et al. and Tregoning et al., present an updated method for processing GRACE data. Allgeyer and colleagues point out that traditionally, changes in gravity were measured using the rate of distance change between the two satellites (range rate). Instead, the team used the rate of change of range rate (range acceleration) between the satellites. They found that this method reduced the north–south striped error pattern seen with prior approaches.

In addition to using range accelerations, Tregoning and colleagues created an irregular-shaped patchwork of mascons that follow the coastline to study ice sheet mass change around Greenland instead of the regular gridded pattern. Using this method, the team significantly reduced signal leakage in gravity estimates.

The updated techniques for processing GRACE data will reduce the striping seen in previous observations and lessen the smoothing effect of land surface calculations within a grid. The researchers note that these changes are especially important along coastlines, ice sheets, and major drainage basins, and will offer researchers clearer pictures of how Earth’s landscape changes over time.


This story is republished courtesy of Eos, hosted by the American Geophysical Union. Read the original storyhere.