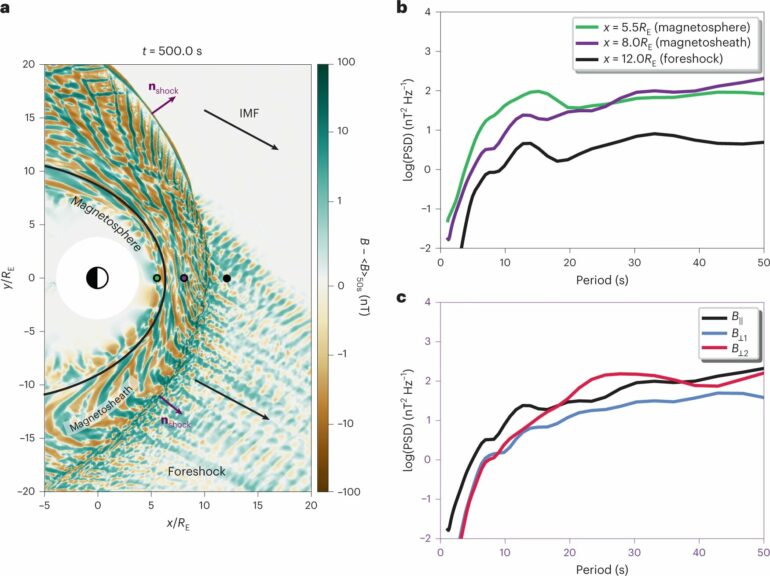 Shock waves occur in air when a plane travels faster than the speed of sound and also occur in plasma (a fourth state of matter that makes up 99% of the visible universe) in space. Shock waves are believed to accelerate particles in supernovae (the explosions of stars) and in the jets released far into space by black holes.

For the new study, published in Nature Physics, the international research team looked at magnetic waves that occur ahead of the Earth’s shock (bow shock) known as foreshock waves. These are created by particles bouncing off the shock and traveling back towards the sun.

They used a computer model, Vlasiator, to simulate the physical processes at play in the transmission of these waves, finding waves on the other side of the shock with almost identical properties as in the foreshock. They then confirmed the presence of these waves using observational data from NASA’s Magnetospheric Multiscale (MMS) mission.

Co-author Dr. Daniel Verscharen (UCL Mullard Space Science Laboratory), who has world-leading expertise in analyzing plasma waves and whose code was used to interpret the MMS data, said, “Shock waves in plasma are much more difficult to understand than when they occur in air. There is a lot of space between the particles and collisions between them are rare.”

“However, it is a universal process occurring throughout the universe. We cannot send a spacecraft to a supernova—so we are lucky to be able to study plasma shock waves in our own cosmic neighborhood.”

However, several major obstacles lie in their way: first the waves must cross the shock, which slows down the solar wind before it would hit the Earth’s magnetic field at supersonic speeds, then traverse a turbulent region of space (magnetosheath), before finally entering Earth’s magnetosphere.

Lead author Dr. Lucile Turc, of the University of Helsinki, said, “At first, we thought that the initial theory proposed in the 1970s was correct: the waves could cross the shock unchanged. But there was an inconsistency in the wave properties that this theory could not reconcile, so we investigated further.

“Eventually, it became clear that things were much more complicated than it seemed. The waves we saw behind the shock were not the same as those in the foreshock, but new waves created at the shock by the periodic impact of foreshock waves.”

The numerical model also pinpointed that these waves could only be detected in a narrow region behind the shock, and that they could easily be hidden by the turbulence in this region. This likely explains why they had not been observed before.

While the waves originating from the foreshock only play a limited role in space weather at Earth, they are of great importance to understand the fundamental physics of our universe.