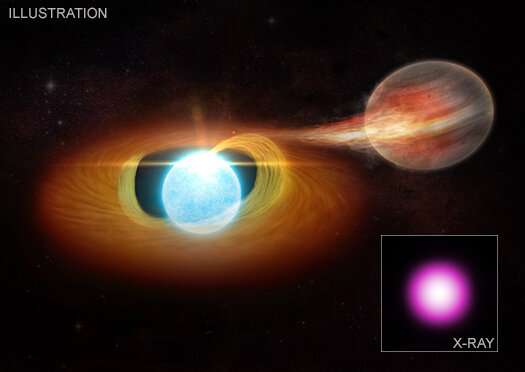 An exhausted star still has some punches to deliver. Astronomers have found that a white dwarf is pummeling a companion object—either a lightweight star or a planet—with incessant blasts of heat and radiation plus a relentless gravitational pull tearing it apart.

Most stars, including the Sun, will become “white dwarfs” after they begin to run out of fuel, expand and cool into a red giant, and then lose their outer layers. This evolution leaves behind a stellar nub that slowly fades for billions of years.

A team of scientists used NASA’s Chandra X-ray Observatory and ESA’s XMM-Newton to investigate some unusual X-ray activity in three white dwarf stars. Typically, white dwarfs give off low-energy X-rays, which researchers saw in their sample. However, these white dwarfs also had surprisingly bright X-ray emission at higher energies.

One of the white dwarfs stood out among this group. The white dwarf KPD 0005+5106 had high-energy X-ray emission that was regularly increasing and decreasing in brightness every 4.7 hours. This recurring ebb and flow of X-rays indicates that KPD 0005+5106 has an object in orbit around it—either a very low-mass star or a planet.

Material from the low-mass star or planet could be slamming into the north and south poles of the white dwarf, creating a bright spot of high-energy X-ray emission. As the white dwarf and its companion orbit around each other this hot spot would go in and out of view, causing the high-energy X-rays to regularly increase and decrease.

“We didn’t know this white dwarf had a companion before we saw the X-ray data,” said You-Hua Chu of the Institute of Astronomy and Astrophysics, Academia Sinica (ASIAA) in Taiwan, who led the study. “We’ve looked for the companion with optical light telescopes but haven’t seen anything, which means it is a very dim star, a brown dwarf, or a planet.”

“This companion object is about 500,000 miles away from the white dwarf, only about one thirtieth of the distance from Mercury to the Sun,” said co-author Jesús Toala of the National Autonomous University of Mexico. “Whatever this object is, it’s getting blasted with heat.”

The researchers looked at what would happen if this object was a planet with the mass about that of Jupiter, a possibility that agrees with the data more readily than a dim star or a brown dwarf. In their models, the white dwarf would pull material from the planet onto the white dwarf, a process that the planet could only survive for a few hundred million years before eventually being destroyed. This stolen material swirls around the white dwarf, which glows in X-rays that Chandra can detect.

“This is a slow demise for this object that’s basically being ripped apart by constant gravitational forces,” said Martín A. Guerrero, a co-author from The Institute of Astrophysics of Andalusia in Spain. “It would be a very unpleasant place to be.”

The two other white dwarfs were also thought to be solitary objects, but they show similar energetic X-ray emission to KPD 0005+5106. By analogy, this suggests they may also have faint companions, possibly planets.

Microlensing work—which involves looking for the magnification and bending of light from distant sources around intervening objects—led by Joshua Blackman from the University of Tasmania in Australia has recently shown that a planet can survive the evolution of a white dwarf through its red giant phase. However, the distance between the white dwarf and its planet in that case is much larger than in the one seen by Chu and her team, by a factor of almost 500.

NASA seeks ideas for a nuclear reactor on the moon

Scientists will likely need to do more theoretical modeling of the evolution of double stars to understand how the planet or low-mass star might end up so close to the white dwarf.

A paper describing these results appeared in The Astrophysical Journal.