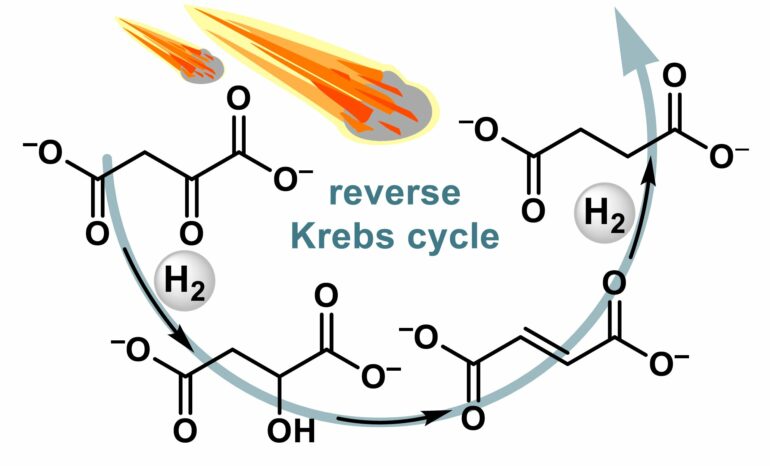 Researchers from the University of Strasbourg have demonstrated that hydrogen gas and simple metals or meteorites cause parts of the reverse Krebs cycle to occur without enzymes. Some version of this metabolic pathway is thought to date back to life’s origin. The results of this study support the hypothesis that naturally occurring metals acted as catalysts for the first protometabolic reactions.

The study was published in the journal Angewandte Chemie International Edition.

The first forms of life probably emerged over 4 billion years ago, but the exact mechanism remains unclear. Working under a hypothesis known as “metabolism-first”, researchers are gathering experimental evidence that metabolic networks—interconnected sequences of chemical reactions that build and break down life’s molecules and transfer energy—emerged spontaneously from geochemistry.

In turn, these networks, whose subunits are called metabolic pathways, gave rise to more complex structures such as genetic molecules and enzymes. In biochemistry as we know it today, each metabolic reaction is catalyzed by a highly complex enzyme and many enzymes are needed for even a single pathway. This leads to the question: which came first, enzymes or metabolism? To solve this conundrum, metals and minerals available on the early Earth could have catalyzed the first self-organized reaction networks—no enzymes required.

In this context, the focus of research is on ancient metabolic networks that were probably present in the earliest life, such the reverse Krebs cycle. This pathway, or parts of it, is used by many organisms, fixing CO2 to built-up organic molecules. It is a metabolic hub since five of its eleven chemical intermediates branch into other metabolic pathways to build lipids, amino acids, sugars, nucleotides, or cofactors.

Researchers at the Institut de Science et d’Ingénierie Supramoléculaires of the CNRS and the University of Strasbourg have shown that simple metals such as nickel, rhodium, or even meteorites, processed into a powder, are able to catalyze three consecutive steps of the reverse Krebs cycle converting oxaloacetate to succinate.

“The reactions are powered by hydrogen gas, which is produced by two natural processes, known as serpentinization and water radiolysis. Hydrogen is still used today by many bacteria to drive their metabolism,” says Sophia Rauscher, the first author who led the study. The reactions occur under 1-10 bar of hydrogen at neutral pH and ambient temperature without enzymes.

As part of the study, iron meteorites were used as catalysts. Meteorites impacted the Earth since its formation and delivered extra-terrestrial material that is in parts as old as the solar system itself. They therefore represent rare authentic geological samples from the time when life, and metabolism, first started.

“Some of these meteorites are up to 30% nickel by mass. They’re also rich in platinum group metals that are common catalysts in chemical industry, such as iridium, rhodium, platinum and palladium,” says Joseph Moran, a professor at the University of Strasbourg and the senior author who supervised the study.

The observation that metabolic reactions can be catalyzed by meteoritic material under plausible prebiotic conditions strengthens the hypothesis that metal catalysts could have initiated the first self-organized reaction networks.

At first, the networks might not have been widespread on the early Earth but could have initiated on localized, possibly microscopic environments where the needed metals were enriched. In the future, the researchers are looking to see whether meteorites or metals could help more complex reaction networks to emerge.

Provided by
University of Strasbourg


Citation:
Meteorites and simple metals as catalysts for metabolic pathways at the origin of life (2022, October 21)