Psyche, the iron giant of asteroids, may be less iron than researchers thought 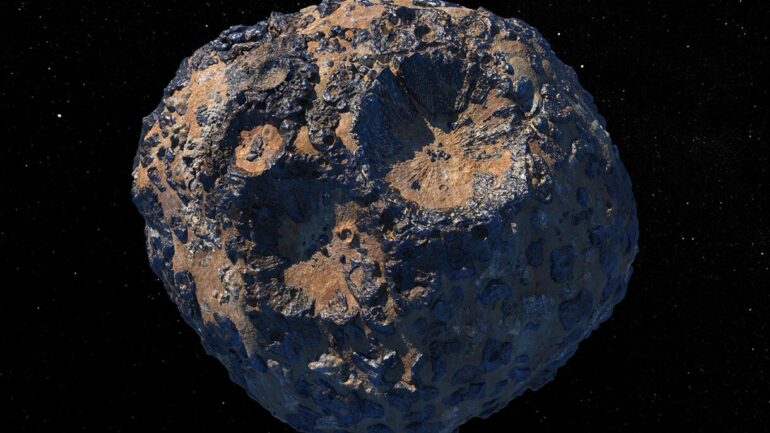 The asteroid 16 Psyche, which NASA intends to visit with a spacecraft in 2026, may be less heavy metal and more hard rock than scientists have surmised, according to a new study by researchers from Brown and Purdue universities.

Psyche, which orbits the sun in the asteroid belt between Mars and Jupiter, is the largest of the M-type asteroids, which are composed chiefly of iron and nickel as opposed to the silicate rocks that make up most other asteroids. But when viewed from Earth, Psyche sends mixed signals about its composition.

The light it reflects tells scientists that the surface is indeed mostly metal. That has led to conjecture that Psyche may be the exposed iron core of a primordial planetary body—one whose rocky crust and mantle were blasted away by an ancient collision. However, measurements of Psyche’s mass and density tell a different story. The way its gravity tugs on neighboring bodies suggests that Psyche is far less dense than a giant hunk of iron should be. So if Psyche is indeed all metal, it would have to be highly porous—a bit like a giant ball of steel wool with nearly equal parts void space and solid metal.

“What we wanted to do with this study was see whether it was possible for an iron body the size of Psyche to maintain that near-50% porosity,” said Fiona Nichols-Fleming, a Ph.D. student at Brown and study’s lead author. “We found that it’s very unlikely.”

For the study, published in Journal of Geophysical Research: Planets, Nichols-Fleming worked with Alex Evans, an assistant professor at Brown, and Purdue professors Brandon Johnson and Michael Sori. The team created a computer model, based on known thermal properties of metallic iron, to estimate how the porosity of a large iron body would evolve over time.

The model shows that to remain highly porous, Psyche’s internal temperature would have to cool below 800 Kelvin very shortly after its formation. At temperatures above that, iron would have been so malleable that Psyche’s own gravity would have collapsed most of the pore space within its bulk. Based on what is known about conditions in the early solar system, the researchers say, it’s extremely unlikely that a body of Psyche’s size—about 140 miles in diameter—could have cooled so quickly.

In addition, any event that may have added porosity to Psyche after its formation—a massive impact, for example—would likely have also heated Psyche back up above 800 K. So any newly introduced porosity would have been unlikely to last.

Taken together, the results suggest that Psyche probably isn’t a porous, all-iron body, the researchers conclude. More likely, it’s harboring a hidden rocky component that drives its density down. But if Psyche does have a rocky component, why does its surface look so metallic when viewed from Earth? There are few possible explanations, the researchers say.

One of those possibilities is ferrovolcanism—iron-spewing volcanoes. It’s possible, the researchers say, that Psyche is actually a differentiated body with a rocky mantle and an iron core. But widespread ferrovolcanic activity may have brought large amounts of Psyche’s core up to the surface, putting an iron coating atop its rocky mantle. Prior research by Johnson and Evans has shown that ferrovolcanism is possible on a body like Psyche.

Whatever the case, scientists will soon get a much clearer picture of this mysterious asteroid. Later this year, NASA plans to launch a spacecraft that will rendezvous with Psyche after a four-year journey to the asteroid belt.

Say hello to Sagittarius A*, the black hole at the center of the Milky Way galaxy

“The mission is exciting because Psyche is such a bizarre and mysterious thing,” Nichols-Fleming said. “So anything the mission finds will be really important new data points for the solar system.”


Citation:
Psyche, the iron giant of asteroids, may be less iron than researchers thought (2022, February 15)