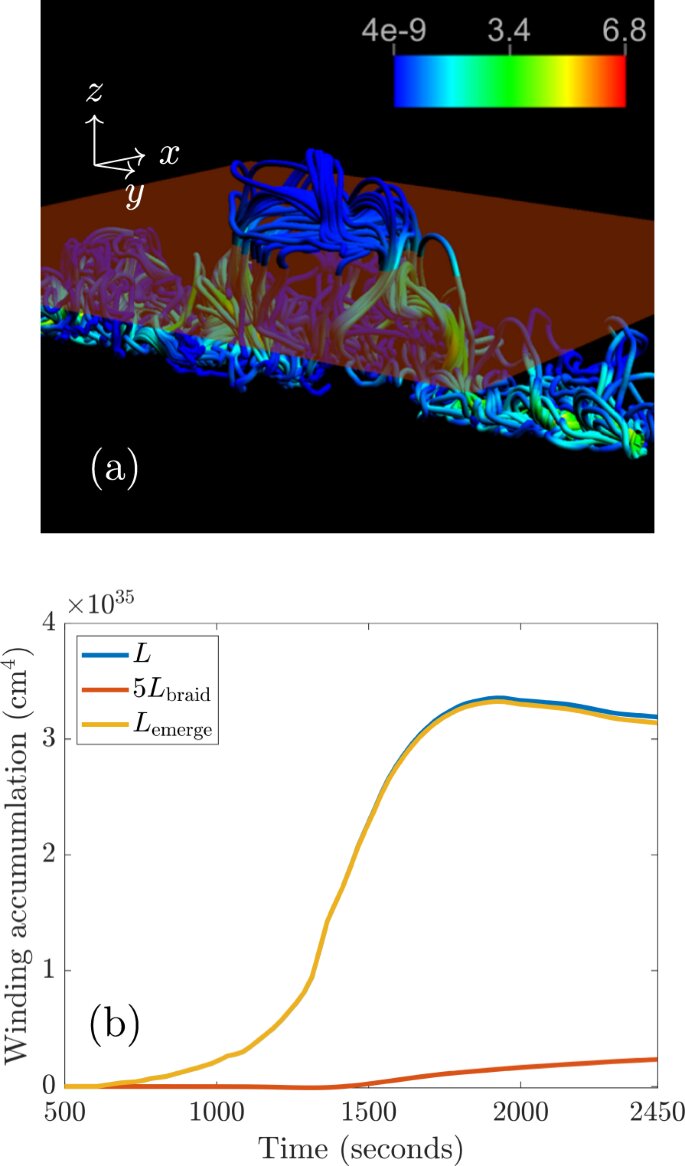 New research into the powerful magnetic fields which form inside the sun and cause violent eruptions could help predict solar flares.

Mathematicians and astrophysicists from the UK and Italy have comprehensively modeled the emergence of twisted magnetic fields into the solar atmosphere, and verified their models through observations—a breakthrough in scientific understanding of the process by which solar flares occur.

They describe their process and findings in a new paper published today in the journal Nature Communications.

Their work could provide a key piece to help solve a puzzle which solar astronomers have been aiming to solve for decades—what is the origin of magnetic twist in the solar atmosphere?

The answer could help to develop a better understanding of the space weather caused by radiation ejected from the surface of the sun during periods of solar activity.

The most violent eruptions in the solar system are born in solar active regions, which are concentrations of highly complex, twisted magnetic fields that emerge from inside the sun and into its atmosphere.

These properties are important precursors for the onset of flares and coronal mass ejections, and could form a kind of early warning system for these events once they are fully understood.

Dr. David MacTaggart, of the University of Glasgow’s School of Mathematics & Statistics, is the paper’s lead author. Dr. MacTaggart said: “A long-held assumption, adopted by many solar physicists, is that active regions in the sun are formed by these large, twisted tubes of magnetic field.

“That assumption was underpinned by a lot of research which suggested it was accurate, but there were a number of alternative possibilities which couldn’t be discounted.

Dr. MacTaggart and his collaborators at Durham University in the UK and the INAF-Osservatorio Astrofisico di Catania in Italy have shown that by using a particular and direct measure of magnetic topology, called magnetic winding, evidence for the creation of active regions by emerging tubes of twisted magnetic field can be found.

Magnetic winding was first studied in simulations of twisted magnetic flux tubes emerging into the solar atmosphere. To reach the atmosphere, the tubes need to pass through a turbulent convection zone, which deforms the emerging magnetic field significantly. Although other signatures are strongly affected by the effects of convection, magnetic winding was shown to be robust and provide a consistent signature for twisted tube emergence across a range of magnetic field parameters.

Dr. MacTaggart added: “Together with existing signatures, magnetic winding is the last piece in the puzzle to confirm that the twisted nature of active region magnetic fields emerges into the solar atmosphere, rather than being principally created there. This result has important consequences for our understanding of active region evolution and reveals magnetic winding as a new and important tool for solar magnetic field analysis.”