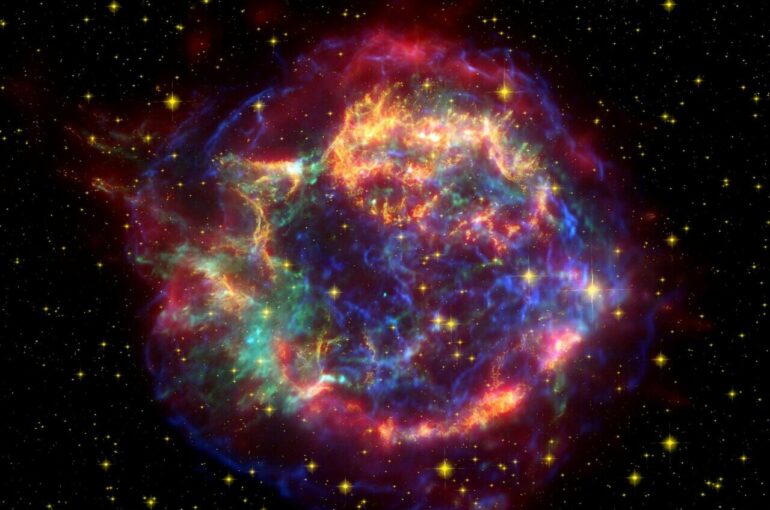 A Northwestern University astrophysics team is aiming for the stars—well, a dead star, that is.

On Aug. 21, the NASA-funded team will launch its “Micro-X” rocket from White Sands Missile Range in southern New Mexico. The rocket will spend 15 minutes in space—just enough time to snap a quick image of supernova remnant Cassiopeia A, a star in the Cassiopeia constellation that exploded approximately 11,000 light-years away from Earth. Then, the rocket will parachute back to Earth, landing in the desert—about 45 miles from the launchpad—where the Northwestern team will recover its payload.

Short for “high-resolution microcalorimeter X-ray imaging rocket,” the Micro-X rocket will carry a superconductor-based X-ray imaging spectrometer that is capable of measuring the energy of each incoming X-ray from astronomical sources with unprecedented accuracy.

“The supernova remnant is so hot that most of the light it emits is not in the visible range,” said Northwestern’s Enectali Figueroa-Feliciano, who leads the project. “We have to use X-ray imaging, which isn’t possible from Earth because our atmosphere absorbs X-rays. That’s why we have to go into space. It’s like if you jumped into the air, snapped a photo just as your head peeked above the atmosphere and then landed back down.”

Figueroa-Feliciano is a professor of physics and astronomy in the Weinberg College of Arts and Sciences and a member of Northwestern’s Center for Interdisciplinary Exploration and Research in Astrophysics (CIERA). He advised a team of seven graduate students, postdoctoral fellows and post-baccalaureate researchers, who spent the past decade building and testing the rocket.

Although Micro-X will launch from New Mexico, the team built the rocket and its payload in Figueroa-Feliciano’s laboratory on the Evanston campus. The trickiest part is keeping the super-conducting detectors at extremely cold temperatures—just a tiny fraction of a degree above absolute zero—even as it heats up while breaking through the atmosphere. The team solved that issue with a thermos filled with liquid helium, which is decoupled from the heat and vibrations on the rocket skin during flight.

“Constructing the Micro-X rocket is a challenging endeavor,” Figueroa-Feliciano said. “Once it launches, it needs to be a completely hands-off process. It has to turn on, record data, store data and send data back to us autonomously. It gives the students an opportunity to learn how to build and test real technology.”

Now in New Mexico, the team is assembling the rocket and readying it for flight. People can follow the team’s journey on Instagram.

The team previously tested the six-story-tall rocket at NASA’s Wallops Flight Facility in Virginia and launched it for the first time in summer 2018. During the rocket’s first flight, the researchers demonstrated its detectors, along with their superconducting electronics readout, worked in space.

By studying the supernova remnant, which is 10 light-years across, Figueroa-Feliciano hopes to learn more about life on Earth—and inside our bodies.

“We’re all made of star stuff,” he said. “The elements in our bodies are made in the cores of stars. When stars explode, they shoot ejecta into space. Cassiopeia A is so big that the sun and the 14 closest stars to the sun would all fit inside the supernova remnant. The ejecta from these events spreads through the galaxy and ultimately ends up making planets like Earth.”