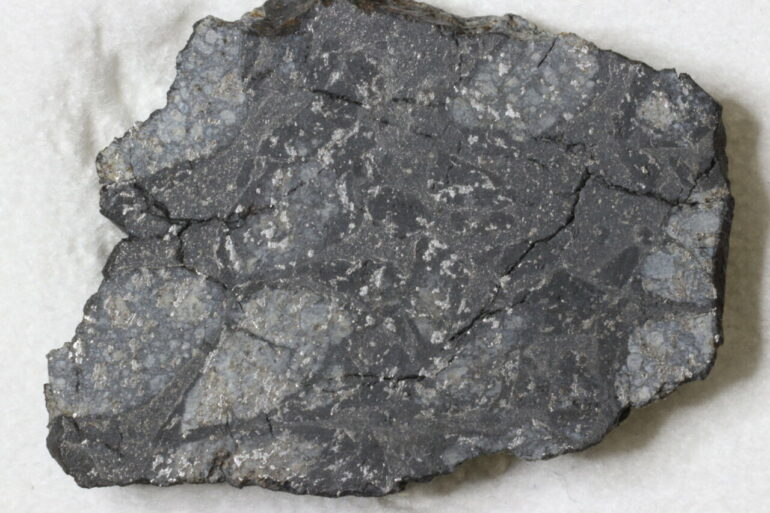 When the Chelyabinsk fireball exploded across Russian skies in 2013, it littered Earth with a relatively uncommon type of meteorite. What makes the Chelyabinsk meteorites and others like them special is their dark veins, created by a process called shock darkening. Yet, planetary scientists have been unable to pinpoint a nearby asteroid source of these kinds of meteorites—until now.

In a new paper published in The Planetary Science Journal, University of Arizona scientists identified an asteroid named 1998 OR2 as one potential source of shock-darkened meteorites. The near-Earth asteroid is about 1.5 miles wide and made a close approach to Earth in April 2020. When pieces of asteroids break off into space and then land on Earth, they are considered meteorites.

“Shock darkening is an alteration process caused when something impacts a planetary body hard enough that the temperatures partially or fully melt those rocks and alter their appearance both to the human eye and in our data,” said lead study author Adam Battle, a UArizona graduate student studying planetary science. “This process has been seen in meteorites many times but has only been seen on asteroids in one or two cases way out in the main asteroid belt, which is found between Mars and Jupiter.”

Battle’s adviser and study co-author Vishnu Reddy, a planetary sciences professor, discovered shock darkening on main belt asteroids in 2013 and 2014. Reddy co-leads the Space Domain Awareness lab at the Lunar and Planetary Laboratory with engineering professor Roberto Furfaro. Battle has worked in the lab since 2019.

“Impacts are very common in asteroids and any solid body in the solar system because we see impact craters on these objects from spacecraft images. But impact melt and shock-darkening effects on meteorites derived from these bodies are rare. Finding a near-Earth asteroid dominated by this process has implications for impact hazard assessment,” Reddy said.

“Adam’s work has shown that ordinary chondrite asteroids can appear as carbonaceous in our classification tools if they are affected by shock darkening. These two materials have different physical strengths, which is important when trying to deflect a hazardous asteroid.”

For this study, Battle, Reddy and their team used the RAPTORS system, a telescope atop the Kuiper Space Sciences building on campus, to collect data on 1998 OR2’s surface composition and determined that it looked like an ordinary chondrite asteroid. Chondrite asteroids contain the minerals olivine and pyroxene and are lighter in appearance.

But when the team ran the data through a classification tool, it suggested the asteroid was instead a carbonaceous asteroid, a type of asteroid that is characteristically dark and relatively featureless.

“The mismatch was one of the early things that got the project going to investigate potential causes for the discrepancy,” Battle said. “The asteroid is not a mixture of ordinary chondrite and carbonaceous asteroids, but rather it is definitely an ordinary chondrite, based on its minerology, which has been altered—likely through the shock darkening process—to look like a carbonaceous asteroid to the classification tool.”

Shock darkening was hypothesized in the late 1980s but didn’t gain traction and went unstudied until 2013 when the fireball over Russia produced meteorites with shock-darkened characteristics.

Scientists, including Reddy, started getting more interested in shock darkening, and Reddy soon discovered shock-darkened asteroids in the main asteroid belt. On Earth, 2%, or roughly 1,400 of about 60,000 ordinary chondrite meteorites have undergone some degree of shock or impact process, Battle said.

Researchers were able to rule out a lot of other potential reasons 1998 OR2 appeared to be a carbonaceous asteroid rather than an ordinary chondrite. One possible cause for the discrepancy could be space weathering, in which exposure to the space environment causes changes to the asteroid surface, but if that were the case, the asteroid would appear to be slightly redder in color than it is. Shock darkening is a process that can suppress the appearance of olivine and pyroxene while also darkening the asteroid’s surface to look like a carbonaceous asteroid.