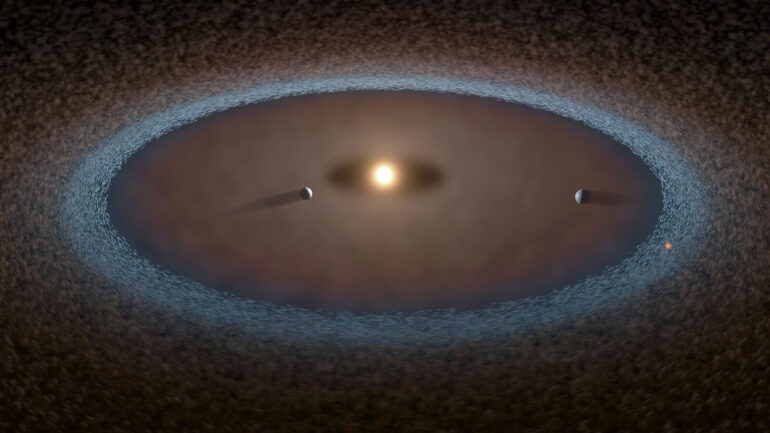 A new theory for how rocky planets form could explain the origin of so-called “super-Earths”—a class of exoplanets a few times more massive than Earth that are the most abundant type of planet in the galaxy.

Further, it could explain why super-Earths within a single planetary system often wind up looking strangely similar in size, as though each system were only capable of producing a single kind of planet.

“As our observations of exoplanets have grown over the past decade, it has become clear that the standard theory of planet formation needs to be revised, starting with the fundamentals. We need a theory that can simultaneously explain the formation of the terrestrial planets in our solar system as well as the origins of self-similar systems of super-Earths, many of which appear rocky in composition,” says Caltech professor of planetary science Konstantin Batygin, who collaborated with Alessandro Morbidelli of the Observatoire de la Côte d’Azur in France on the new theory. A paper explaining their work was published by Nature Astronomy on Jan. 12.

Planetary systems begin their lifecycles as large spinning disks of gas and dust that consolidate over the course of a few million years or so. Most of the gas accretes into the star at the center of the system, while solid material slowly coalesces into asteroids, comets, planets, and moons.

In our solar system, there are two distinct types of planets: the smaller rocky inner planets closest to the sun and the outer larger water- and hydrogen-rich gas giants that are farther from the sun. In an earlier study published in Nature Astronomy at the end of 2021, this dichotomy led Morbidelli, Batygin, and colleagues to suggest that planet formation in our solar system occurred in two distinct rings in the protoplanetary disk: an inner one where the small rocky planets formed and an outer one for the more massive icy planets (two of which—Jupiter and Saturn—later grew into gas giants).

Super-Earths, as the name suggests, are more massive than the Earth. Some even have hydrogen atmospheres, which makes them appear almost gas giant-like. Moreover, they are often found orbiting close to their stars, suggesting that they migrated to their current location from more distant orbits.

“A few years ago we built a model where super-Earths formed in the icy part of the protoplanetary disk and migrated all the way to the inner edge of the disk, near the star,” says Morbidelli. “The model could explain the masses and orbits of super-Earths but predicted that all are water-rich. Recent observations, however, have demonstrated that most super-Earths are rocky, like the Earth, even if surrounded by a hydrogen atmosphere. That was the death sentence for our old model.”

Over the past five years, the story has gotten even weirder as scientists—including a team led by Andrew Howard, professor of astronomy at Caltech; Lauren Weiss, assistant professor at the University of Notre Dame; and Erik Petigura, formerly a Sagan Postdoctoral Scholar in Astronomy at Caltech and now a professor at UCLA—have studied these exoplanets and made an unusual discovery: while there exists a wide variety of types of super-Earths, all of the super-Earths within a single planetary system tend to be similar in terms of orbital spacing, size, mass, and other key features.

“Lauren discovered that within a single planetary system, super-Earths are like ‘peas in a pod,'” says Howard, who was not directly connected with the Batygin-Morbidelli paper but has reviewed it. “You basically have a planet factory that only knows how to make planets of one mass, and it just squirts them out one after the other.”

So, what single process could have given rise to the rocky planets in our solar system but also to uniform systems of rocky super-Earths?

“The answer turns out to be related to something we figured out in 2020 but didn’t realize applied to planetary formation more broadly,” Batygin says.

In a 2020 paper published in The Astrophysical Journal, Batygin and Morbidelli proposed a new theory for the formation of Jupiter’s four largest moons (Io, Europa, Ganymede, and Callisto).

In essence, they demonstrated that for a specific size range of dust grains, the force dragging the grains toward Jupiter and the force (or entrainment) carrying those grains in an outward flow of gas cancel each other perfectly. That balance in forces created a ring of material that constituted the solid building blocks for the subsequent formation of the moons. Further, the theory suggests that bodies would grow in the ring until they become large enough to exit the ring due to gas-driven migration. After that, they stop growing, which explains why the process produces bodies of similar sizes.

In their new paper, Batygin and Morbidelli suggest that the mechanism for forming planets around stars is largely the same. In the planetary case, the large-scale concentration of solid rocky material occurs at a narrow band in the disk called the silicate sublimation line—a region where silicate vapors condense to form solid, rocky pebbles.

“If you’re a dust grain, you feel considerable headwind in the disk because the gas is orbiting a bit more slowly, and you spiral toward the star; but if you’re in vapor form, you simply spiral outward, together with the gas in the expanding disk. So that place where you turn from vapor into solids is where material accumulates,” Batygin says.

The new theory identifies this band as the likely site for a “planet factory,” that over time, can produce several similarly sized rocky planets. Moreover, as planets grow sufficiently massive, their interactions with the disk will tend to draw these worlds inward, closer to the star.

Batygin and Morbidelli’s theory is backed up by extensive computer modeling but began with a simple question. “We looked at the existing model of planet formation, knowing that it does not reproduce what we see, and asked, ‘What assertion are we taking for granted?'” Batygin says. “The trick is to look at something that everybody takes to be true but for no good reason.”

In this case, the assumption was that solid material is dispersed throughout the protoplanetary disks. By jettisoning that assumption and instead supposing that the first solid bodies form in rings, the new theory can explain different types of planetary systems with a unified framework, Batygin says.

If the rocky ring contains a lot of mass, planets grow until they migrate away from the ring, resulting in a system of similar super-Earths. If the ring contains little mass, it produces a system that looks much more like our solar system’s terrestrial planets.

“I’m an observer and an instrument builder, but I pay extremely close attention to the literature,” Howard says. “We get a regular dribble of little-but-still-important contributions. But every five years or so, someone comes out with something that creates a seismic shift in the field. This is one of those papers.”