Spin flips show how galaxies grow from the cosmic web 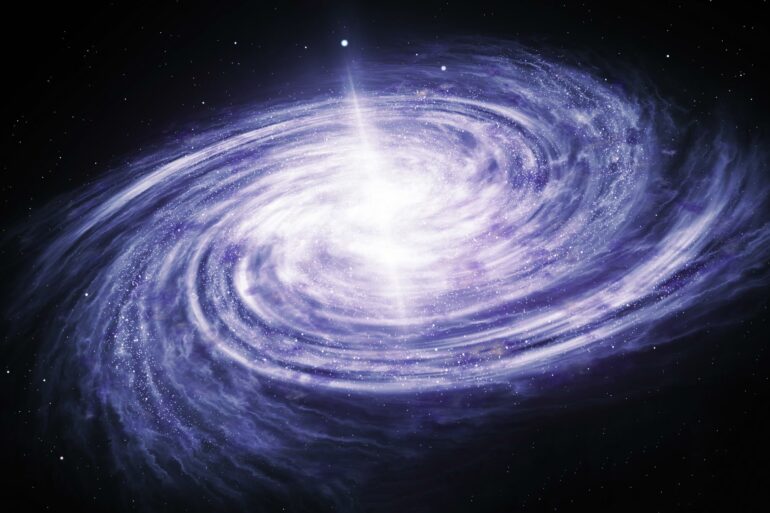 The alignment between galaxy spins and the large-scale structure of the universe reveals the processes by which different components of galaxies form.

The large-scale structure of the universe is traced by the distribution of galaxies. This “cosmic web” consists of giant filamentary structures linking massive clusters of galaxies.

“It all relates to the mass of the bulge,” says astrophysicist Dr. Stefania Barsanti from the Australian National University, lead author of the paper and a member of the ASTRO 3D Centre of Excellence.

“Galaxies which are mostly disk, with a low-mass bulge, tend to have their spin axis parallel to the nearest filament. This is because they form mainly from gas falling onto the filament and ‘rolling it up.’ Galaxy bulges grow when galaxies merge, generally as they move along the filament. So, mergers also tend to ‘flip’ the alignment between the galaxy spin and the filament from parallel to perpendicular.”

“We think that mergers must be more likely as galaxies move along the filaments towards each other. The direction of these mergers drives the spin flip,” says Prof. Scott Croom, an astronomer at the University of Sydney and a co-author on the paper.

This discovery sheds light on the formation of two main components of galaxies, and how they relate to the large-scale structures and motions of matter in the cosmic web.

“Our motivation was to try to understand why galaxies spin and how they acquire their angular momentum from the material that forms them,” says Dr. Barsanti.

“Through this study, we can understand how mergers play an important role in the formation of galaxies, both the central bulge component and the spin flipping,” she says. “This points to particular formation channels for how galaxies start to spin and how the spin changes as the galaxy evolves.”

Although this evolution has been suggested by computer simulations, this study is the first time scientists have used direct observation to confirm the growth of a galaxy’s central bulge can cause it to flip alignments.

“This is a subtle signal that is really hard to detect in the observations,” says Dr. Barsanti.

It has been made possible with the advent of integral field spectroscopy, a technique in which an optical instrument combines spectrographic and imaging capabilities to build a 3D image of a galaxy and at the same time resolve its internal motions.

Researchers used SAMI to survey 3,068 galaxies between 2013 and 2020. This staggering amount of data has taken years to study and has supplied direct evidence for the paper published.

“With the SAMI Galaxy Survey we have spatially resolved spectroscopy allowing us to map the galaxy, with spectra at many points across the galaxy,” says Dr. Barsanti. “This tells us the internal motions of the stars and gas within the galaxy, so we can measure its overall spin. These results will inform the next big stage of our research, the Hector Galaxy Survey. Hector is the next-generation spectrograph replacing SAMI at the Anglo-Australian Telescope, which we’ll use to survey around 30,000 galaxies.”

Professor Stuart Wyithe of the University of Melbourne, who is Director of ASTRO 3D, says the paper advances the Centre’s key goals of tracing the distribution of matter from the earliest times in the universe to the present day, and to build a 3D picture of the formation and evolution of the universe that we see today.

“Using the power of the SAMI galaxy survey, which measured the 3D structure of individual galaxies as well as their position in space, this paper shows how the motions of mass in galaxies and positions of galaxies are connected, which is an essential piece in understanding how galaxies assembled,” says Professor Wyithe