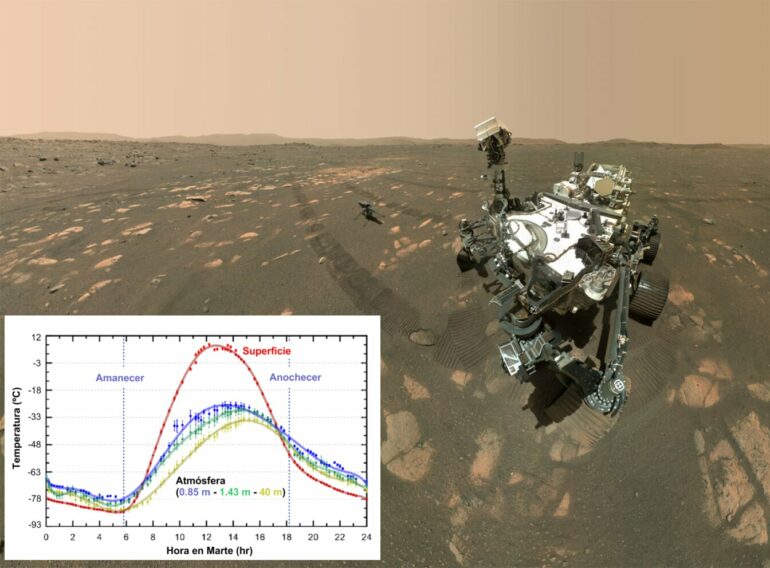 Perseverance is a NASA autonomous vehicle that arrived at the Jezero Crater (the bed of an ancient, now dried-up lake on Mars) on February 18, 2021. The rover is equipped with seven novel, complex scientific instruments dedicated to exploring the planet’s surface in search of signs of possible past life, collecting and depositing samples to be brought back to Earth, testing new technologies for use in human exploration, and studying the planet’s atmosphere in detail.

With regard to the aim of studying the atmosphere, the MEDA (Mars Environmental Dynamics Analyzer) instrument has been obtaining novel results. MEDA’s lead researcher is José Antonio Rodríguez-Manfredi of the Centre for Astrobiology (CAB) in Madrid, and it has had the participation of a team from the UPV/EHU’s Planetary Sciences Research Group. The instrument comprises a set of sensors that measure temperature, pressure, wind, humidity and properties of the dust that is always present in suspension in the Mars atmosphere.

Perseverance has now completed its investigation of the atmosphere throughout the first Martian year (which lasts approximately two Earth years). A preview of the results, which appears on the cover, is published today in the January issue of the journal Nature Geoscience.

Specifically, the UPV/EHU team, formed by Agustín Sánchez-Lavega, Ricardo Hueso, Teresa del Río-Gaztelurrutia and the Ph.D. student Asier Munguira, has led the study of the seasonal and daily cycles of temperature and pressure, as well as their significant variations on other time scales resulting from very different processes.

Throughout the seasons, the average air temperature at the Jezero Crater, located near the planet’s equator, is around minus 55 degrees Celsius, but varies greatly between day and night, with typical differences of around 50 to 60 degrees. In the middle of the day, the heating of the surface generates turbulent movements in the air as a result of the rise and fall of air masses (convection) which cease in the evening, when the air settles.

Pressure sensors, on the other hand, show in detail the seasonal change of the tenuous Martian atmosphere produced by the melting and freezing of atmospheric carbon dioxide at the polar caps, as well as by a complex, variable daily cycle, modulated by thermal tides in the atmosphere.

“The pressure and temperature of the Mars atmosphere oscillate with periods of the Martian solar day (somewhat longer than the Earth’s, it averages at 24 hrs 39.5 min) and with their submultiples, following the daily cycle of sunshine greatly influenced by the amount of dust and the presence of clouds in the atmosphere,” says Agustín Sánchez-Lavega, professor at the Faculty of Engineering—Bilbao (EIB) and co-researcher on the Mars 2020 mission.

Both sensors are also detecting dynamic phenomena in the atmosphere that occur in the vicinity of the rover, for example, those produced by the passage of whirlwinds known as “dust devils” because of the dust they sometimes kick up, or the generation of gravity waves whose origin is not yet well understood.

“The dust devils are more abundant at Jezero than elsewhere on Mars, and can be very large, forming whirlwinds more than 100 meters in diameter. With MEDA we have been able to characterize not only their general aspects (size and abundance) but also to unravel how these whirlwinds function,” says Ricardo Hueso, lecturer at the Faculty of Engineering—Bilbao (EIB).

MEDA has also detected the presence of storms thousands of kilometers away, very similar in origin to terrestrial storms, as shown by the images from orbiting satellites, and which move along the edge of the north polar cap, formed by the deposition of carbonic snow.

Within the rich variety of phenomena studied, MEDA has been able to characterize in detail the changes that have taken place in the atmosphere by one of the dreaded dust storms, such as the one that developed in early January 2022. Its passage over the rover led to abrupt changes in temperature and pressure accompanied by strong gusts of wind, which kicked up dust and hit the instruments, damaging one of the wind sensors.

Spin flips show how galaxies grow from the cosmic web

“MEDA is providing high-precision, meteorological measurements enabling the Martian atmosphere to be characterized, for the first time, from local scales at distances of a few meters, as well as on the global scale of the planet by collecting information on what is happening thousands of kilometers away. All this will lead to a better understanding of the Martian climate and improve the predictive models we use,” says Sánchez-Lavega.

Provided by
University of the Basque Country


Citation:
The rich meteorology of Mars studied in detail from the Perseverance rover (2023, January 18)