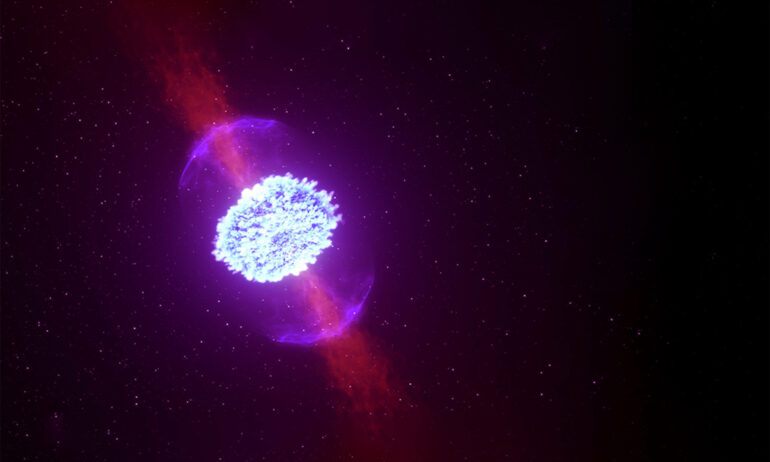 The standard view of gamma-ray bursts as a signature for different types of dying stars might need a rewrite. Recent astronomical observations, supported by theoretical modeling, reveal a new observational fingerprint of neutron-star mergers, which may shed light on the production of heavy elements throughout the universe.

“Astronomers have long believed that gamma-ray bursts fell into two categories: long-duration bursts from imploding stars and short-duration bursts from merging compact stellar objects,” said Chris Fryer, an astrophysicist and Laboratory Fellow at Los Alamos National Laboratory. Fryer is coauthor and leader of the modeling team on a paper about the phenomenon published today in Nature. “But in a recently observed event, we’ve found a kilonova along with a long-duration gamma-ray burst, and that has thrown a wrench into this simple picture.”

The long and short of gamma-ray bursts

Long-duration GRBs (longer than two seconds) are typically associated with supernovae, while short-duration GRBs (less than two seconds) are commonly associated with neutron-star mergers. These various forms of observable electromagnetic emission are all known as transients. Neutron-star mergers form some of the heaviest elements—those beyond iron on the periodic table.

On Dec. 11, 2021, several observatories and satellites recorded a very bright, 50-second gamma-ray burst and optical, infrared and X-ray emissions associated with the burst. This long burst was relatively nearby—about a billion light years away in a different galaxy than the Milky Way—but its emission characteristics did not fit the profile of long-burst events. Instead, the evidence pointed to a compact-object merger in a theorized but previously unobserved hybrid event that produces a kilonova but emits a long-duration gamma-ray burst.

“Our modeling team at Los Alamos compared the observation to a suite of supernova and kilonova simulations, and we were unable to convincingly match the signal to a supernova model, whereas several kilonova models give a good match of the optical and infrared data points,” said Ryan Wollaeger, a coauthor of the paper and member of the Los Alamos modeling team. “There is still more theoretical modeling to do to fully understand this transient, however.”

The observation, dubbed GRB211211A, provides the first direct evidence of a hybrid event. Gravitational-wave observations would confirm the nature of GRB211211A, but unfortunately sensitive gravitational wave detectors like LIGO (Laser Interferometer Gravitational-Wave Observatory) were not operating at the time of this detection.

Although the long-duration burst challenges the accepted understanding of compact-binary-merger models, Fryer said, a merger nonetheless explains all the other observed features of GRB211211A.

Fryer and his Ph.D. advisor Stan Woosley coined and developed in 1999 the widely accepted black-hole accretion-disk paradigm as the simplest explanation for the two classes of gamma-ray-burst events. Under this paradigm, merging compact objects, with their halos of gravitationally attracted material (accretion disks), would produce short-duration gamma-ray bursts. The collapse of massive stars into supernovae, with longer-lived accretion disks, would produce longer bursts. A growing set of observations have supported these two classes and the types of stellar objects associated with them, Fryer said.

Lunar soil has the potential to generate oxygen and fuel

An international team comprising researchers at universities, research institutes, NASA and Los Alamos collaborated on the work. Fryer led the modeling team, which included Wollaeger and Chase. The Los Alamos team has developed supernova and kilonova modeling codes that run on supercomputers. Applying these codes to the observational data was key to interpreting the observations of GRB211211A.