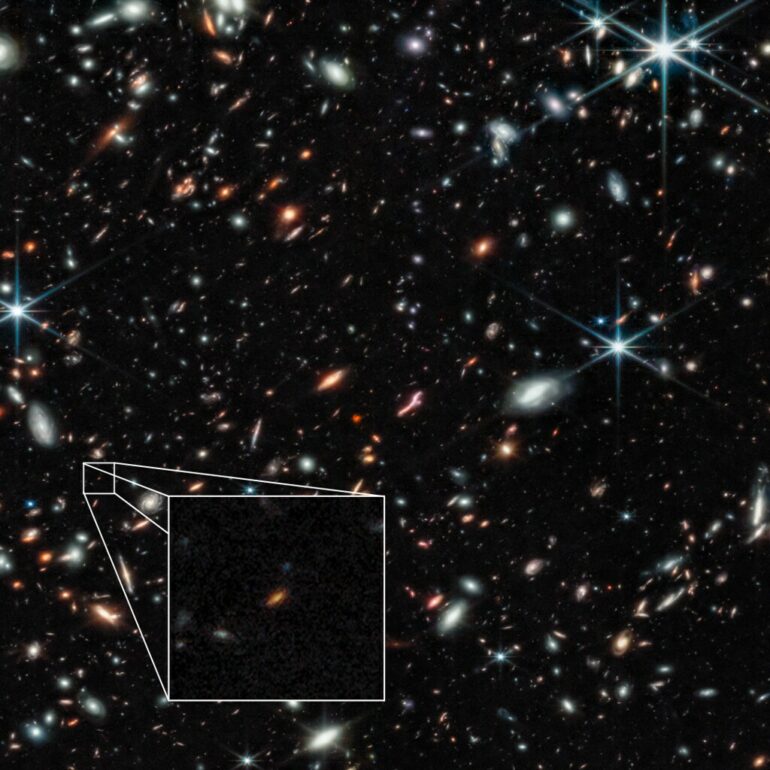 A few days after officially starting science operations, the NASA/ESA/CSA James Webb Space Telescope propelled astronomers into a realm of early galaxies, previously hidden beyond the grasp of all other telescopes. Webb is now unveiling a very rich Universe where the first forming galaxies look remarkably different from the mature galaxies seen around us today.

Researchers have found two exceptionally bright galaxies that existed approximately 300 and 400 million years after the Big Bang. Their extreme brightness is puzzling to astronomers. The young galaxies are transforming gas into stars as fast as they can and they appear compacted into spherical or disk shapes that are much smaller than our Milky Way galaxy. The onset of stellar birth may have been just 100 million years after the Big Bang, which happened 13.8 billion years ago.

“Everything we see is new. Webb is showing us that there’s a very rich Universe beyond what we imagined,” said Tommaso Treu of the University of California at Los Angeles, a co-investigator on one of the Webb programs. “Once again the Universe has surprised us. These early galaxies are very unusual in many ways.”

The results are from Webb’s GLASS-JWST Early Release Science Program (Grism Lens-Amplified Survey from Space), and Cosmic Evolution Early Release Science Survey (CEERS). Two research papers, led by Marco Castellano of the National Institute for Astrophysics in Rome, Italy, and Rohan Naidu of the Center for Astrophysics | Harvard & Smithsonian and the Massachusetts Institute of Technology in Cambridge, Massachusetts have been published in The Astrophysical Journal Letters.

In just four days of analysis, researchers found two exceptionally bright galaxies in the GLASS-JWST images. These galaxies existed approximately 450 and 350 million years after the Big Bang (with redshifts of approximately 10.5 and 12.5, respectively), which future spectroscopic measurements with Webb will help confirm.

“With Webb, we were amazed to find the most distant starlight that anyone had ever seen, just days after Webb released its first data,” said Rohan Naidu of the more distant GLASS galaxy, referred to as GLASS-z12, which is believed to date back to 350 million years after big bang. The previous record holder is galaxy GN-z11, which existed 400 million years after the big bang (redshift 11.1), and identified in 2016 by Hubble and Keck Observatory in deep-sky programs.

“Based on all the predictions, we thought we had to search a much bigger volume of space to find such galaxies,” said Castellano.

“These observations just make your head explode. This is a whole new chapter in astronomy. It’s like an archaeological dig, when suddenly you find a lost city or something you didn’t know about. It’s just staggering,” added Paola Santini, fourth author of the Castellano et al. GLASS-JWST paper.

“While the distances of these early sources still need to be confirmed with spectroscopy, their extreme brightnesses are a real puzzle, challenging our understanding of galaxy formation,” noted Pascal Oesch of the University of Geneva in Switzerland.

The Webb observations nudge astronomers toward a consensus that an unusual number of galaxies in the early Universe were much brighter than expected. This will make it easier for Webb to find even more early galaxies in subsequent deep sky surveys, say researchers.

“We’ve nailed something that is incredibly fascinating. These galaxies would have had to have started coming together maybe just 100 million years after the Big Bang. Nobody expected that the dark ages would have ended so early,” said Garth Illingworth of the University of California at Santa Cruz. “The primal Universe would have been just one hundredth of its current age. It’s a sliver of time in the 13.8-billion-year-old evolving cosmos.”

Naidu/Oesch team member Erica Nelson of the University of Colorado noted that “our team was struck by being able to measure the shapes of these first galaxies; their calm, orderly disks question our understanding of how the first galaxies formed in the crowded, chaotic early Universe.” This remarkable discovery of compact disks at such early times was only possible because Webb’s images are so much sharper, in infrared light, than Hubble’s.

“These galaxies are very different from the Milky Way or other big galaxies we see around us today,” said Treu.

Illingworth emphasized that the two bright galaxies found by these teams have a lot of light. He said one option is that they could have been very massive, with lots of low-mass stars, like later galaxies. Alternatively, they could be much less massive, consisting of far fewer extraordinarily bright stars, known as Population III stars.

Long theorized, they would be the first stars ever born, blazing at blistering temperatures and made up of only primordial hydrogen and helium; only later would stars cook up heavier elements in their nuclear fusion furnaces. No such extremely hot, primordial stars are seen in the local Universe.

Detailed images of a shock wave that extends for 6.5 million light years

“Indeed, the most distant source is very compact, and its colors seem to indicate that its stellar population is particularly devoid of heavy elements and could even contain some Population III stars. Only Webb spectra will tell,” said Adriano Fontana, second author of the Castellano et al. paper and a member of the GLASS-JWST team.

Present Webb distance estimates to these two galaxies are based on measuring their infrared colors. Eventually, follow-up spectroscopy measurements showing how light has been stretched in the expanding Universe will provide independent verification of these cosmic yardstick measurements.