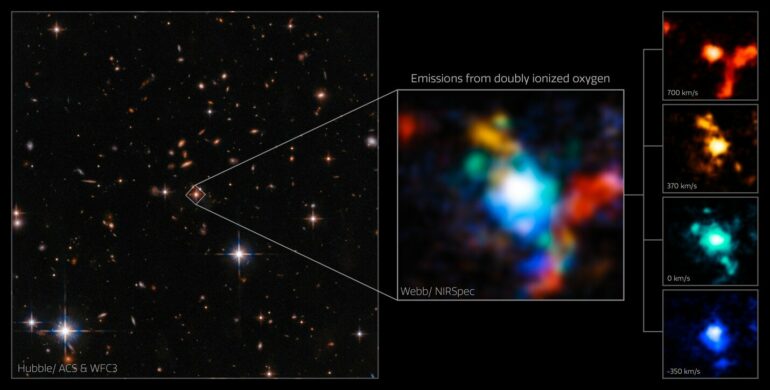 Using the James Webb Space Telescope to look back in time at the early universe, astronomers discovered a surprise: a cluster of galaxies merging together around a rare red quasar within a massive black hole. The findings by Johns Hopkins University and an international team offer an unprecedented opportunity to observe how billions of years ago galaxies coalesced into the modern universe.

“We think something dramatic is about to happen in these systems,” said co-author Andrey Vayner, a Johns Hopkins postdoctoral fellow who studies the evolution of galaxies. “The galaxy is at this perfect moment in its lifetime, about to transform and look entirely different in a few billion years.”

The work is in press in Astrophysical Journal Letters and available today on the arXiv paper repository.

The James Webb Space Telescope, launched last December by NASA, the European Space Agency, and the Canadian Space Agency, is the largest, most powerful telescope ever sent into space. Its initial general observations were revealed in July, but this quasar imagery is one of just 13 “early look” projects selected through a highly competitive global competition to decide where the telescope is pointed during its first months of operation.

In Baltimore, the Johns Hopkins team heard their chosen target would be observed within days of President Biden’s unveiling of the Webb’s debut pictures on July 11, so they stayed close to their computers. That following summer Saturday, Vayner and graduate student Yuzo Ishikawa were repeatedly refreshing the Webb database when suddenly the data arrived, leading to a hastily assembled multinational team confab on Sunday to try to make sense of the jaw-droppingly detailed raw images.

Although earlier observations of this area by NASA/ESA Hubble Space Telescope and the Near-Infrared Integral Field Spectrometer instrument on the Gemini-North telescope pinpointed the quasar and hinted at the possibility of a galaxy in transition, no one suspected that with Webb’s crisp imaging they’d see multiple galaxies, at least three, swirling the region.

“With previous images we thought we saw hints that the galaxy was possibly interacting with other galaxies on the path to merger because their shapes get distorted in the process and we thought we maybe saw that,” said co-principal investigator Nadia L. Zakamska, a Johns Hopkins astrophysicist who helped conceive the project back in 2017 with then-Johns Hopkins postdoc Dominika Wylezalek, who’s now the group leader at the University of Heidelberg.

“But after we got the Webb data, I was like, ‘I have no idea what we’re even looking at here, what is all this stuff!’ We spent several weeks just staring and staring at these images.”

The Webb revealed at least three galaxies moving incredibly fast, suggesting a large amount of mass is present. The team believes this could be one of the densest known areas of galaxy formation in the early universe.

Because light takes time to travel to us, when we look at objects like this one in the very distant regions of the universe, we’re seeing light that was emitted about 11.5 billion years ago, or from the earliest stages of the universe’s evolution. Massive galaxy swarms like this one were likely common then, Zakamska said.

“It’s super exciting to be one of the first people to see this really cool object,” said Ishikawa, who contributed to the interpretation of the galaxy swarm.

Even Vayner, who’d dreamed of using Webb data since he first heard about the telescope as an undergraduate more than a decade ago, and thought he knew what to expect, was shocked to see his long-studied spot in the universe revealed with such clarity.

“It really will transform our understanding of this object,” said Vayner, who was instrumental in adapting the raw Webb data for scientific analysis.

The blindingly bright quasar, fueled by what Zakamska calls a “monster” black hole at the center of the galactic swirl, is a rare “extremely red” quasar, about 11.5 billion years old and one of the most powerful ever seen from such distance. It’s essentially a black hole in formation, Vayner said, eating the gas around it and growing in mass. The clouds of dust and gas between Earth and the glowing gas near the black hole make the quasar appear red.

The team is already working on follow-up observations into this unexpected galaxy cluster, hoping to better understand how dense, chaotic galaxy clusters form, and how it is affected by supermassive black hole at its heart.

“What you see here is only a small subset of what’s in the data set,” Zakamska said. “There’s just too much going on here so we first highlighted what really is the biggest surprise. Every blob here is a baby galaxy merging into this mommy galaxy and the colors are different velocities and the whole thing is moving in an extremely complicated way. We can now start to untangle the motions.”