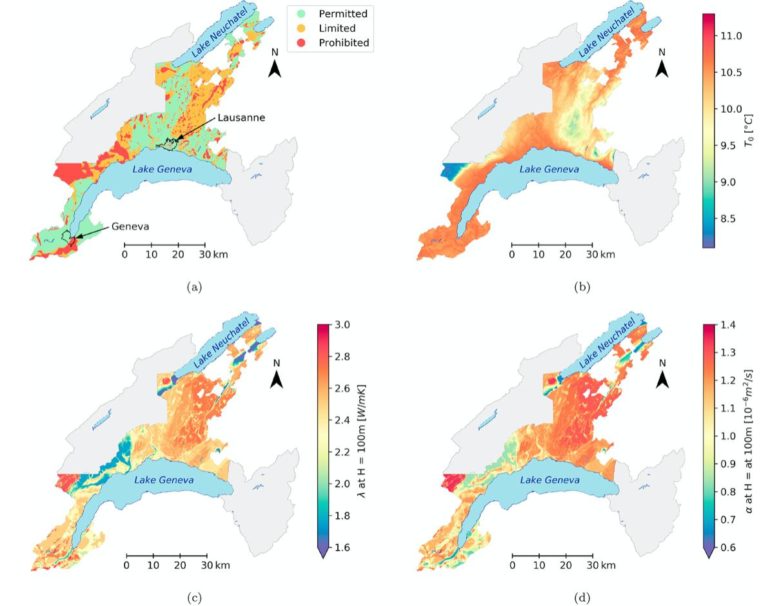 An EPFL Ph.D. student has calculated the maximum amount of geothermal energy that could theoretically be extracted using ground-source heat pumps in the Cantons of Vaud and Geneva. In a study combining data on the area available for such systems with computer modeling techniques, she found stark differences between geothermal energy’s potential in urban versus rural areas.

Switzerland is one of the countries in Europe that relies the most on geothermal energy for residential heating. A study conducted by the Swiss Federal Office of Energy in 2019 found that the country has 101,600 ground-source heat pumps (GSHPs) – the “highest concentration per square kilometer in the world.” Many of these pumps are installed in residential yards at depths of up to 400 meters and use a vertical closed-loop system to circulate heat up to the surface.

The advantage of GSHPs is that they have little impact on the environment. They can heat homes and buildings all year long since geothermal energy is a stable heat source. And they offer a promising alternative for decarbonizing the heating sector. In Switzerland, buildings’ heating and cooling systems account for a third of total energy demand, and 75% of the country’s energy comes from fossil fuels like oil and natural gas.

In 2017, Doris Leuthard, then-president of the Swiss Confederation, called geothermal energy an “incredible energy source” but warned that it’s not infinite; it needs to be extracted according to specific rules. For instance, the borehole heat exchangers used in GSHPs should be installed a certain distance apart to prevent thermal interference—the heat-exchanger equivalent of a short circuit—and prevent the ground from cooling. “The heat-transfer fluid absorbs the heat that’s in the ground,” says Alina Walch, a Ph.D. student at EPFL’s Solar Energy and Building Physics Laboratory. “If too many of these exchangers are packed into a tiny space, the ground will cool off, which is something we absolutely need to avoid.”

Thermal interference is one of the factors that a team of scientists, including Walch, took into account in a study published in Renewable Energy on 18 November. They calculated the technical potential of GSHPs in the Cantons of Vaud and Geneva. “The technical potential is the maximum amount of geothermal energy that can be extracted by the heat pumps using all the available area in the two cantons, assuming they operate at at least 80% of their rated power,” she says.

The research team estimated the available area using existing topographical data on Switzerland, excluding built environments and natural habitats like forests from their study. They then simulated GSHPs installed throughout that area based on factors such as ground temperature, thermal conductivity and thermal diffusivity. “We incorporated the various technical constraints and estimated the optimal borehole spacing that would both comply with installation standards and maximize the extractable heat,” says Walch.

Theirs is the first study of its scale in Switzerland to consider not just the ground’s geothermal capacity but also the technical limitations of GSHPs. The scientists estimate that the annual technical potential of the region they studied is 4.6 TWh, which corresponds to about a third of its total heating demand. They also calculated a maximum energy density of 15.5 kWh/m2. “Geothermal energy has only limited potential to serve as the region’s only source. It could cover demand in many suburban and rural areas, but would fall considerably short in urban centers,” says Walch. Urban planners can use this information in their technical and economic feasibility studies of GSHP system deployment.

The research team also found that the cumulative installed borehole depth shouldn’t exceed 2 km per hectare in order to avoid over-exploitation of the heat capacity of the ground.

Walch stresses that their findings are only theoretical for now; the study doesn’t factor in local phenomena like phreatic zones and groundwater flows, which can affect the time needed for the ground to cool. It will be essential to drill test bores before installing borehole heat exchangers.

The team hopes that by quantifying the heat-generation capacity of shallow geothermal energy, and by pinpointing areas where additional energy sources will be required, their work will inform decarbonization strategies for Switzerland’s heating sector. “Our ultimate goal is to conduct nationwide studies and combine these findings with similar ones for other types of renewable energy,” says Walch, also worked on a study to evaluate Switzerland’s potential solar-power capacity. “It’s important to estimate the technical potential independent of heat demand. We’d like to evaluate the capacity of hybrid systems combining geothermal and solar power, using data on both these renewable energies.”