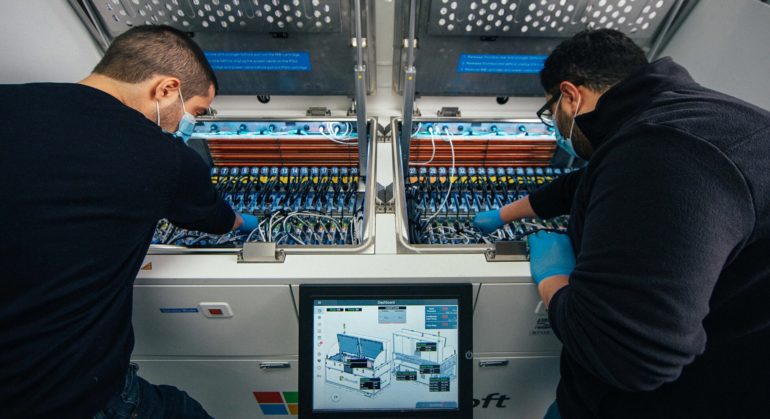 Microsoft has implemented boiling liquid to help keep datacenter servers at reasonable temperatures. The company uses electronic equipment and liquid capable of boiling at 122 degrees Farenheit, 90 degrees below the boiling point of water.

Once the computer processors within the datacenters reach a certain temperature due to labor, the boiling effect moves heat away from the servers. This movement allows the processors to continue operating at full power without the risk of failure from overheating.

Microsoft engineered this solution using a tank that takes the fluid vapor from its liquid contents and exposes the mist to a cooling lid. This process transforms that vapor back into liquid and rain down onto the servers in order to cool the machines. This process of vaporization and condensation for cooling is known as a closed loop cooling system.

Microsoft has announced being the first cloud provider to use two-phase immersion cooling in a production environment. In fact, the company has acknowledged using this cooling process as a means to accommodate the demand for larger, more powerful computer processors at a time when air-cooled computer chip technology is harder to come by.

For decades, chip advances came from packing more transistors onto chips of the same size, just about doubling computer processor speed every two years without requiring increased electrical power. Intel co-founder Gordon Moore predicted this trend in 1965, projecting it to continue for at least 10 years, thus giving the doubling phenomenon the name Moore’s Law. Finally, in the later 2010s, the trend began to slow down.

This slow stems from the fact that transistor widths have decreased in size to the atomic scale and are approaching a physical limit. However, in the meantime, demand for faster computer processes to suit higher performance applications like artificial intelligence has only risen. To meet this need, the computing industry has adopted chip architectures capable of managing more electric power. In fact, central processing units (CPUs) have increased 150 watts to over 300 watts per chip. On the other hand, graphical processing units (GPUs) have increased to over 700 watts per chip.

When more electric power flows through these processors, the hotter the chips become and the more cooling they require in order to prevent malfunctioning. Indeed, Microsoft engineers have confirmed that rather than simply cooling the air around these chips, the technology requires its physical surface to actually be cooled.

Therefore, using liquid to cool off the chips has proven very helpful so far in managing the demand for increased electric power.

Beat the heat in 3-D chip stacks with ICECool

Singapore sends out drones to watch over reservoirs