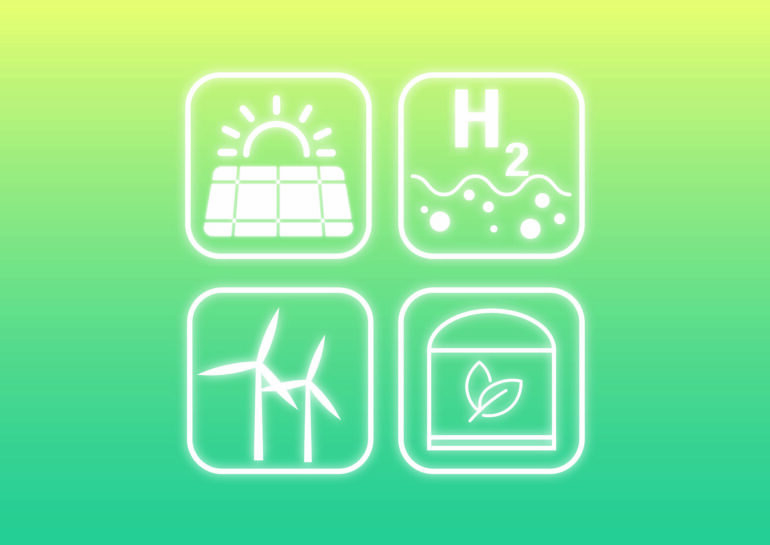 Green hydrogen would likely supply less than 1% of total energy globally by 2035, while the European Union might hit the 1% mark a little earlier by about 2030. In particular, the EU’s 2030 plan to supply 10 million tons of green hydrogen with domestic capacity will be out of reach, unless policy makers can foster growth that is unprecedented for energy technologies. By 2040, a breakthrough to higher green hydrogen shares is more likely, but large uncertainties prevail, which increase today’s investment risks. However, history shows that emergency-like policy measures could yield substantially higher growth rates, expediting the breakthrough and increasing the likelihood of future hydrogen availability.

It has spurred a surge of enthusiasm in recent years and plays a pivotal role in facilitating many net-zero emissions scenarios: Green hydrogen and derived e-fuels are based on renewable electricity and produced through a process called electrolysis, splitting water molecules H2O into hydrogen and oxygen.

“Much of the debate and research around hydrogen has revolved around demand-related questions of suitable applications, markets, and sectors. But so far no study analyzed the bottleneck of possible expansion pathways for electrolysis—a supply technology in its infancy that needs to experience rapid innovation and deployment to unleash its potential for climate change mitigation,” lead author Adrian Odenweller from the Potsdam Institute for Climate Impact Research (PIK) explains. The study appears in Nature Energy.

A breakthrough for green hydrogen is not a given. Decisive policy action is required

Today’s electrolyzers are mostly small and individually manufactured; yet, global capacity needs to grow 6000–8000 fold by 2050 to contribute to climate neutrality scenarios compatible with the Paris Agreement. This dwarfs the simultaneously required 10-fold increase of renewable power, which is readily available and cost competitive.

Using an energy technology diffusion computer simulation and exploring thousands of possible worlds, the research team took a deep dive into probability and feasibility of ramping up electrolysis capacities.

“The broad success of green hydrogen is not at all a given. Even with electrolysis capacities growing as fast as wind and solar power, there is strong evidence of short-term scarcity and long-term uncertainty in terms of green hydrogen availability,” PIK co-author Falko Ueckerdt says. “Both impede investment in hydrogen end-uses and infrastructure, reducing green hydrogen’s potential and jeopardizing climate targets. Nonetheless, while this might make green hydrogen a risky bet from a policy perspective, historic analogs also suggest that emergency-like policy measures could foster substantially higher growth rates, expediting the breakthrough and increasing the likelihood of future hydrogen availability.”

Such analogs include situations of wartime mobilization (e.g., U.S. aircraft or liberty ships in World War II), of massive public investments and central coordination (e.g., nuclear in France or high-speed rail in China), or of market-driven deployment of highly modular IT innovations with low coordination requirements (e.g., internet hosts or smartphones).

Knowledge about hydrogen—from availability to costs—will grow very fast in the coming years, the authors argue. Fostering rapid investments into green hydrogen supply chains that enable unconventionally high growth rates of electrolysis would broaden the feasibility space beyond what has been experienced for energy analogs such as wind and solar.

“This could break the vicious cycle of uncertain supply, insufficient demand, and incomplete infrastructure, and turn it into a positive feedback mechanism, in which each component bolsters the others. Short-term scarcity and long-term uncertainty are two sides of the same coin and could be resolved together through stronger policy support that engenders shared expectations of rapid growth,” says co-author Gregory Nemet of the University of Wisconsin-Madison.

Policies that kick-start a rapid deployment of electrolyzers delivering Gigawatt-scale capacities in the upcoming few years could help to unlock substantial innovation and scaling effects and allow green hydrogen to meet demand in sectors inaccessible to direct electrification, according to the study. In conjunction with expanding renewable electricity, it could keep the window open to reaching a broader and more prominent role of hydrogen in a climate-neutral energy system.

However, policy makers should be aware that there remains a risk of overestimating green hydrogen’s potential, PIK co-author Gunnar Luderer notes, “Even under favorable developments for the foreseeable future, hydrogen supply will be much too scarce to substitute fossil fuel use on a broad scale. Policymakers should prioritize hydrogen incentives in sectors where no other alternatives exist, such as heavy industry (e.g. steel), or power supply in hours of low wind and solar electricity generation. However, hydrogen cannot be used as excuse to delay the roll-out of other readily available clean options such as electric mobility or heat pumps. To effectively reduce greenhouse gas emissions and limit climate risks, we need to scale all crucial zero-carbon technologies with full effort.”