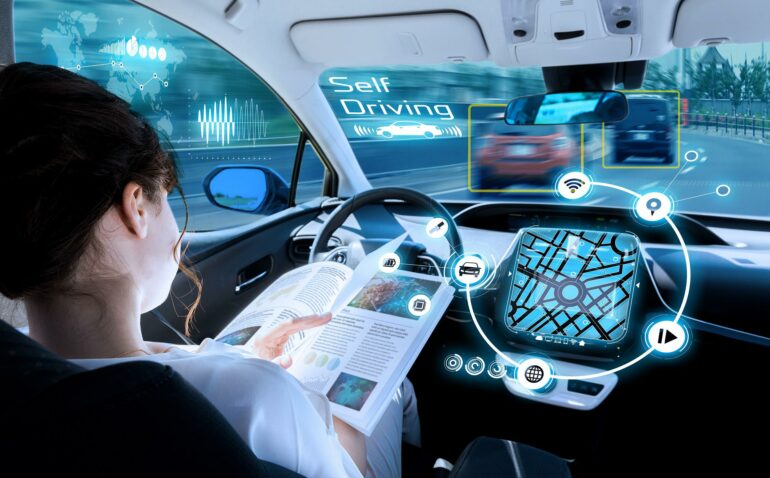 Akin to when Model Ts traveled alongside horses and buggies, autonomous vehicles (AVs) and human-driven vehicles (HVs) will someday share road. How to best manage the rise of AVs is the topic of a new Carnegie Mellon policy brief, Mixed-Autonomy Era of Transportation: Resilience & Autonomous Fleet Management.

Debate continues as to when AVs will dominate our streets, but one of the brief’s authors, Carlee Joe-Wong, says that “once AVs begin to deploy, there’s probably not going to be any going back. So, there is need to start talking about policies now, to study them thoroughly and get them right by the time AVs arrive.”

Joe-Wong, an associate professor of electrical and computer engineering, and the research team asked themselves “what is different when you have AVs in the mix compared to if you just have HVs? We realized that one of the main differences between AVs and HVs is that AVs are altruistic and HVs are selfish.”

AVs can anticipate what is going to happen and reroute themselves, for example in the event of road construction or an accident. Programmed to operate safely and follow rules, AVs can take altruistic actions that benefit other vehicles and not just themselves. Humans in a hurry, may not be so generous with their time.

The price of selfish driving becomes evident when examining traffic flow. As selfish behaving cars move in and out of a traffic system, eventually the system will reach equilibrium, a balanced state, but traffic may not be flowing as efficiently as it could. For example, equilibrium can be reached when traffic snarls along bumper-to-bumper. “Sometimes equilibrium is far from optimum,” says Joe-Wong.

The researchers believe altruism could improve traffic flow by avoiding suboptimal equilibria, and not everybody has to be a nice guy to improve travel times. In simulations, altruistic states come into play when AVs make up 20% to 50% of the vehicles on the road. The report suggests ways to reward altruism, including toll exemptions, parking discounts, etc.

Finding the best operating policies for AV fleets is another topic covered in the report. AVs have the capacity to work in sync, yet centrally controlling thousands of AVs will lead to computation issues and communication delays. The researchers want to strike a balance between centralized and decentralized policies using reinforcement learning, a machine learning training method.

The team suggests that fleet operators train models to manage AV fleets locally. If new traffic patterns occur, then the models are updated, especially to direct people way from incidents. However, if traffic flows unabated, then fewer updates are needed, which reduces the communications between AVs on the road and AVs reporting back to a centralized server.

The final problem the researchers examined was how to deal with traffic congestion and avoid cascading failures that occur when a failure in a system triggers a sequence of events that lead to a networkwide failure.

Operating at optimal equilibrium, applying reinforcement learning, and having a higher proportion of collaborative AVs will reduce congestion. However, to address cascading failures, the researchers factored in other modes of transportation found in urban networks. The researchers added bus, subway, railway, and bike-sharing systems to their models, and they were able to show that if passengers were adjusted between varying modes of transportations this would maximize the use of the whole network and prevent it from overloading and failing.

Based on their findings, the team recommends that when planning agencies create traffic flow redistribution policies for AVs they consider how to incorporate multiple interdependent transportation systems to keep people moving.

In the era of mixed autonomy, altruistic AVs could act as coordinators that keep traffic flowing by eliciting positive actions from HVs. Although it will take time before AVs outnumber human-driven vehicles, all drivers will notice improved traffic flows with just a partial adaptation of AVs.