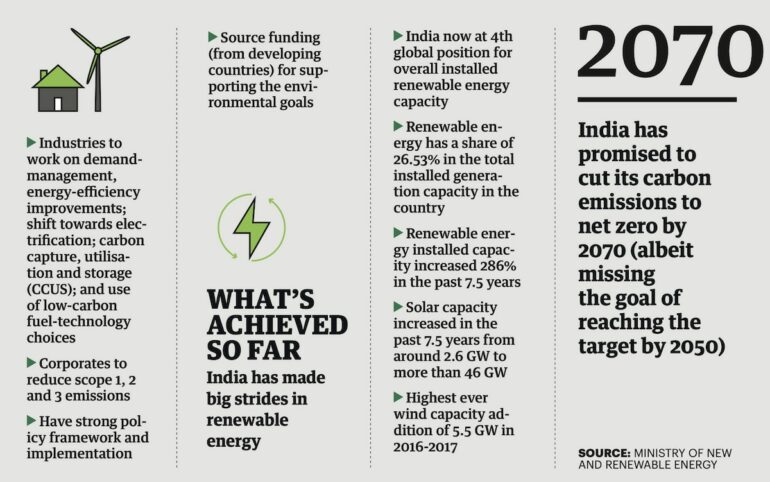 Despite India’s ambitious commitments on renewable energy output, steeper targets will be needed over the next few decades to wean the country away from its dependence on coal, according to new analysis.

India is the world’s second-largest producer, importer and consumer of coal after China, relying on the heavily polluting commodity for 55% of its energy needs. However, it has pledged during the UN Climate Summit in 2019 to generate 450 gigawatts of renewable energy and achieve 40% of cumulative installed power generation capacity from non-fossil sources by 2030.

“India already has ambitious renewable energy targets till 2030, but needs to have more ambitious long-term targets which will give a clear message to investors and stakeholders that coal is not sustainable,” said Christian Breyer, an author of the study and professor of solar economy at LUT University, a technology university in Yliopistonkatu, Finland.

According to the Ministry of New and Renewable Energy, India has the world’s largest renewable energy expansion program accounting for nearly 27% of installed capacity and reaching 175 GW of production in 2022.

The average annual growth rate of renewables in India has been around 15% while solar photovoltaic (PV) installations have grown by 26% annually since 2018, says the study, published this month in Nature Communications.

But it is vital for India to set long-term goals and envision a net zero emission energy system across the country says the study, which sets out to show that a renewables-based power system by 2050 is not only cheaper than the present coal-dominated system but will also provide reliable electricity to around 1.7 billion people.

Ashish Gulagi, co-author of the study and researcher at LUT University, said that the power sector in India has been the largest contributor to energy-related greenhouse gas emissions. “The dependence on low-quality coal used in highly inefficient power plants has resulted in air pollution, predominantly in cities, and aggravating other environmental issues,” Gulagi told SciDev.Net.

The new system projected to be in place by 2050 is to be based on solar PV, wind energy and hydropower, the study said. “This transition would address multiple imperatives: affordability, accessibility, and sustainability without compromising economic growth,” it added.

R V G Menon, energy expert and former director of India’s Agency for New and Renewable Energy Research and Technology, said that achieving low-cost electricity energy from a fully renewable-based power system, as envisaged in the study, would require a lot of careful study.

“Much depends on crucial decisions by policymakers as well as the speedy implementation of policy given that the country has enough coal to generate power, and that coal-based energy has the backing of big business,” Menon told SciDev.Net.

However, private investors are believed to be shying away from coal investments in recent times due to the associated risks and the shift towards sustainable technologies leading to many coal power projects being scrapped or abandoned, the study said.

Coal-based energy plants are shutting down for another reason—a shortage of fresh water for cooling. It is projected that two-thirds of the country’s power plants will face high water stress by the end of 2030. About 40% of coal power plants are located in water-stressed areas across the country, while the total water requirement for thermal cooling makes up more than half of the domestic water demand, according to the analysis.

In CompaniesTech
on 2 September 20201 min read

“As the country plans to fulfill high economic goals and achieve climate change targets, the power sector assumes an important role, as decarbonization of the power sector is key to reducing greenhouse gas emissions,” said Menon, pointing to the fact that India has a long history of commercial coal mining extending well over the last two centuries.