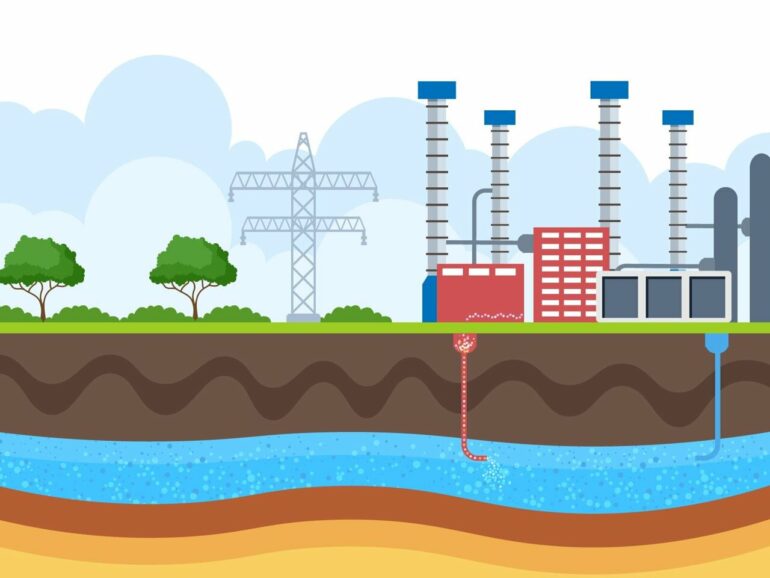 Beneath the Earth’s crust, super-hot rock holds the potential to provide clean, renewable energy called geothermal energy. This resource is just waiting to be tapped. However, the development of geothermal energy over the past couple decades has been hampered by significant upfront investment, financial risk, and a perceived cost higher than renewables like wind and solar. But that could all change if geothermal energy is paired with lithium extraction.

Research from Pacific Northwest National Laboratory (PNNL) shows that coupling geothermal energy production with lithium extraction could substantially lower the cost of geothermal developments and boost plant profitability. Plus, it would provide a way to extract high-demand minerals like lithium to manufacture batteries, electronic vehicles, and more.

“Geothermal development has been stagnant for the last 30 years due to economic and logistic constraints but coupling it with lithium extraction could make plants more profitable, faster,” said Dave Goodman, PNNL research analyst.

Zeroing in on the Salton Sea—an area with abundant geothermal potential and lithium reserves—the research team took a close look at how various finance, policy, and technology scenarios could affect the time to profitability and projected profits of geothermal plants in the region. Shorter permitting timelines, reduced construction costs, and government subsidization could all increase geothermal viability, but co-location with lithium extraction was shown to have the greatest potential to lower barriers and encourage successful future geothermal development.

Wringing water, and metals, from stone

In geothermal energy production, water—called brine—is heated by super-hot rock deep underground. When the brine is moved to the Earth’s surface, it cools rapidly, producing steam that turns turbines and generates energy. Then, the brine is returned to the ground, continuing the cycle. The United States has the largest known geothermal resource in the world, with an estimated potential to provide up to 10% of the total U.S. electricity capacity.

But geothermal resources at the Salton Sea don’t just offer renewable energy—the brine is full of minerals, including valuable metals like lithium, that could be extracted with the right technologies. Demand for lithium—a key battery ingredient—is already high and expected to skyrocket up to 40 times by 2040.

Currently, very little lithium is produced in the United States, which imports most lithium from Australia, Chile, and China. Creating a sustainable domestic supply of lithium has led researchers and developers to get creative about how and where to extract more lithium. One potential solution is to extract lithium from geothermal brine and a promising location is the Salton Sea in California.

“There’s a lot of optimism around future lithium extraction technologies,” explained Patrick Mirick, PNNL Earth scientist. “Our research shows that if these technologies work as planned, they’ll be a financial game changer for the geothermal industry.”

To determine just how much co-locating lithium extraction at geothermal power plants could potentially change the industry, researchers conducted a techno-economic analysis to project plant profitability over time in the Salton Sea. Looking at different timelines, financing options, and technologies, the researchers projected that incorporating lithium extraction would result in the biggest potential impacts for geothermal plants: decreasing the cost of electricity generation, shortening the time to plant profitability, and increasing net profits—potentially many times over. Such changes would remove significant barriers to development in the geothermal industry.

In 2020, the California Energy Commission (CEC) estimated that the subsurface rock in the southern Salton Sea region contained subsurface brine with the potential to supply 40% of the world’s lithium demand and generate over $7 billion U.S. dollars in annual revenue. The enormous potential of this region to produce clean energy and lithium is so promising that the CEC set up the Lithium Valley Commission to further investigate opportunities in this area.

Extracting lithium—and potentially other valuable earth minerals—from geothermal brine avoids many of the environmental and social concerns associated with current lithium extraction methods. Because the brine is already brought to the surface to support geothermal development, the additional impacts of adding lithium extraction to a geothermal plant are minimal and expected to have fewer environmental impacts than traditional hard rock mining while providing critical minerals for a clean energy future.

PNNL is a leader in developing mineral extraction technologies that could be used to collect lithium and potentially other rare earth minerals from geothermal brine. Developing more environmentally friendly lithium extraction technology would be a valuable step in meeting the growing demand for lithium.

Incentives supporting enhanced geothermal systems could increase the number of sites in the U.S. suitable for geothermal energy production. These approaches would support the growth of this renewable energy source to help meet baseload power needs for the electrical grid.

“Renewables like wind and solar could provide up to 90% of our clean energy needs, but beyond that, there are diminishing returns. Geothermal could help close the gap to achieve 100% clean energy because it provides a consistent supply of power and the potential for flexibility,” said Dhruv Bhatnagar, PNNL senior energy systems research engineer.

In a separate report, PNNL researchers found that reducing development costs through incentives, modernizing contracting options, and valuing the grid services provided by geothermal plants would help geothermal development to be competitive and profitable in less time.

One option for lowering the risks and costs of geothermal development is through a market-based approach that appropriately compensates for the characteristics of geothermal energy. For example, valuing geothermal’s firm capacity contribution in complementing low-cost but variable renewables, like wind and solar, could increase its market value and lead to a quicker return on developer investments, spurring industry growth.

“Finding ways to make geothermal more competitive on the market will open up opportunities to generate more clean energy in the future,” explained Bhatnagar. “This includes aligning markets and policies to leverage the value that geothermal can provide to the grid.”