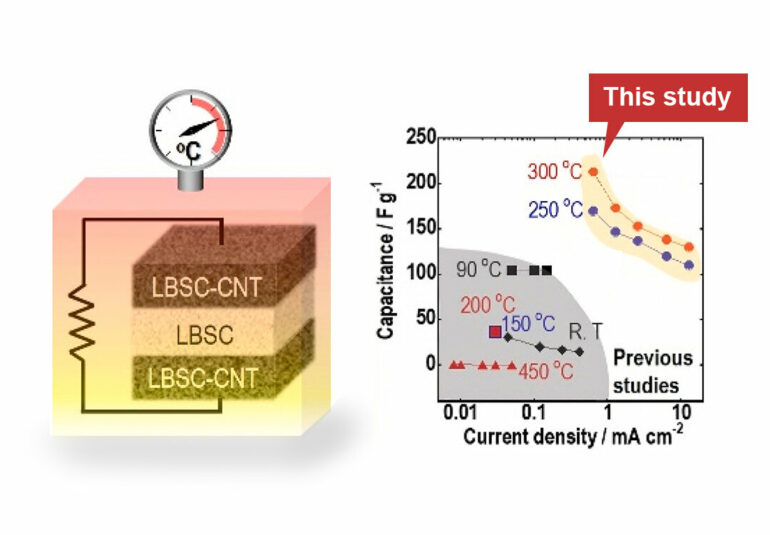 Capacitors are energy storage devices—consisting of two electrodes and an electrolyte—that are capable of rapid charging and discharging because of charge adsorption and desorption properties at the electrode-electrolyte interface. Because capacitors’ energy storage does not involve chemical reactions, their storage capacity is lower than that of lithium-ion batteries, but they are useful for power leveling for renewable energy that requires repeated charging at high currents, regenerative braking energy for trains and electric or hybrid cars, as well as instantaneous voltage drop compensation devices that prevent equipment failure due to lightning strikes. They are also expected to be used to store energy for wearable devices in the near future.

A research group led by Professor Akitoshi Hayashi at the Graduate School of Engineering, Osaka Metropolitan University, has developed a solid electrolyte that is highly deformable, allowing it to have a large contact area with an electrode, which was developed to be used for an oxide-based all-solid-state battery.

In this study, they fabricated a composite using the same highly deformable solid electrolyte and carbon, then used it to construct both electrodes for a bulk-type all-solid-state capacitor. This capacitor is capable of high current densities and high-capacity charging and discharging at temperatures of 200-300°C, creating the world’s first bulk-type all-solid-state capacitors. The researchers expect that their capacitor will be used to improve technology for high-temperature environments, which could not be developed previously due to these technical limitations.

“The key to realizing this capacitor was to take the solid oxide electrolytes that we have been developing for all-solid-state lithium batteries—which combine excellent deformability and lithium-ion conductivity—and apply them to capacitors,” explained Professor Hayashi.

In the future, the researchers hope to construct all-solid-state hybrid capacitors with even higher energy densities, by controlling the chemical reaction between a solid electrolyte and carbon, then combining them with positive electrode materials used in lithium-ion batteries.

The research was published in the Journal of Power Sources.

3 ways Congress could hold Facebook accountable for its actions

In Apps and WebComputer science
on 12 November 20214 min read