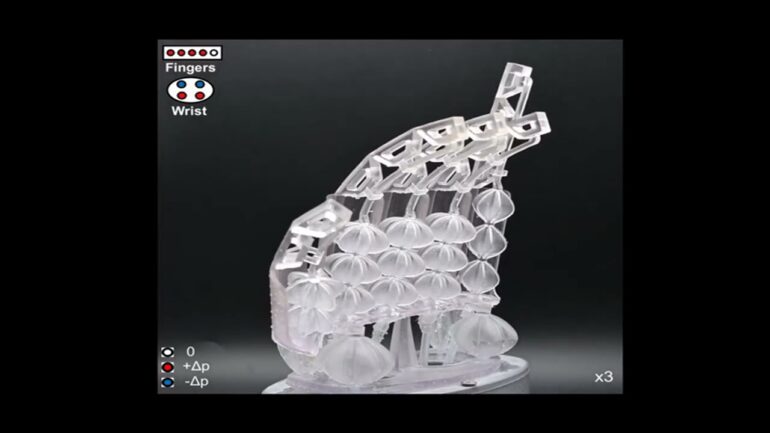 The Smart Polymer Materials Group led by Prof. Chen Tao at the Ningbo Institute of Materials Technology and Engineering (NIMTE) of the Chinese Academy of Sciences (CAS), in cooperation with Prof. Zheng Yinfei at Zhejiang University, have developed a hydrogel-based soft robot with adaptive deformation that can achieve multi-dimensional off-road locomotion on natural terrains.

This work was published in Research.

As a process of natural evolution, organisms have achieved versatile locomotion, such as walking, crawling and swimming to adapt to changes in their external environment. As an ideal candidate for biomimetic material, hydrogel can generate diverse biomimetic forms due to its excellent self-deformation and soft-tissue-like mechanical properties. However, activating this in-situ-deformation to tackle autonomous locomotion and actuate multiple tasks remains challenging.

Inspired by the self-growth and evolution of living organisms such as inchworms, a photothermal hydrogel layer containing Fe3O4 nanoparticles was grown on the surface of an isotropic poly(N-isopropyl acrylamide) (PNIPAm) sponge, thus forming an anisotropic bilayer structure via interfacial diffusion polymerization.

Upon the programmed near-infrared light irradiation, the anisotropic configurations of the bilayer hydrogel were reconfigured and reassembled to adapt to changes in external environments, exhibiting multiple degrees of deformation and various forms.

By virtue of spatially programmed deformation, a mortise-and-tenon interlock was dynamically formed via the interaction between self-deformation and rough terrains, when the hydrogel actuator bent or recovered. Thus, the hydrogel actuator can imitate the crawling of inchworms to generate periodic propulsion, realizing off-road locomotion on various artificial rough substrates and natural sandy terrains.

Benefiting from the adaptive deformation, the crawlable hydrogel actuator changed its volume and crawling mode with the synergy of every tentacle, thus adapting to the complex terrains including a mountain pass, a valley and a ridge.

Based on the assembly of several hydrogel motors, even a static cargo was activated and could crawl on the 2D rough substrate or overstep complex sandy terrains.

This strategy is a step forward for the design and development of soft robots, deformable materials and biomimetic devices.